The Airbus A330 is something of a dark horse in commercial aviation – incredibly popular but somewhat overlooked in the world of the Boeing 777 and the 787. It’s so unassuming and yet over 1000 have been delivered since its introduction in 1992 and the aircraft is popular with passengers and pilots alike. The A330 is everywhere it seems, except in the flight sim world. The A330 is suspicious by its absence. There are a few products available that are light on depth and horribly dated. So, thank goodness for X-Plane developer, JARDesign, which has recently released a brand new A330-200 for X-Plane 10, but is it any good?

First look
Having enjoyed the JARDesign A320 previously, I had an idea of what to expect with the A330 – I was not to be disappointed. On loading and activating the aircraft, I was greeted by the Airbus company livery. The A330 only comes with one livery but you can download others for free. The Airbus livery looks good and the external model is finished to a very high quality. This is the same with the A320. Moving inside to the cockpit, everything looks familiar. The common flight deck layout shared with the A320 and A340 is rendered in fantastic quality. The cockpit features high definition-style textures, somewhere around the 4096 x 4096 mark. Put simply, it’s gorgeous. In wet weather, the rain drops on the windscreen are pretty nice, just to add to the great cockpit textures.

Ground control to Major Tom
Before diving in for a flight, I have to talk about a few extras the A330 provides. Introduced with the latest release version of the A330 (V1.2r1 at the time of writing) is a set of ground vehicles that deal with everything concerned with preflight. Call the fuel truck to refuel the aircraft and it arrives, hooks itself up to the aircraft tanks and allows you to set the fuel load via a user display. Call for the steps and the aircraft doors open when the steps arrive. The animations are smooth as silk. There are plenty of vehicles that can approach the aircraft, from the usual cleaning and catering trucks, baggage carts and loaders, even to limo’s delivering those VIP passengers straight to the aircraft. 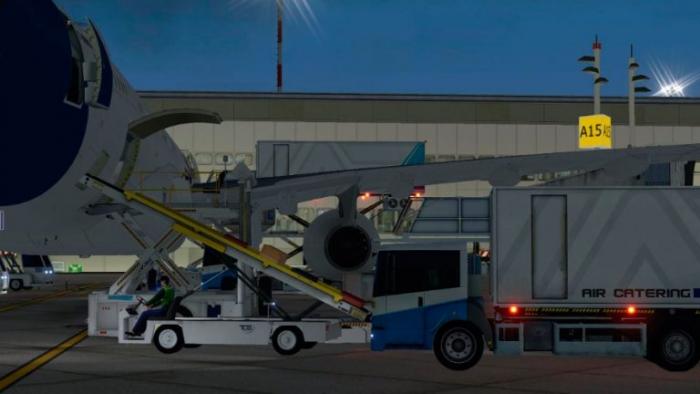 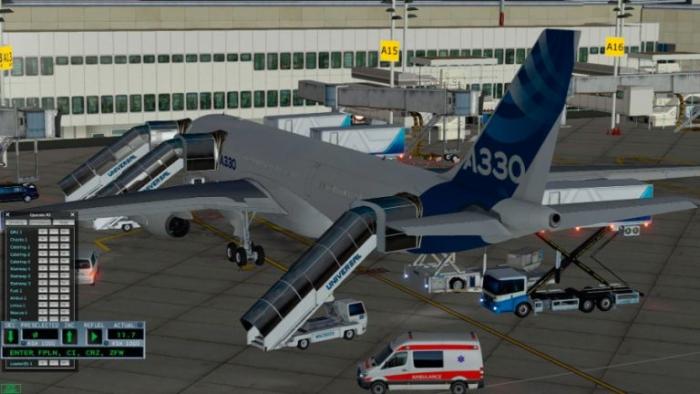 The ground services are a fantastic addition to this A330 package

Getting stuck in
It’s a good thing I’m familiar with the Airbus as there’s no tutorial provided with the A330. In fact, there’s not much in the way of documentation full stop. There are downloads available from JARDesign itself but this is the actual flight manual for the real aircraft, which is a scary place to start for the newbie. Anyway, jumping in, it’s interesting to see the subtle differences between the A320 and the A330. The overhead panel contains an extra battery for the APU for example. It’s all very familiar though and getting prepped for flight is fairly simple. If you’ve not flown the A330 or the A320 before, there’s a built-in co-pilot who will guide you through the checklist to help you out. The checklist is found on the captain’s window clipboard. It’s interactive, so once you are done with the pre-flight checklist, it will progress on to the next step. 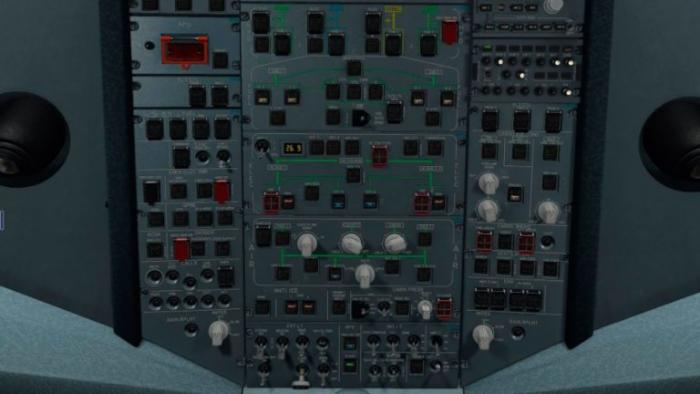 The overhead panel is very familiar, differing very slightly from the Airbus A320

It’s now time to program the MCDU. This is where many an Airbus flight sim falls down. While Boeing is more than happy to help out developers to create the FMC, Airbus is much more secretive. So the MCDU is difficult to work out. On the previous JARDesign A320, the MCDU had several bugs that really let the side down, so I was hoping the A330 was an improvement. Initial signs were not promising. Just looking at the MCDU, you can see that two buttons are blank. The secondary flight plan, ATC Comm buttons and functions are not modelled. The lack of the ATC Comm button is okay, but the ‘SEC F-Plan’ function is part of the preflight checklist and very useful if you are setting up a long flight and are unsure what the expected arrival runway will be. You can set up two approaches, switching if you need to as you get closer to landing. 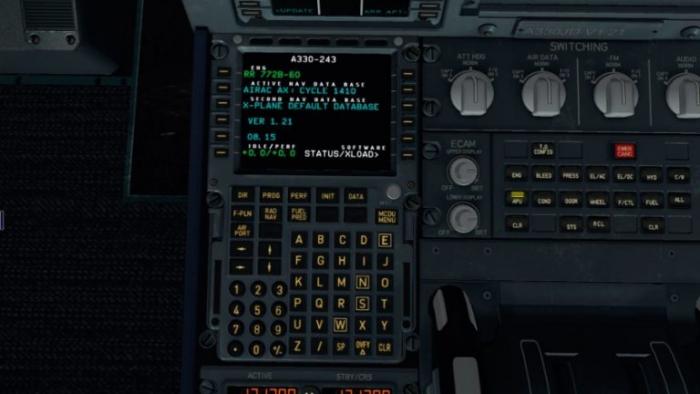 However, missing buttons aside and getting on with the flight planning reveals improvement over the A320 and further errors. The A330 now has the ‘Airways’ entry option working, which is better that the non-functional version on the A320. However, the implementation is half finished. Normally, you would use the Airways function to quickly enter the route. It works by entering your first airway on the left, say Q295. Then in the next space below, you enter the next airway. Once you’ve done that, the MCDU will fill in the entry waypoint on the right. This speeds up your route entry substantially. On the A330 though, you can only enter one airway at a time. So you have to enter the airway and the exit waypoint, insert that in the plan and then return to the Airways function to enter the next airway. For long routes this gets tiring. So while it’s an improvement on the previous A320, it still needs fixing. 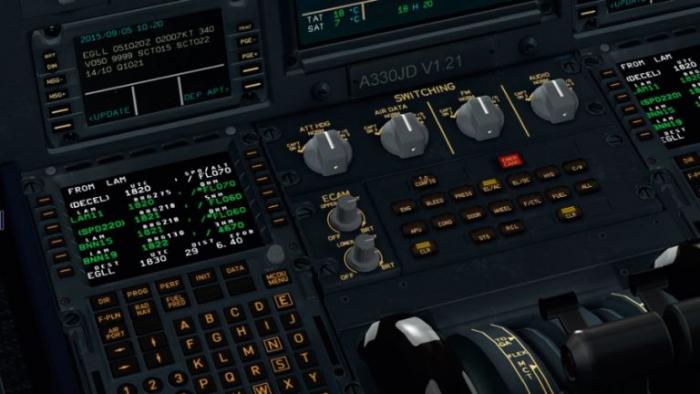 Altitude constraints displayed on the MCDU, though not on the ND 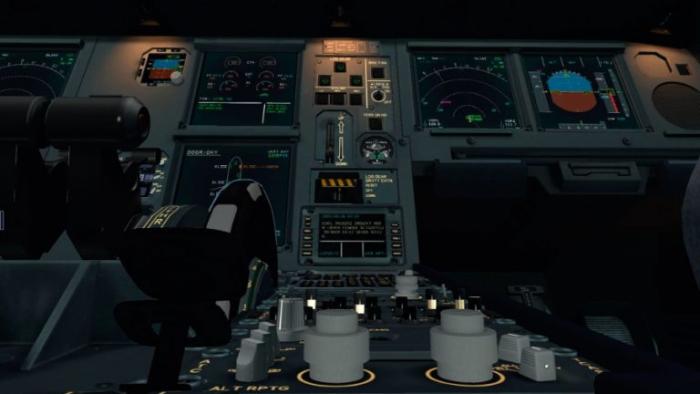 “There’s no doubt that JAR Design has gone to town with the A330’s cockpit. It is simply stunning”

With the flight planning in hand, JARDesign has provided a load manager of sorts. It’s selectable from the plugin menu and you get a loadout of the A330-200 along with the weight table. What is missing is a good performance calculator. The A330 needs a few things to see its V speeds. You can get the flap settings and trim from the load manager but without the Flex temperature you can’t set the V speeds.

The MCDU also contains a few configuration options, including settings for using high precision joysticks as well as options for adjusting the various aircraft sounds. Sounds are always an issue with X-Plane, the sound engine of which needs a major overhaul. JARDesign gets around this with the use of 3D sound plugins. 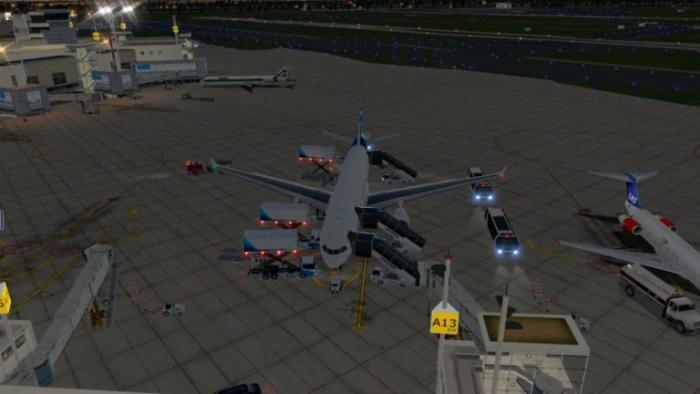 With the route programmed and the aircraft ready, I then called for pushback from the menu. A handy little control panel pops up on the left and allows you to control the pushback with ease. With the engines running, I then taxied out for take-off. The aircraft feels heavy, which is welcome and it takes a little bit more thrust to get moving than I’m used to. In the cabin I can hear a safety announcement playing, which is another nice touch. Time to get into the air though. I set the throttles and we’re off. Hand flying is a joy and the A330 flies well and feels stable under my control. Passing 6000ft, I switched the autopilot on and put my feet up. During the flight, my interactive flight attendant popped on to the intercom to keep me informed on the state of the cabin. Her English is a little off, including such phrases as: “I would like to report about the situation on the board. Passengers calm, it is alright now.” It’s both worrying as well as perplexing. Performing a manual landing is a joy and the A330 is an aircraft that you will just want to hand fly. 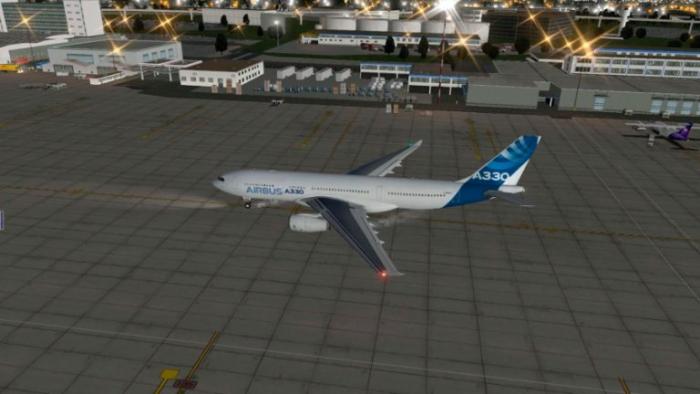 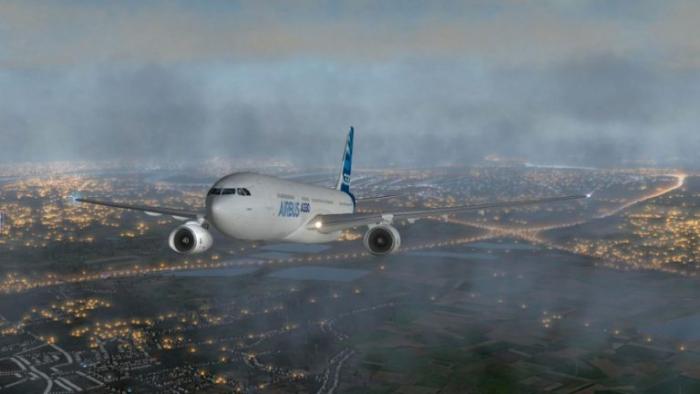 Summing up
The A330 is a cracking aircraft to fly and a flight sim version with depth was long overdue, however, the JARDesign A330 isn’t quite there yet as it has a few bugs. For starters, there’s the strange behaviour seen on take-off. On several take-offs, the autopilot wants to prioritise speed over altitude. It really should be a mix where both the speed and altitude climb gradually. It needs refinement if nothing else. Flying the departure manually is also made more difficult by the lack of constraints on the PFD. With the constraints display option chosen, there should be a text display along the route. There isn’t one. The constraints are indicated by the purple circles around the waypoints, but no text. Then there are the issues with the MCDU. The airways function needs work and the sec f-plan button should be there. Also the A330 doesn’t read X-Plane flight plans either, so you can’t load a standard flight plan in to the MCDU to save time. 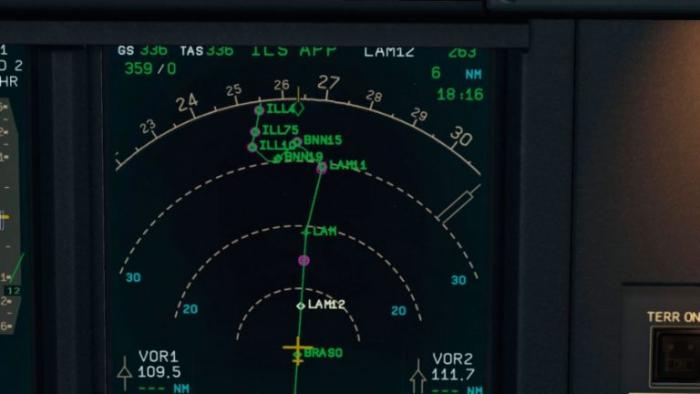 No constraint information is displayed on the ND. The purple rings should be accompanied by altitude or speed information

Turning to the rest of the package, the sounds, even with the 3D plugins aren’t that great, with the engine sounds suffering the most. The ground vehicles are not without faults either. While they’re a great addition, they have a tendency to drive through each other and the aircraft when arriving or departing. It’s a bit messy. The fuel loader also has bugs. On one long-haul flight, I calculated my fuel load to be around 35 tonnes. However, after loading up the aircraft as described on the fuel loader (sorting your flight plan, cruise level and cost index first), it told me I would run out of fuel before reaching my destination. Brimming the tanks with near double the amount of fuel didn’t help change the message. In the end, I discovered you need to add the fuel before you sort out the flight plan, despite what the instructions on screen tell you.

Finally, a word about those textures. While the textures in the cockpit look fantastic, they can quickly overload your graphics card. Over three screens, my texture load at one point was over 5GB – a full Gigabyte more than my 4GB 680 graphics card could handle. The result is a dramatic drop in performance. 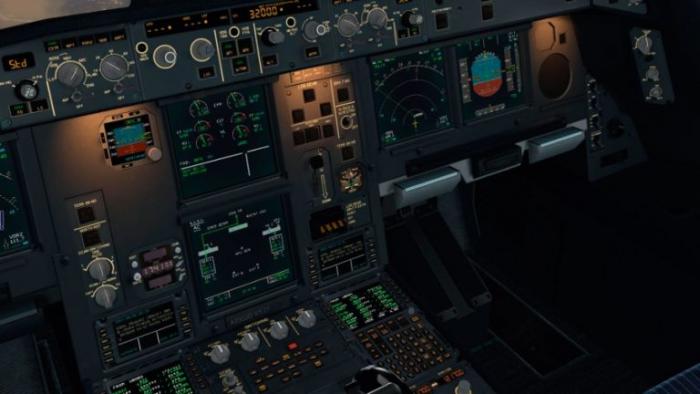 The night lighting is very atmospheric 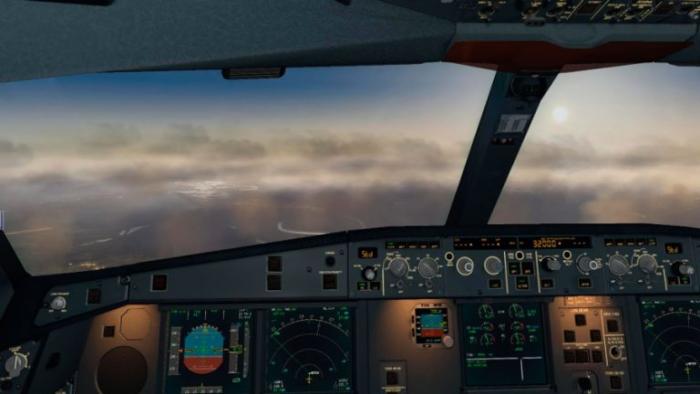 The view from the flight deck is excellent

It’s not all doom and gloom though. There’s no disputing that if your system can handle it, the A330 is beautiful to look at. The night lighting is stunning and the extras like the co-pilot and cabin crew help make this a great aircraft to enjoy. It just needs some work to bring it up to scratch. JARDesign will do that and service packs and updates are available through the website. With the errors fixed, the A330 would be a must-have; as it stands, it’s still a great aircraft. 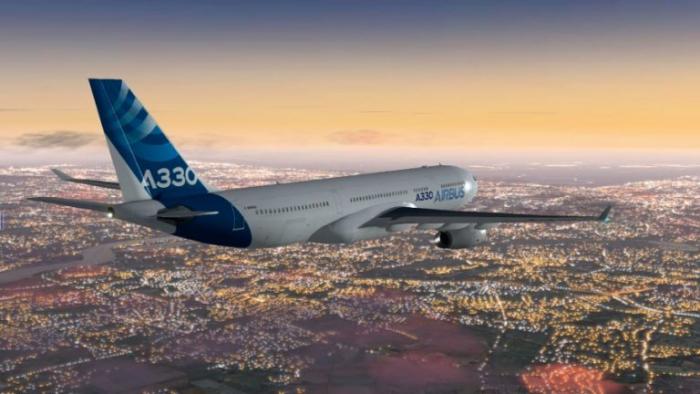 A thing of beauty, let down by a few silly bugs