Since 2002 the unique An-225 aircraft has been in regular commercial use, ofering oversize and super-heavy transportation capability like no other. Alexander Mladenov and Krassimir Grozev report 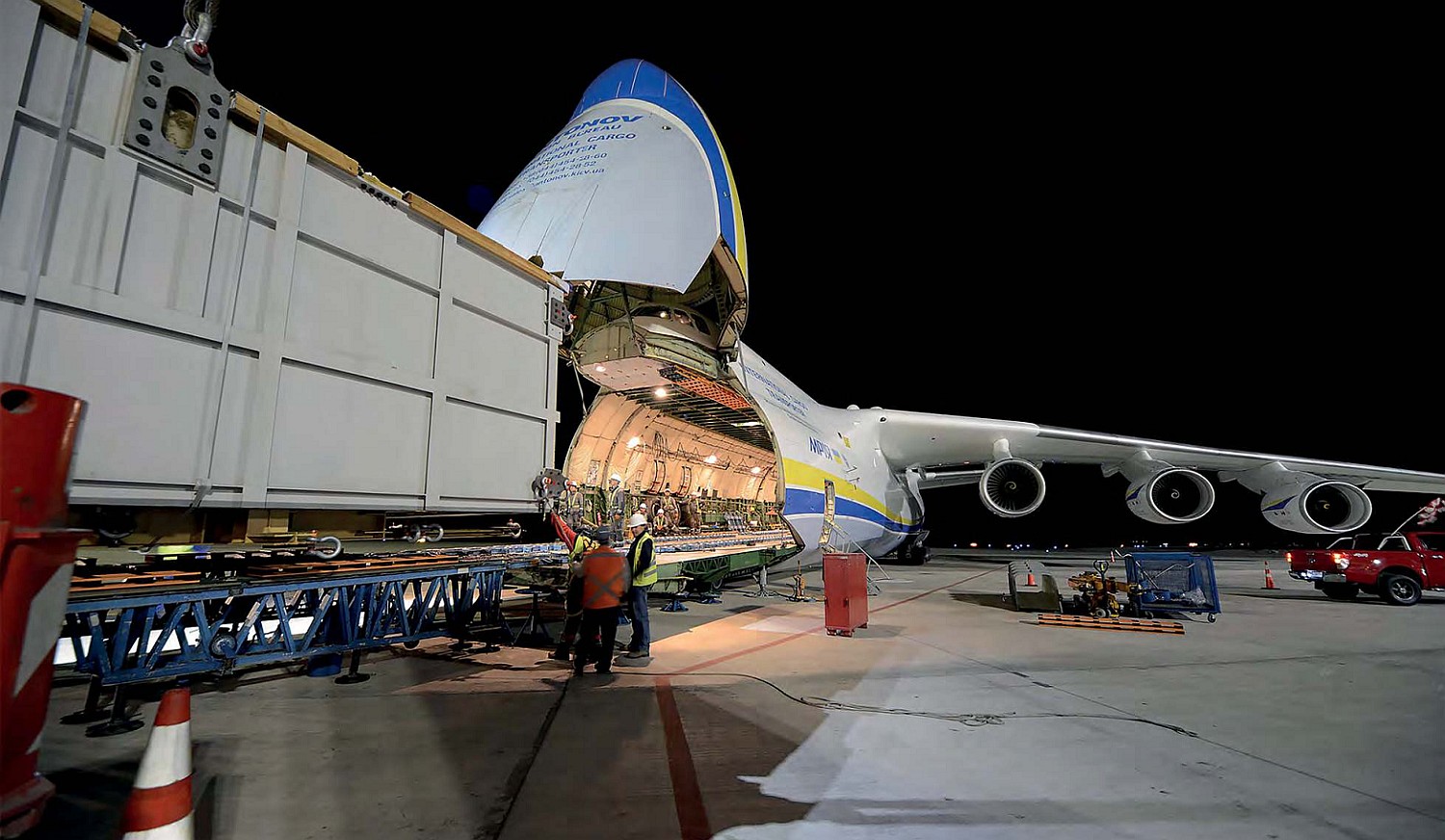 The Mriya is capable of carrying a payload weighing up to 247 tonnes.
Antonov Airlines

At the beginning of the new century, the six-engine monster operated by Antonov Airlines took the global air cargo business to new and heavier heights. The 640-tonne aircraft underwent major refurbishment, was test-lown and received its Ukrainian type certiicate immediately before the 2001 Paris Airshow. It was eventually used on a commercial contract with the United States Department of Defense to deliver 216,000 prepared meals, on a single flight, to Thumrait, Oman for US military personnel based in the region in January 2002.

The An-225’s development was made possible thanks to the then Soviet space industry’s requirement for an aircraft capable of transporting large components of the Energia-Buran re-usable space shuttle system. Produced at diferent places in the former Soviet Union, various components had to be transported by air to Baikonur space centre in Kazakhstan. The new aircraft was to be large enough to transport the 15-tonne, 59m (194ft) long, 8m (26ft) diameter main unit of the Energia space launcher. In addition, the new aircraft had to have the capability to return re-usable Buran space shuttles back to Baikonur in the event of a landing at any one of the various back-up airields located throughout the Soviet Union.

In order to save money and time, the Kiev-based Antonov Design Bureau, the main design organisation for heavy transports in the Soviet Union, was tasked with the design of the new machine and decided to use the four-engine An-124 Ruslan as the baseline. Victor Tolmachev, the An-124’s chief designer, was appointed to head the development work which was launched with a Soviet Council of Ministers decree dated May 20, 1987.

Tolmachev choose to retain the baseline An-124 design unchanged, and only introduced changes required to render the new aircraft capable of external transportation of oversized and superheavy loads. 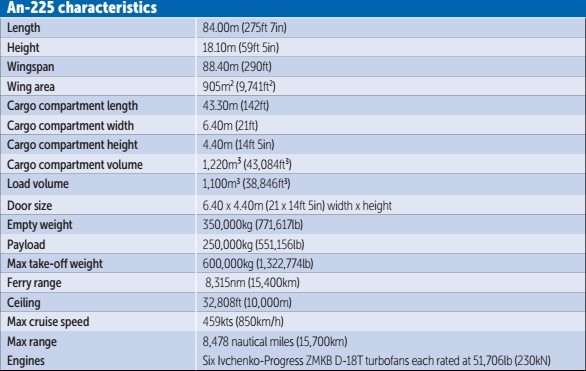 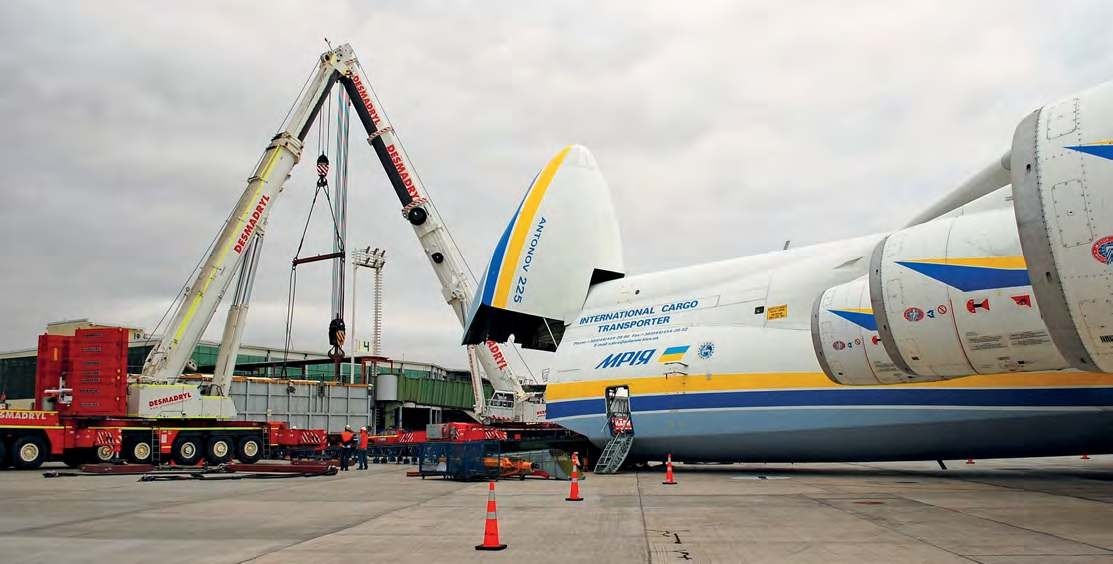 To save weight, the rear ramp was removed, which allowed streamlining of the rear fuselage to reduce drag and improve range performance. Carriage of outsize loads necessitated the use of a twin-fin empennage.

Wing area was increased by adding plugs connected to the centre-wing section of a standard An-124 wing with minimum change; a clever design solution that provided a 30% wing area increase and allowed installation of six Ivchenko-Progress D-30T turbofans, three under each wing.

Among the few all-new features integrated on the An-225 is the A-825M fly-by-wire system.

Beyond the design changes listed above, the An-225 design retained a high degree of commonality with the An-124, including the cockpit and most, if not all, of the aircraft’s general systems.

High commonality allowed the first An-225 to be built in a compressed timeframe, with the roll out reported on November 30, 1988 and the maiden flight made on December 21 that year in the capable hands of Antonov Design Bureau test pilot Alexander Galunenko, together with 17 more crew members on board.

The heaviest and largest aircraft ever flown wore the Soviet civil registration CCCP- 480182 and got the name Mriya (Dream), while its NATO reporting name is Cossack.

In its original guise the aircraft saw little work, transporting components of the Energia-Buran system. It was displayed at the 1989 Paris Air Show carrying the Buran space shuttle, while still undergoing its state testing effort. 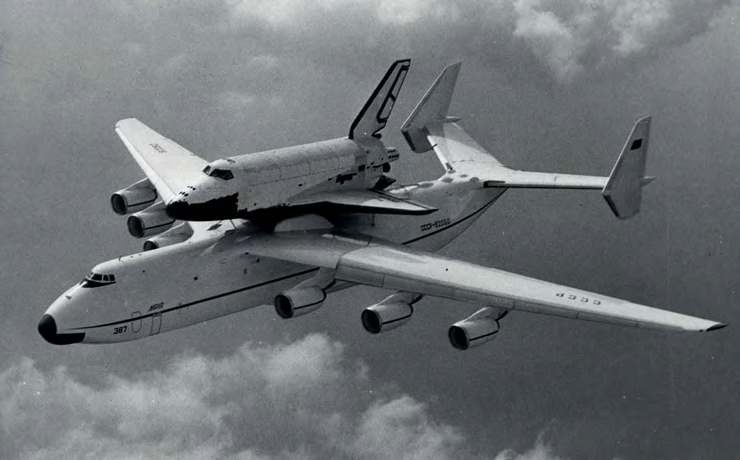 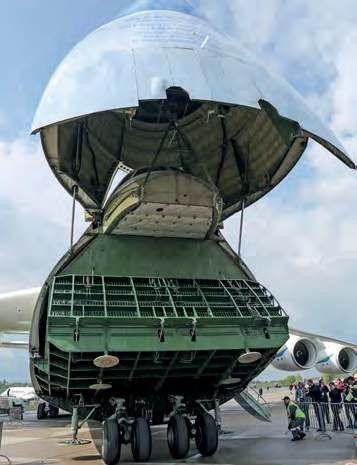 The An-225 is available for airlifting unique pieces of cargo beyond the economic capability of an An-124.
Alexander Mladenov

The An-225’s use for ferrying of outsize and super heavy cargoes commenced in May 1990 with the transportation of a T-800 bulldozer weighing 103 tonnes between Chelyabinsk and Yakutia in the Soviet Union. In 1991 the An-225 flew humanitarian flights to transport medical equipment from the United States and Canada to the Soviet Union. After the Soviet Union break-up in 1991, the Antonov Design Bureau saw itself based in the newly-independent state of Ukraine. Due to the lack of funding, the An-225’s testing continued at a slow rate while the main customer for its oversize and superheavy airlift services, the Energia-Buran space system, was shelved in the early 1990s. In this uneasy situation, some exotic concepts were proposed for its future use, such as a launch platform for space missiles and modification to a passenger transport aircraft. 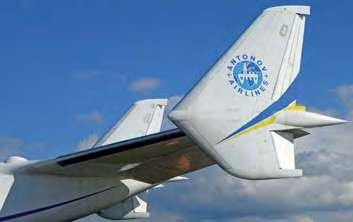 The Mryia has a twin-fin empennage introduced to render it capable of transporting large-size loads, a capability not used since the monster’s introduction to commercial service in 2001.
Alexander Mladenov 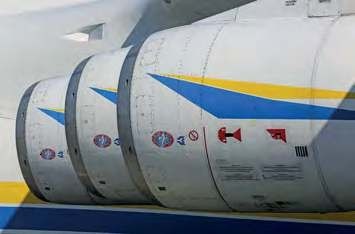 The six D-18T Series 3 turbofans burn an average of 20 tonnes per hour in cruise flight, which is twice that of the four-engine An-124. During the first hour of flight fuel consumption can be as high as 30 tonnes.
Alexander Mladenov

In April 1994, the An-225 discontinued fflight operations and was put in long-term storage, having racked-up 339 flights and 671 flight hours. Work on the second example, about 60% complete, was also discontinued. Subsequently, the first An-225 was used as a spare parts source for the fleet of An-124s operated by Antonov Airlines, the commercial air transport arm of the Antonov Design Bureau.

In fact, the booming business of Antonov Airlines, a well-respected company operating in the outsized and super-heavy cargo transportation market with a fleet of six An- 124-100s, eventually contributed to breathing a second life into the Mriya after six years in storage. Restoration work commenced in the summer of 2000, with an investment of about $20 million to return the An-225 to serviceable condition and obtain Ukrainian civil type certification for commercial operation. Design improvements included engine noise reduction measures and strengthening of the cargo floor structure.

Ffirst flight after the comprehensive restoration took place on May 7, 2001, and in early June the An-225 received its type certificate. A record flight was made on September 11 that year, with a cargo of 253.82 tonnes over a 540nm (1,000km) closed route.

The first commercial flight for the United States Department of Defense (DoD) followed on January 3, 2002 between Stuttgart, Germany and Thumrait, Oman. In early January 2002, another flight for the US DoD involved airlift of military supplies between Munich, Germany and Bishkek in Kyrgyzstan.

The An-225 had a slow start in the commercial world and reportedly failed to meet the expectations of Antonov Airlines for profitable and sustainable operations. Its commercial utilisation was sporadic, with prolonged periods on the ground for heavy maintenance or upgrades. In addition, the giant six-engine freighter proved to be expensive to operate, with direct operating costs nearly twice that of the An-124. In 2017, the cost per flight hour for commercial transportation was between $50,000 and $60,000, which renders the Mriya among the most expensive aircraft in the world.

As was to be expected, the An-225 is only used for unique operations where either other transport aircraft cannot do the job or the cost of a job would be prohibitively expensive because of the need to make additional flights with smaller types of aircraft to airlift the same total amount of cargo, which the An-225 can transport in a single flight.

Commercial operations usually involved single loads that are too heavy for the An-124 or the size of the load does not permit the use of any other transportation means. The first such unique load – an industrial electrical transformer weighing 138 tonnes in addition to 37 tonnes of other cargo – was flown from Linz, Austria to Williams Gateway Airport in Arizona on March 23, 2003.

A week later the An-225 was used to airlift a 135-tonne air conditioning unit from Houston, Texas to Dubai in the United Arab Emirates.

A truly unique An-225 flight took place on June 16, 2004. Heavy construction equipment weighing 247 tonnes was flown from the Czech Republic’s capital Prague to Tashkent in Uzbekistan. On its take-offfrom Prague, the Mriya hit its maximum 640-tonne take-offweight, and had to make two refuelling stops en route to Tashkent.

Then the heaviest-ever single cargo load – a 187.6-tonne electric power generator – was flown from Frankfurt, Germany to Yerevan in Armenia on August 11, 2009.

Some of the An-225’s more recent exploits include airlifting 16 T-72A main battle tanks from the Czech Republic to Nigeria, involving four flights in January 2015, each with four tanks aboard (representing a payload of 168 tonnes). The longest ever commercial service took place between May 10 and 15, 2016 – a 8,360nm (15,500km) range flight between Prague and Perth in Australia, to ferry a 117-tonne electrical power generator; the journey was accomplished with four refuelling stops.

Commercial use of Antonov’s six-engine freighter, has however, proven to be sporadic, with less than 20 flights undertaken each year: none at all in 2017. Earlier this year, the An-225 underwent a navigation suite upgrade and in April and May logged four commercial flights. Most recently in July, the Mriya was contracted to airlift six 160-tonne electrical power generators from Chile to Bolivia.

The low utilisation to date has precluded completion of the second An-225 because the huge investment required cannot be economically justified; the aircraft remains at the Antonov plant in Kiev. 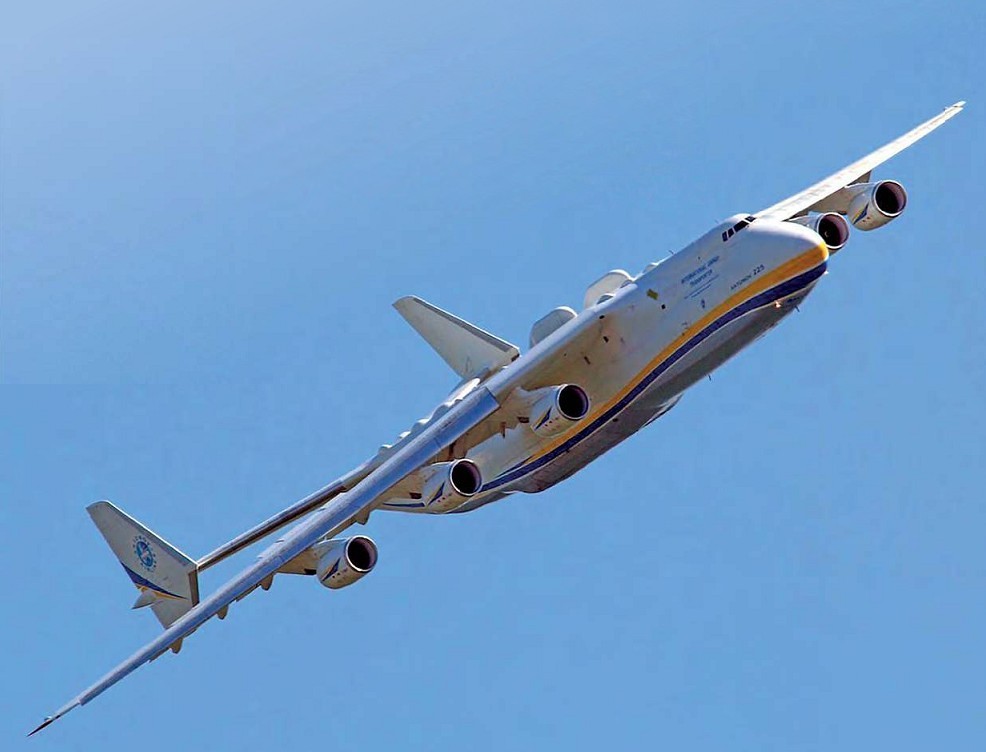 The 640-tonne flying monster was heavily-refurbished, test-flown and received its type certificate in June 2001; this effort is believed to have cost Antonov and partners in excess of $20 million.
Antonov Airlines

”The heaviest-ever single cargo load – a 187.6-tonne electric power generator – was flown from Frankfurt, Germany to Yerevan in Armenia on August 11, 2009.”