386 The number of the US Air Force’s future?

WHEN SECRETARY of the Air Force, Dr Heather Wilson and Chief of Staff General David Goldfein finished speaking at the annual Air Force Association conference in Washington DC on September 17 and 18, everyone received a coffee mug, inscribed with the US Air Force logo and the number 386.

What’s relevant about the number 386? It is the number of combat squadrons the Air Force estimates it needs if it is going to be capable of carrying out the missions it is responsible for under the National Defense Strategy (NDS), released earlier this year. General Goldfein said 386 was number of squadrons needed to be “simultaneously able to defend the homeland, maintain nuclear deterrence and nuclear command, control and communications, while able to defeat a peer threat, and at the same time, being able to deter a near-peer threat and maintain the campaign’s momentum against violent extremism”.

Congress requested a study that led to 386 in March of this year. Secretary Wilson said: “Five or six more studies are due to be turned in to Congress by March. We have done a lot of modelling, simulation and analysis.”

The number 386 is the result of a force sizing study, counting the number of squadrons needed to meet Goldfein’s requirements independently of real-world concerns, such as what specific type of aircraft would equip the squadrons, how big the squadrons would be, how long it would take to build the aircraft, who would fly them (remember, the Air Force is still facing a shortage of experienced pilots) and how much this would all cost in procurement, operations, maintenance and construction (aircraft need hangars and ramp space) dollars.

General Goldfein said: “Our follow-up work will be costing out, determining the number of [aircraft] tails, number of pilots, number of maintainers, required.” He called the result, “a clear-eyed assessment of a world that has returned to an era of great power competition”, one that represents a 25% increase from the current force level. It gives the Air Force an aspirational force structure goal that does, indeed, fit on the side of a coffee mug, like the Navy’s 355- ship fleet and the Army’s 490,000 active-component personnel. The Air Force is setting a claim on a significantly expanded force structure.

Secretary Wilson said: “We are not naive about how long it will take us and the budget required for the force we need.” There is no concrete plan to grow the Air Force to 386 squadrons. Indeed, with the US defence budget currently likely to be at a peak and the bills for the ‘bow wave’ of Air Force procurement of new aircraft that had been planned for years due to arrive, 386 squadrons may well prove to be unachievable even though it is what the Air Force requires.

The thinking behind the 386-squadron force structure provides insights into what the Air Force sees as the nature of future warfare. While the highest percentage growth is in bombers, adding five squadrons to the nine currently combat coded suggests the Air Force does not think the NDS priority of readiness for conflict with peer competitors – which are all nuclear capable – will affect the current limits on the number of nuclear-capable bombers and strategic missiles. An additional five bomber squadrons would not be enough to sustain Cold War era nuclear alerts once again.

Nor is the Air Force going to shift the weight of its future air power strike capability away from its fighters, even though these have to be forward based in a future conflict. Chinese intermediate-range ballistic missile numbers are unconstrained by arms control limitations. These have the potential to close fighter bases within range of such a conflict.

Even though the Air Force’s jetpowered airlift fleets are ageing, they would not be substantially increased to reach a 386-squadron force structure, even though there are no major forward deployed ground forces (or large prepositioned equipment stocks) in areas likely to be involved in a confrontation with a peer competitor. The projected increase in the tanker fleet, however, suggests the Air Force may see its need in future conflicts not so much as bringing forces in to theatre, but in enabling forward-deployed airpower to have greater reach over a large theatre.

In a future where surface-to-air missiles with a range of 600km (323 nautical miles) are likely to challenge US airpower, both the tankers and the aircraft they refuel will have to be concerned with survivability, a consideration that also influenced the choice of squadrons for build-up (including a spike in combat search and rescue units, needed for a highattrition conflict).

Goldfein said: “In the high-end fight against an adversary with an IADS [integrated air defence system], standoff, global reach and ISR [intelligence, surveillance and reconnaissance] capabilities ought to be in huge and significant demand.” However, the large increase in ISR capabilities comes at a time when, as Wilson said, the Air Force is looking at a “move forward in disaggregating sensors and battle management”, asking, “now that everything is a sensor, how do you network all this information in a different way so you can do this in contested airspace?”

Light attack is one mission set where the force structure is likely to grow, but where within the 386 combat squadrons is not immediately apparent. They could account for five of the seven additional fighter squadrons and perhaps one or two of the additional special operations squadrons. Alternatively, they may be considered part of the training force and support base and so not counted at all in the 386 squadron figure. 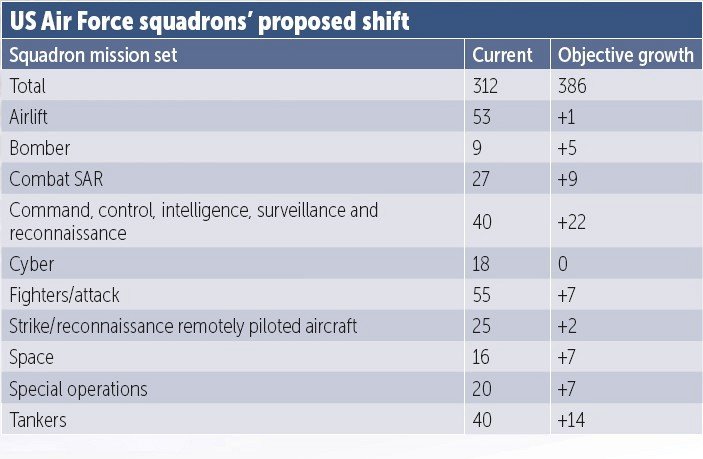 While Washington is setting out what the Air Force will need to carry out the requirements of the NDS in 2030, the US Air Forces Pacific Command (PACAF) has to consider a brutally short timeline: be ready to fight tonight.

One thing remains certain: if PACAF is called on to fight, it will do so as part of a coalition. Its new commander, General Charles Brown Jr, is highly experienced in bringing together and using multinational airpower from his previous role as deputy commander of Central Command Air Forces (CENTAF). He was in part responsible for running coalition air operations over Iraq and Syria, as well as the logistics and diplomacy that made them possible.

Speaking about his first visit to Australia in his new command, General Brown said he met Australian Officers he had worked with in the Middle East: “At CENTAF, [you drink] a lot of tea, building relationships so you are not cold-calling in a crisis. Doing coalition warfare, you need to share information. It is hard to bring a partner along with you if you can’t communicate.”

The recent Exercise Valiant Shield 2018 on Guam was United States only. PACAF has had to adapt to the highly publicised cancellation of exercises with the Republic of Korea. It may not have the resources for coalition activities that Europe currently has. Speaking at the Air Force Association event on September 18 Brown said: “The Pacific does not have EDI [European Defence Initiative] funding.” Despite that, he is looking at “coalition operational concepts for great power competition, to strengthen alliance and partnerships, train and exercise. Working with coalition partners means working out how we actually improve capabilities to work with them, including sharing information and TTPs [tactics, techniques and procedures] of how we operate, how we think alike and operate alike. The more we exercise, the more dialogue improves how we do things on a daily basis throughout the spectrum [of operations], whether in a major conflict or a humanitarian response.”

Coalition dynamics in the PACAF area of responsibility are also being driven by the arrival of F-35 Lightning IIs. The US Marine Corps is currently operating F-35Bs from Iwakuni, Japan. Australia, Japan and the Republic of Korea are all getting ready for F-35As, an operational fifth-generation fighter capability. Brown said: “Enabling coalition airpower is operating the same equipment … We are going to have F-35s in Alaska, a concentration of fifth-generation capabilities along with [training] ranges. In looking at our fifth-generation capabilities, do we have a fifth-generation mindset? As well as being a fighter, the F-35 is a capable sensor that can push information to fourth-generation fighters and our partners. This makes the ability to train together important.”