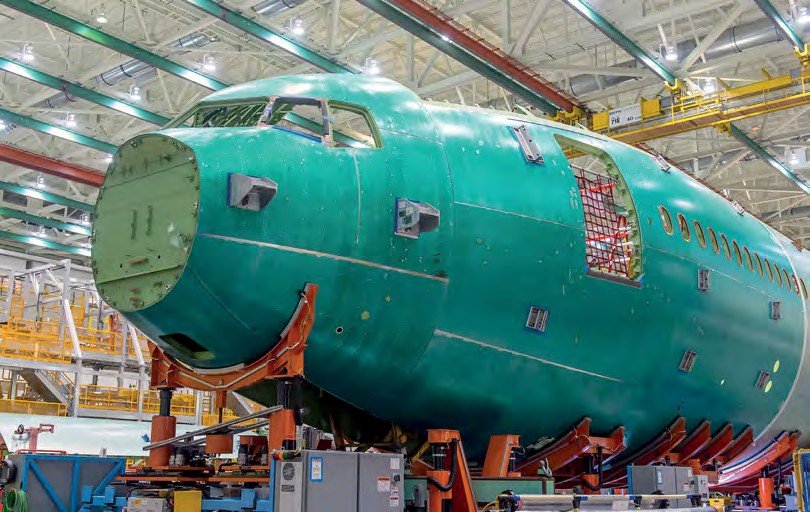 The forward fuselage section of the first Boeing 777-9 airframe, which will be used for static testing, under assembly at Everett.
Boeing

Boeing has released photos showing the forward fuselage section of the first 777-9 at Everett. The wings for this static test airframe and the first flight test aircraft, the second 777-9 to be assembled, are in production. Assembly of the fuselage for the first flight test aircraft is due to begin later this year, a Boeing spokesperson told AIR International. Boeing’s target is to fly the 777-9 early in 2019.

Meanwhile, newly updated provisional airport planning documents for the 777-9 and 777-8 provide further details about the functionality of the folding wingtip mechanism (FWT) designed for the 777X. During taxi for departure, the 777X will taxi with the FWT folded.

Once passing a predetermined location to ensure clearance from ground objects, the flight crew will manually initiate the command for the FWT to extend and lock to the take-off position prior to the holdshort line. The document reads: “Due to the unique geometry of each airport, it will not be practical to automate the extension of the FWT and the extension action will be left to the flight deck crew for manual operation when required.”

On landing, the FWT control logic will automatically fold the wingtip after the aircraft has touched down and ground speed is below 50kts (92km/h), which will take 20 seconds in normal conditions.

In the event of non-normal conditions, the crew will be alerted by a message from the engine indicating and crew alerting system and a non-normal FWT operation plan will be invoked. For example, in the event of a high-speed rejected take-off, the FWT will automatically fold if the aircraft achieves a rejected take-off (RTO) ground speed of 85kts (157km/h) or above, with the wingtip folding once the aircraft has decelerated below 50kts ground speed. The 85kts threshold is the same threshold for activating RTO autobrakes and speed brakes. Mark Broadbent