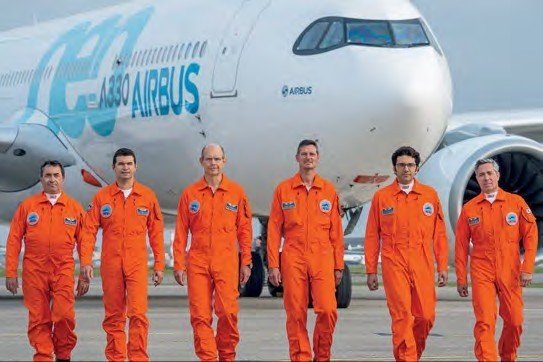 WHEN AIRBUS launched the A330neo (new engine option) at the 2014 Farnborough International Airshow, the company planned for the first customer aircraft to be delivered in the fourth quarter of this year.

Airbus told AIR International: “The A330neo also off ers the flexibility to seat from around 200 seats up to 440 passengers if needed. The aircraft can also efficiently serve markets on sectors from as short as 30 minutes, to over 15 hours flying time.”

The higher capacity has been achieved due to a key difference between the A330neos and their forebears: the Airspace cabin interior. Airbus has introduced various enablers to free up more usable cabin space to achieve the greater capacity, one of which is a relocated lower-deck mobile crew rest compartment.

For passengers, Airspace provides HD in-flight entertainment and connectivity and increased overhead storage space. Airbus claims the A330neo cabin will be 3dB quieter than the 787’s and: “Each passenger can enjoy a significantly better actual comfort level and in-flight experience.”

Other differences from older A330s (which are now marketed as A330ceo, or classic engine option) are new Rolls-Royce Trent 7000 engines, wings and aerodynamic changes.

With their 112-inch (2.8m) fan diameter, the Trent 7000s are one of the most noticeable visual differences with A330ceos. These engines feature a slower-rotating front fan with a bypass ratio of 10:1 compared with the typical 5:1 ratio, a new zero-splice inlet, a composite nacelle and a fully faired pylon.

The A330neo variants’ wings are wider, 64m (209ft) compared to the A330ceo’s 60.3m (197ft 8in), and feature the Sharklet fuel-saving devices for the wingtips similar to those on the A350. Airbus said: “The Sharklets on the A330neo are specifically designed for this aircraft. Therefore, they are not identical to the A350’s. We would say that [the] design draws from the technology of the devices developed for the A350.”

Airbus is making big promises about the savings the new generation will provide. The company claims the aircraft will burn approximately 25% less fuel per seat and proportionally lower CO2 emissions relative to previous-generation competitor aircraft in its size category such as the Boeing 767 and 777-200ER and 14% better fuel burn (as well as 400 nautical miles/740km extra range) compared to the A330ceo.

Airbus also claims it will off er: “better economics than the latest competing new aircraft such as the 787. The A330neo will have up to 15% lower direct operating cost per seat than the 787.”

The A330neos will share a common type rating with the A350 XWB family and have 95% airframe spares commonality with the A330ceo. Airbus added: “It will also off er 5% reduced airframe maintenance costs, thanks to further evolution of the scheduled maintenance programme. The latter includes fewer tasks, longer intervals between some checks and a reduction in man-hours over the typical 12-year maintenance cycle for new parts, such as the engine pylons and some sections of the improved wing.” 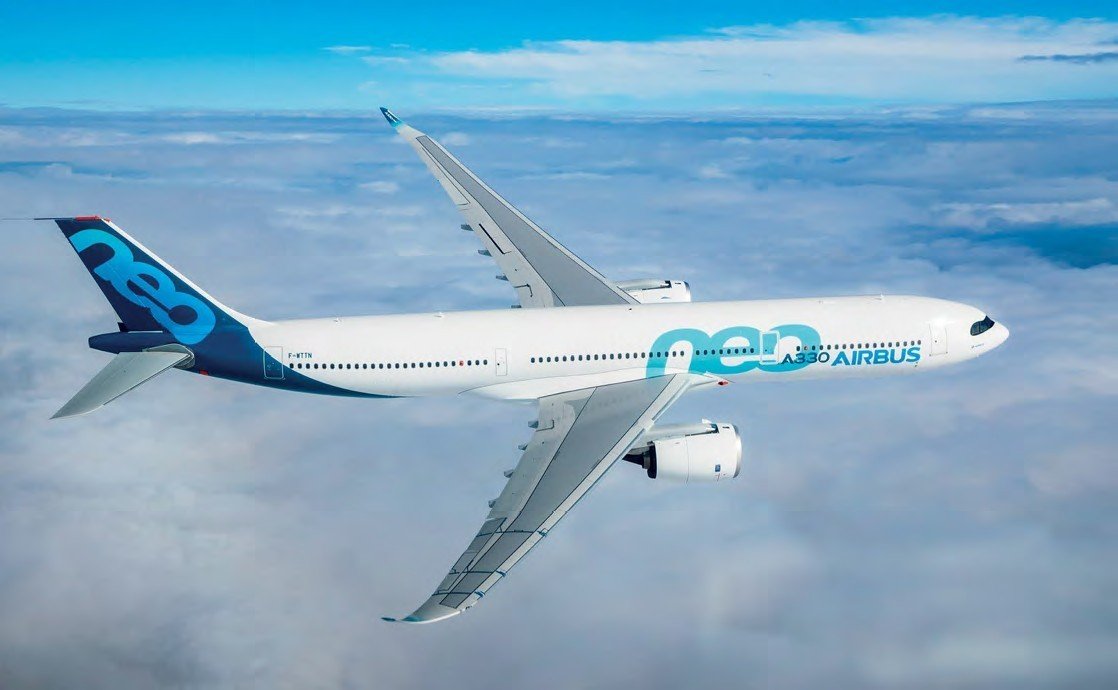 This aircraft, F-WTTN (msn 1795), pictured here during its first flight, is one of two A330-900neos that will be used during a 1,100-flying hour certification testing campaign for the variant.
S Ramadier/Airbus

There is crossover with the A350 (and also the A320neo) with a new electrical engine bleed air system that replaces pneumatic controls with full electrical regulation, and there’s a common cabin intercommunication data system with the A350

Airbus told AIR International: “A330-900 msn 1795 will be dedicated to handling qualities, performance, systems and flight control laws validation. This aircraft will perform the cold-weather campaigns, entry into service preparation and will be fitted with the full flight-test instrumentation [FTI]. The aircraft will also be fitted with the dual head-up display [HUD] cockpit system, Honeywell FMS and satcoms, and Messier- Goodrich brakes options.”

Airbus said: “A330-900 msn 1813 will be dedicated to validating aerodynamic and engine performance, the autoland function and will perform route proving, ETOPS [extended-range twinengine operations] and hot-andhigh campaigns, as well as airline operations validation.

“The aircraft will be fitted with the full FTI and the various avionics functions, and will introduce testing of the Thales FMS, Iridium satcom and Honeywell brakes options. Msn 1813 will also feature the new Airspace ‘Refresh’ lavatory module.”

There will be an extra 300 hours for the A330-800’s certification test campaign, which will start next year using msn 1888 (registration to be confirmed). Airbus said this aircraft, “will feature the full FTI, the dual HUD, Honeywell FMS and satcoms, Messier-Goodrich brakes and the full suite of activated avionics functions” comprising FLS, GLS, ATSAW, T3CAS and ROPS. Certification of the A330-800neo is planned for 2019.

The first series production A330-900neo to be delivered to TAP following certification will be CS-TUA (msn 1819). During flighttest activities prior to its service entry, this aircraft will be fitted with a light FTI for production and cabin checks to validate the Airspace cabin and air conditioning performance.