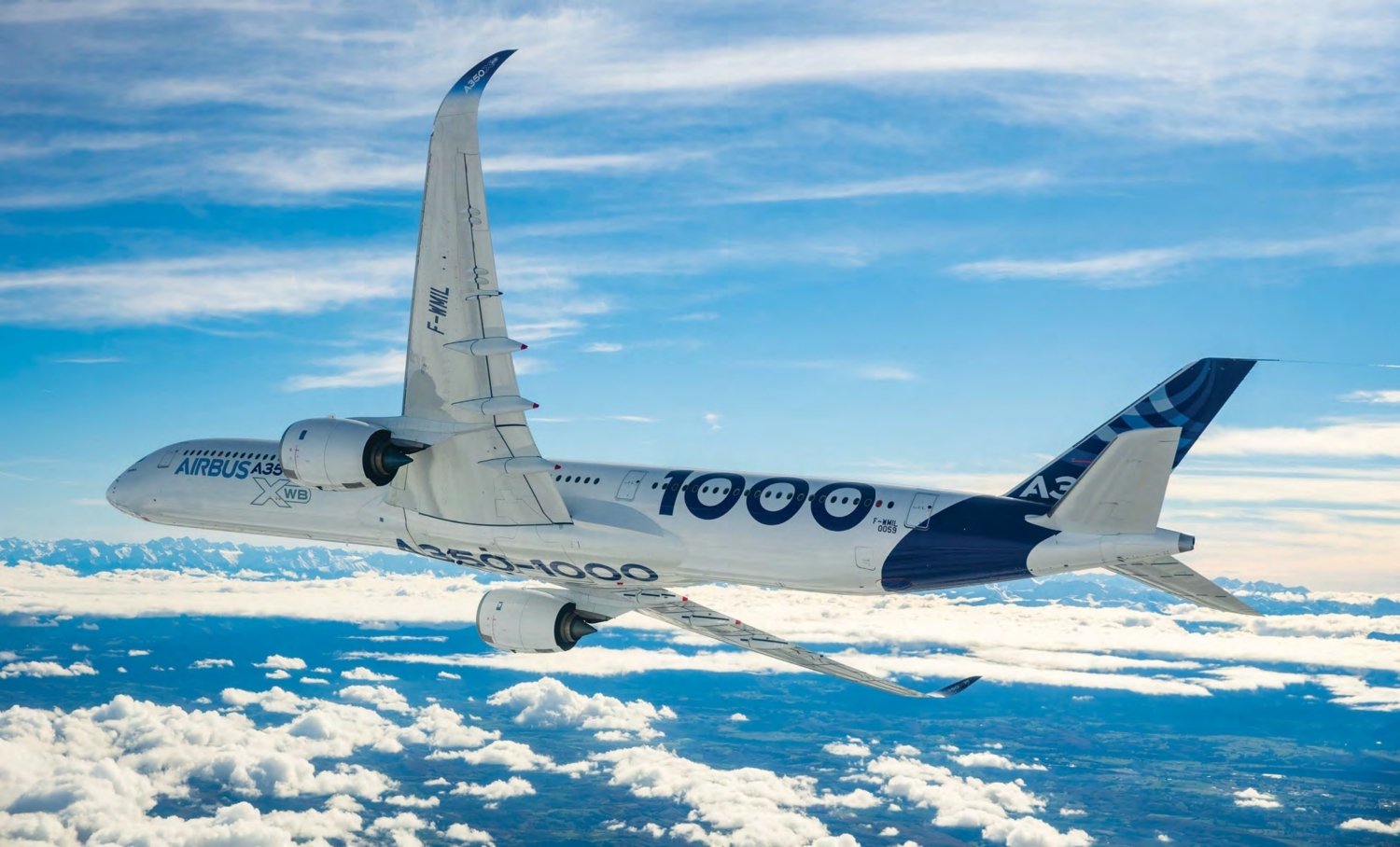 The first A350-1000, F-WMIL (msn 59) peels away from the Falcon 20 chase aircraft over southwest France during its November 24 first flight.
S Ramadier/Airbus

Three-and-a-half years after the A350-900 first flew and nearly two years after that aircraft entered service with Qatar Airways, the second A350 XWB variant – the larger A350-1000 – completed its first flight on November 24 from Toulouse- Blagnac. The flight was in line with Airbus’s schedule, which called for the jet to fly in the fourth quarter of 2016.

The maiden flight saw F-WMIL flown to 10,000ft (3,048m), where the basic configurations of the aircraft were checked. Christophe Cail, Airbus’s Chief Test Pilot, told a news conference in Toulouse while the first flight was in progress that the aircraft was decelerated to a speed of 145kts (268km/h) and accelerated to 206kts (381km/h).

Cail said that the crew reported the aircraft was “very comfortable, [with] no vibration” in this initial handling. The landing gear was raised and lowered and the flight control system checked. Again, the flight crew reported that everything was normal.

The A350-1000 was then flown to 25,000ft (7,620m) for further systems tests and exploration of the flight envelope. Cail said the aircraft was taken to its maximum Mach number (Mach 0.89). Descending again, the gear and flaps were extended. Following a flypast at Toulouse-Blagnac for assembled dignitaries and Airbus staff, the aircraft landed after a four-hour, 18-minute flight.

Airbus’s target is to have the A350-1000 certified and the first customer aircraft (msn 88, registration to be announced) delivered to launch operator Qatar Airways in the second half of 2017.

The bigger, longer range A350-1000 is now in flight testing. Mark Broadbent reports

This second A350 XWB variant has several differences from the A350-900, including increased maximum take-off weight, higher-thrust engines and a new landing gear (see panel). Cail said “intensive tests” are therefore required. A350-1000 certification testing will last for 1,600 flight hours, with two other prototypes set to join F-WMIL in the test programme.

The first flight followed systems tests in the lab, which assessed the flight control system, the electrical system, the landing gear and ground vibration. Aircraft Zero, the full-size A350 test bench in Toulouse, tested systems integration. The full flight simulator was used by the test flight crew to rehearse the first flight. Aircraft and flight test installation power-on and engine runs on F-WMIL took place before low-speed and high-speed rejected take-offs.

The process of de-risking the A350- 1000’s first flight was also supported by the fact that the aircraft’s Rolls-Royce Trent XWB-97 engine – a higher-thrust version of the A350-900’s Trent XWB-84 – had already been in flight-testing for a year. Airbus’ in-house A380 Flying Test Bed (F-WWOW, msn 1) has been flying with a Trent XWB-97 on its inner left engine pylon since November 2015. A first test campaign to April 2016 lasting 148 hours has been followed by a second, 157-flyinghour, campaign that began in July and is due to conclude by the end of 2016.

Airbus says A350-1000 certification will benefit from all this testing having occurred before first flight, and because the A350-1000 is a variant of an aircraft already certified and in service (49 A350- 900s had been delivered at the time of the first flight). Cail said: “The high level of maturity we have reached on the A350- 900 and what we have done in terms of certification for the systems [means] we have been able to reduce the flight test campaign to less than a year.” 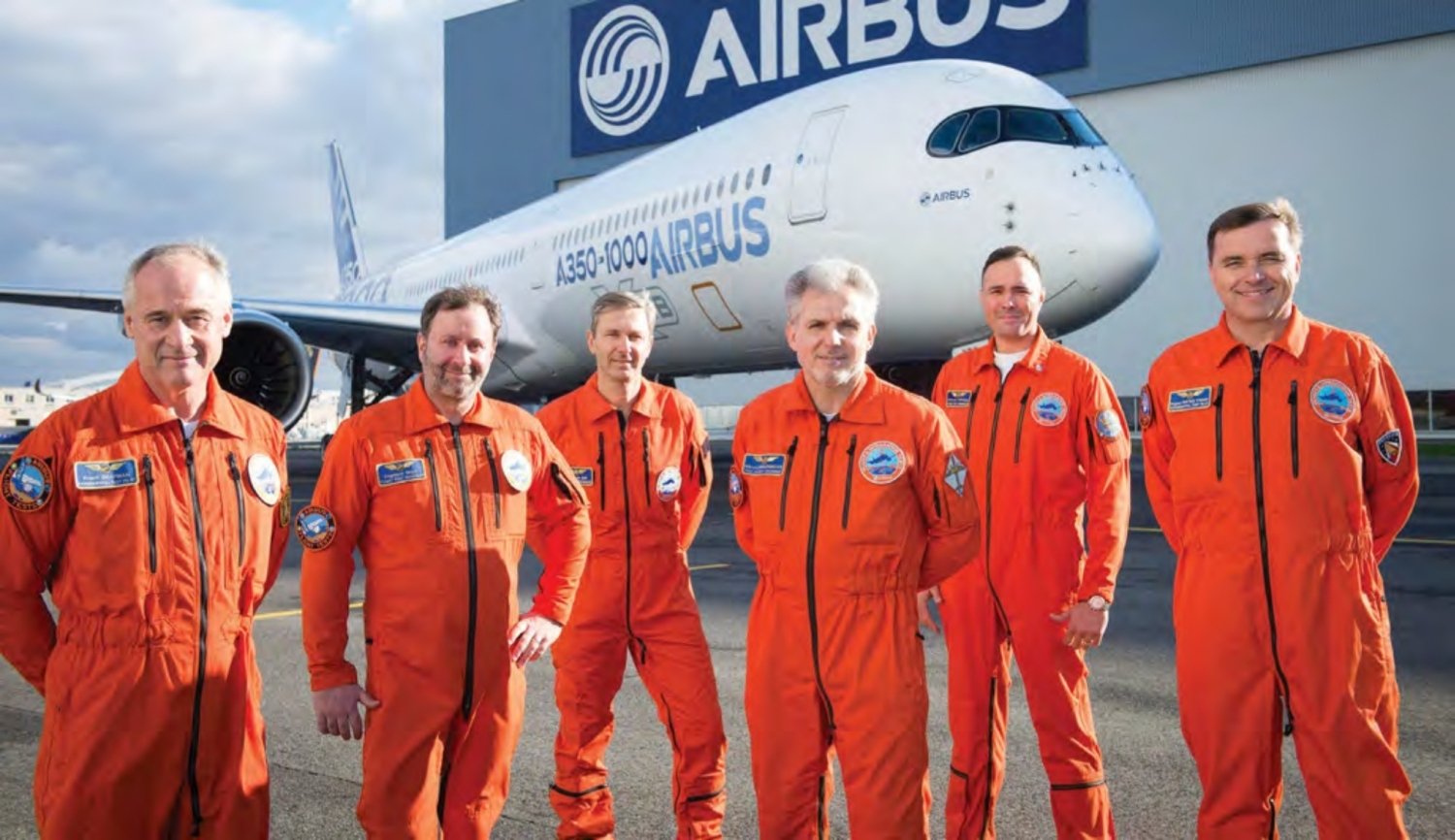 F-WMIL is the first of three A350-1000 prototypes, and being used to explore the flight envelope and for some systems and engine trials.
S Ramadier/Airbus

Cail’s presentation explained that 15 video cameras mounted on the aircraft give the flight test engineers at the FTI station behind F-WMIL’s cockpit dedicated external views of the flaps, slats, landing gear and engines. The FTI station also has eight copies of the cockpit displays, allowing the engineers to see exactly what the flight crew sees.

This enables the flight test engineers to undertake real-time monitoring on dedicated configurable screens. Engineers can view information on test parameters that the pilots cannot see and access. 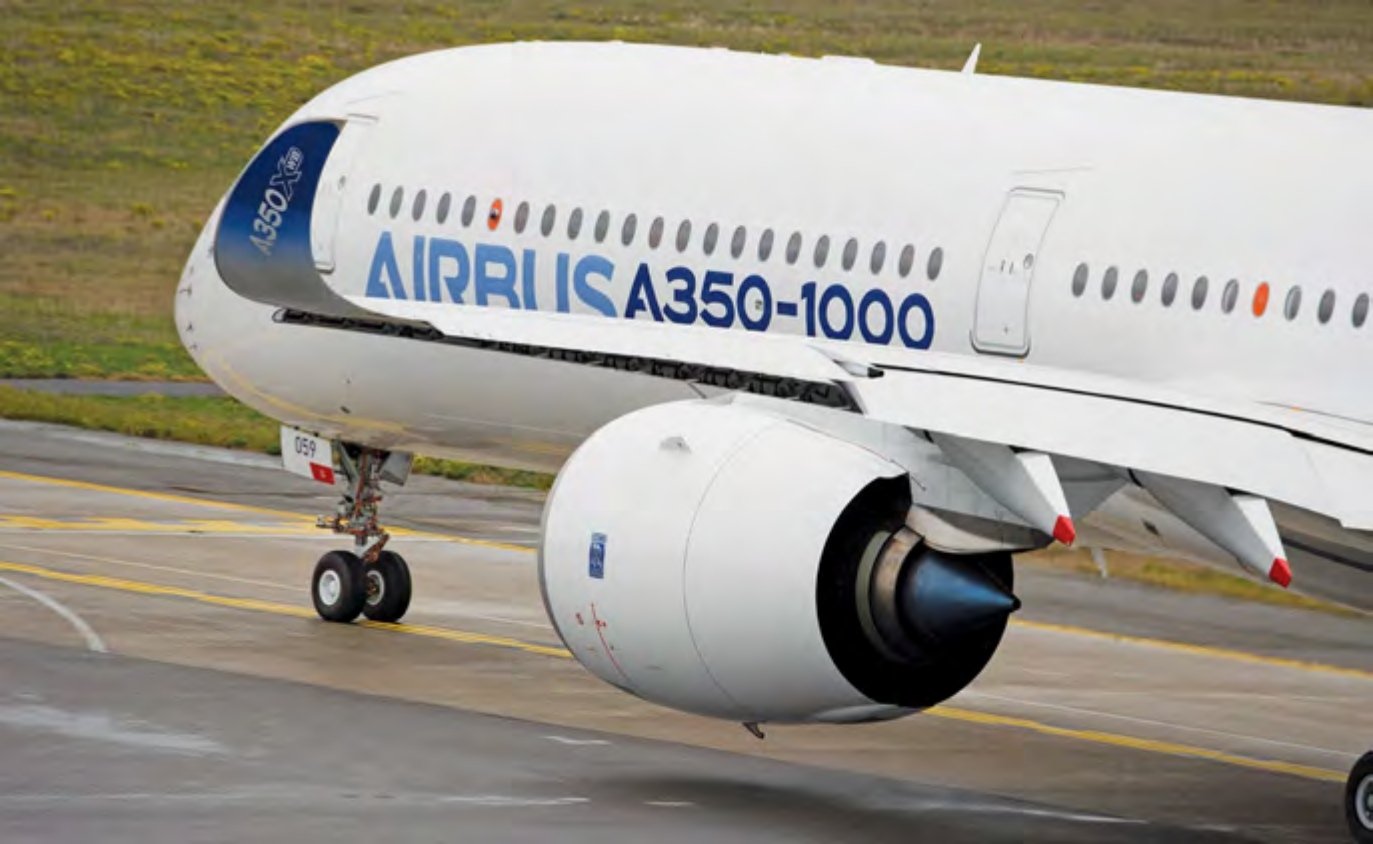 There are no fewer than 150 specific display pages available to the engineers that focus on systems or specific flight phases. Flight test engineers can even modify the aircraft’s configuration using up to 60 special control push buttons.

During the first flight, real-time analysis and systems monitoring was provided by 100 specialists on the ground via telemetry. Airbus has five telemetry rooms – two in Toulouse and one each in Bremen, Hamburg and Filton. The data flow from the aircraft to the ground is an average of 100Mbps per second.

Cail’s presentation said the flight test installation on F-WMIL measures more than 600,000 parameters. No fewer than 3,300 measurements are taken using 220 different types of sensors. There are 120,000 electrical connections, 140 remote acquisition units and no less than 120km (75 miles) of orange wire – that is, wiring supporting the test instrumentation – aboard the aircraft.

F-WMIL also has ballast tanks that can transfer 10 tonnes (22,000lb) of liquid (water and glycol) from the forward to the aft cargo holds in four minutes, which will enable the test teams to vary the aircraft’s centre of gravity.

Joining F-WMIL in the certification testing will be two other A350-1000s, F-WWXL (msn 71) and F-WXLV (msn 65). F-WWXL will be the second aircraft to join the programme – Cail said its first flight was due within a few weeks of F-WMIL flying.

Each of the three aircraft has its own responsibilities. F-WMIL is being used to explore the flight envelope and for some systems and engine trials. F-WWXL is tasked with performance evaluation, which encompasses high-altitude, hot-weather and cold-weather trials and braking tests.

It will also conduct other engine, systems and autopilot testing to complement the work done using the first aircraft.

F-WXLV will be third to fly. This aircraft rolled out of the paint shop in September with the ‘carbon’ livery that was also applied to one of the A350-900 test aircraft. It will be equipped with a light flight test installation and will be used for cabin development and certification, external noise testing, route proving (including early long-range flights) and ETOPS (extendedrange twin-engine operations) approval.

Cail’s presentation showed that of the 1,600 flight test hours required for certification, 600 hours will be completed by F-WMIL and 500 hours each by the other two jets.

The A350-1000 is significant for Airbus because it is designed to compete with the Boeing 777-300ER, which in the last decade has become the aircraft of choice in the twin-aisle, twin-jet airliner marketand with over 800 sold, according to official Boeing figures. A presentation by Senior Vice President Marketing, François Caudron, claimed the A350- 1000 will be 20,000kg (44,092lb) lighter, have 450 nautical miles (833km) more range and be 25% more fuel efficient than the 777-300ER.

With the A350-1000 having entered flight testing and its service entry due within a year, and with production of the 777-9 set to begin during 2017, the battle lines between Airbus and Boeing for the future of the twin-aisle airliner market are moving into sharper focus.

Other differences in the A350-1000 are a reinforced nose landing gear, a six-wheel bogie for the main landing gear and a new frame support structure to cater for the extra payload. The wing is the same 64.75m (212ft 5in) span as the A350-900, but there is an extended trailing edge flap. 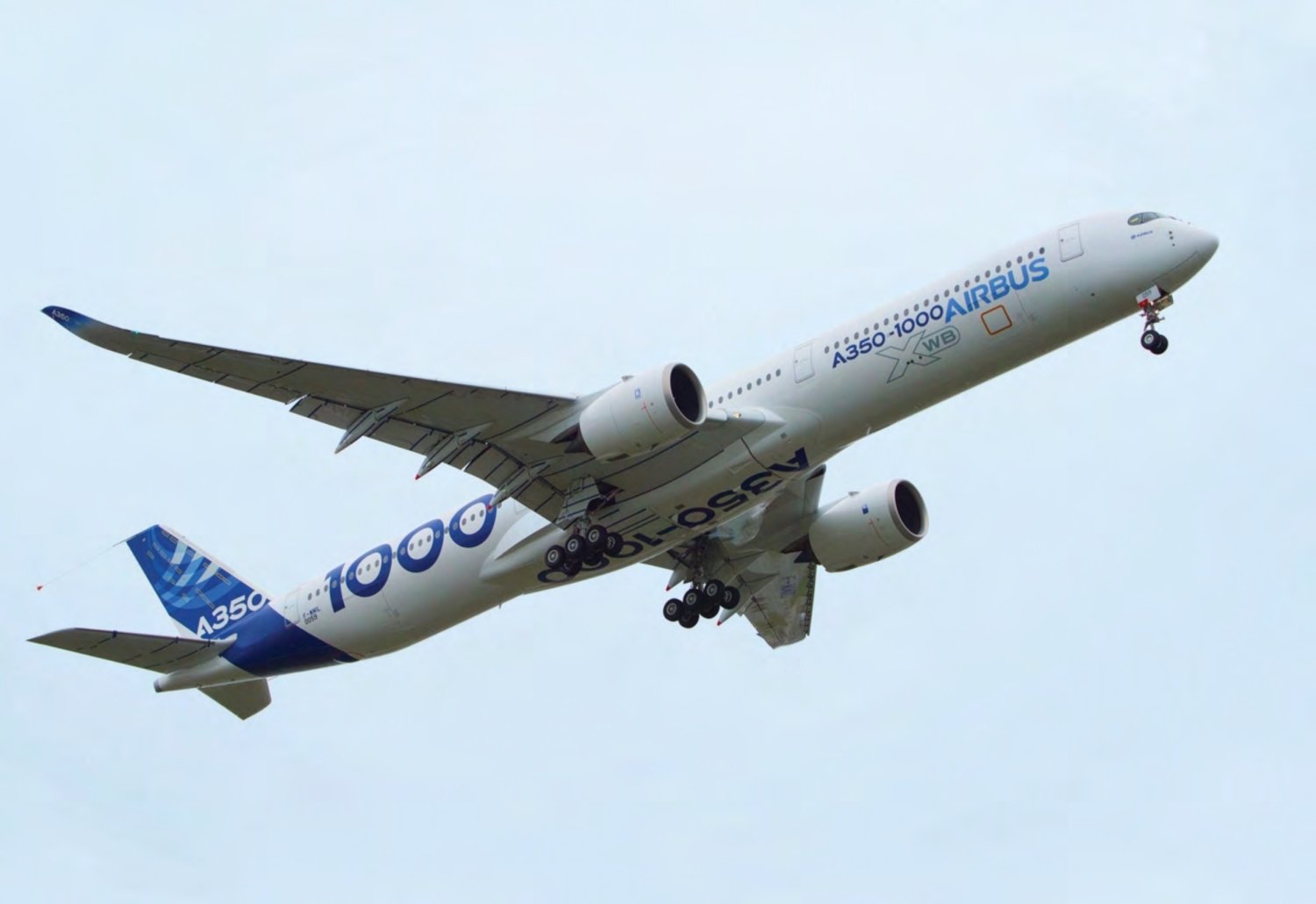 The first A350-1000 test flight lasted four hours and 18 minutes.
A Doumenjou/Airbus