Airbus is proposing several upgrades for the A380. Mark Broadbent outlines the latest development study for the European super jumbo

Airbus used the recent 52nd International Paris Air Show at Le Bourget to announce a development study looking at a range of potential product enhancements for its flagship A380, packaged under

The most notable element of the study is the addition of large winglets. During the Le Bourget week, A380 test aircraft F-WWDD (msn 4) – now a permanent static exhibit at the Musée de l’Air on the airfield – was displayed with mock-up winglets featuring a 3.5m (11ft 4in) uplet and a 1.2m (3ft 9in) downlet. Airbus says the winglets, together with other, as yet unspecified changes to the wing configuration to reduce drag, should provide a fuel burn saving of 4%.

It is also proposed to extend maintenance check intervals, reduce downtime at the aircraft’s six-year check and improve systems to reduce maintenance costs.

This is further evidence of the trend in the commercial aircraft market to maximise seat counts, which is driving manufacturers to offer aircraft with more seats (as per Boeing launching the 737 MAX 10, see p22-23) and airlines to reconfigure inservice aircraft with higher capacity. More seats maximises load factors, which cuts seat-mile costs and (if an airline can fill the aircraft) raises revenues.

The cabin enablers comprise several internal modifications. Relocating the forward stairs that connect the main deck and upper deck from Door 1 to Door 2 would create room for 20 more passengers. Installing a new aft galley stair module with a straight/square (rather than spiral) staircase at the rear of the cabin would make room for 14 more main deck seats. 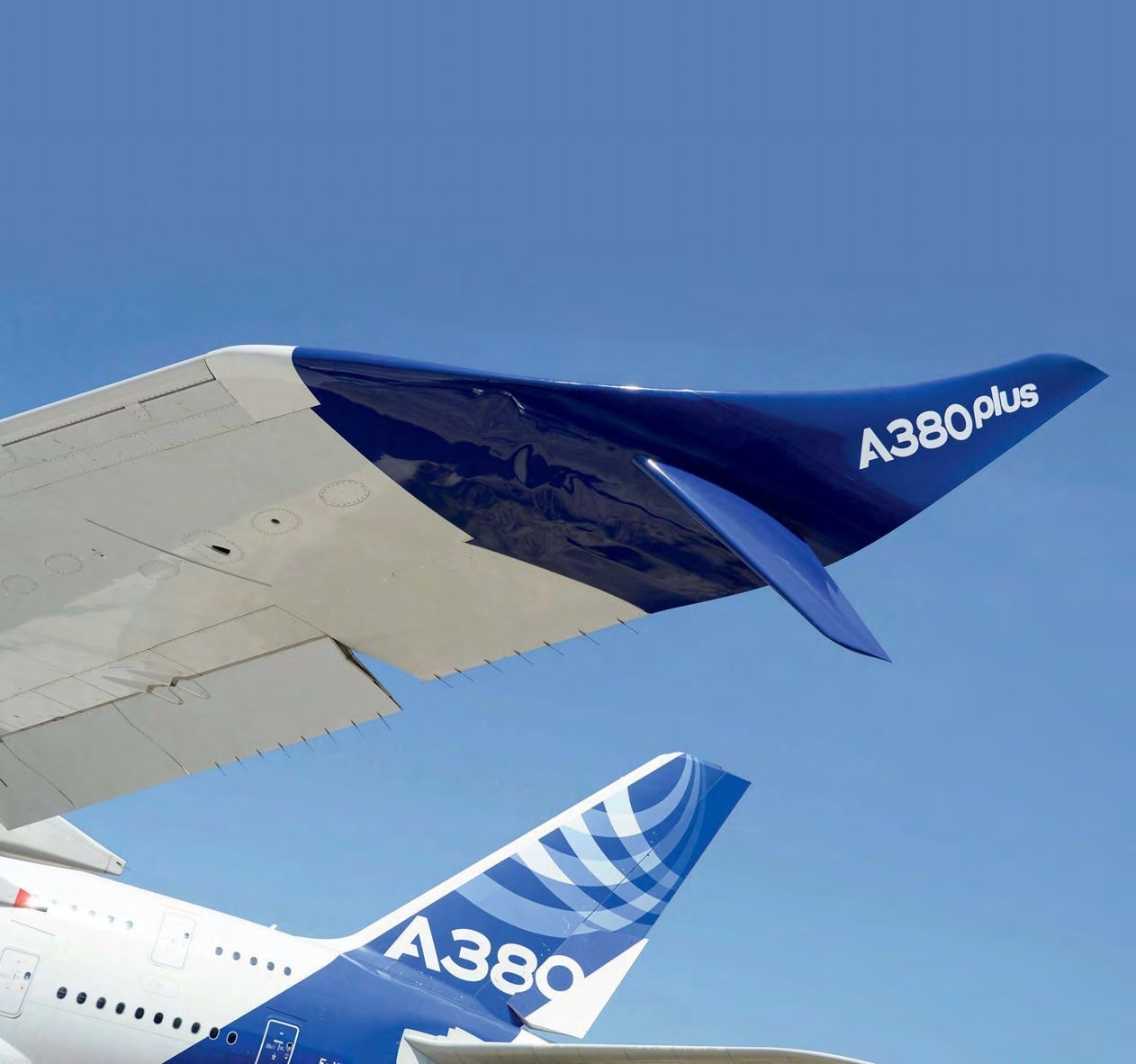 The A380 test aircraft F-WWDD (msn 4), now a permanent static exhibit at the Musée de l’Air at Le Bourget, was displayed with mock-up winglets during the Paris week to highlight the A380plus studies.
All photos P Pigeyre/Airbus unless stated 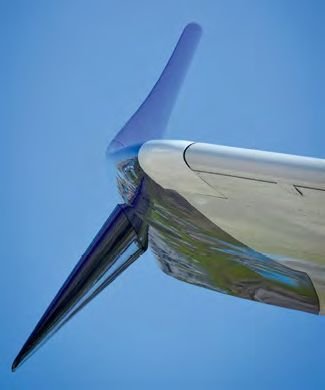 Airbus says the winglets, featuring a 3.5m (11ft 4in) uplet and a 1.2m (3ft 9in) downlet, together with wing configuration changes to reduce drag should provide a fuel burn saving of 4%. 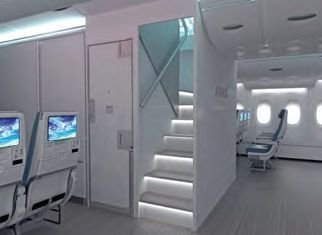 New forward stairs are among several proposed changes to the cabin that would raise the A380’s four-class capacity to 575 seats.
Airbus

Space for ten more business class seats on the upper deck would be created by removing sidewall stowage. Lastly, a new economy class arrangement would create 23 more seats on the main deck.

Airbus will, of course, hope the A380plus concept leads to greater interest in the super jumbo. It’s now nearly 17 years since the A380’s launch, but since then Airbus has sold just 318 examples. More than a third of these aircraft, 140, have been sold to just one customer, Emirates, for which the A380 has helped turn the Dubai-based airline into a huge global force. Emirates had 95 A380s in service by early July, more than any other airline by some distance (Singapore Airlines is next with 19), and it is due to receive its 100th A380 in the autumn.

Clark added a caveat that he’d want to introduce the A380plus enhancements as retrofits to aircraft already in service, but Airbus says the changes would only be available as line-fits on new-build aircraft and not as retrofits. Clark said: “If it’s going to cost me $10 million a pop [to retrofit] we probably wouldn’t do it.”

This doesn’t necessarily mean Emirates wouldn’t be interested in the A380plus. Even after its 100th example is delivered the Gulf airline will still have 40 A380 orders and it is conceivable later aircraft in the backlog could be configured with the A380plus package. Clark said: “The back 25 [aircraft] could easily be adapted.”

Beyond the announcements at Le Bourget, there is a wider issue with the A380: reengining. Clark has repeatedly stated how Emirates would like Airbus to bring out an A380neo (new engine option). In response, Airbus executives have repeatedly said there’s no business case for such a project.

A key reason for this view is that new, more efficient turbofan engines that could make an A380neo viable won’t become available until the 2020s.

One interpretation of the A380plus could be that the aerodynamic and configuration changes it would introduce might lay the groundwork for any future step to produce an A380neo.

However, industry analyst Richard Aboulafia of the Teal Group isn’t so sure. Here’s his opinion, expressed to AIR International: “Airbus is obligated to do what it can, within reason, to save the A380. It is not obligated to throw away the $1–2 billion needed to re-engine the type; it is merely obligated, by customers and suppliers, to spend the minimum necessary to show that they are still supporting this aircraft in the market. The A380plus is exactly that: a cheap and cheerful way of showing they are keeping the faith.”

The fact that A380 sales have become rare events – there have been none since All Nippon Airways ordered three early in 2016, and before that the last big commitment was Emirates’ most recent repeat order (for 50 jets) in November 2014 – has led to questions about the A380’s long-term future.

The A380 is well suited to markets with plentiful passenger demand (for instance, some routes between major hub airports), and Airbus remains steadfast in its view that rising air travel demand will cause congestion and lead to demand for more high-capacity airliners like the A380. However, widebody aircraft purchases continue to be, as they have been for years, largely focused on the efficient twinjets such as the A350 XWB and the 777.

Aboulafia’s opinion on the latest developments in the A380 programme is blunt: “The A380plus is basically prefuneral window-dressing.” 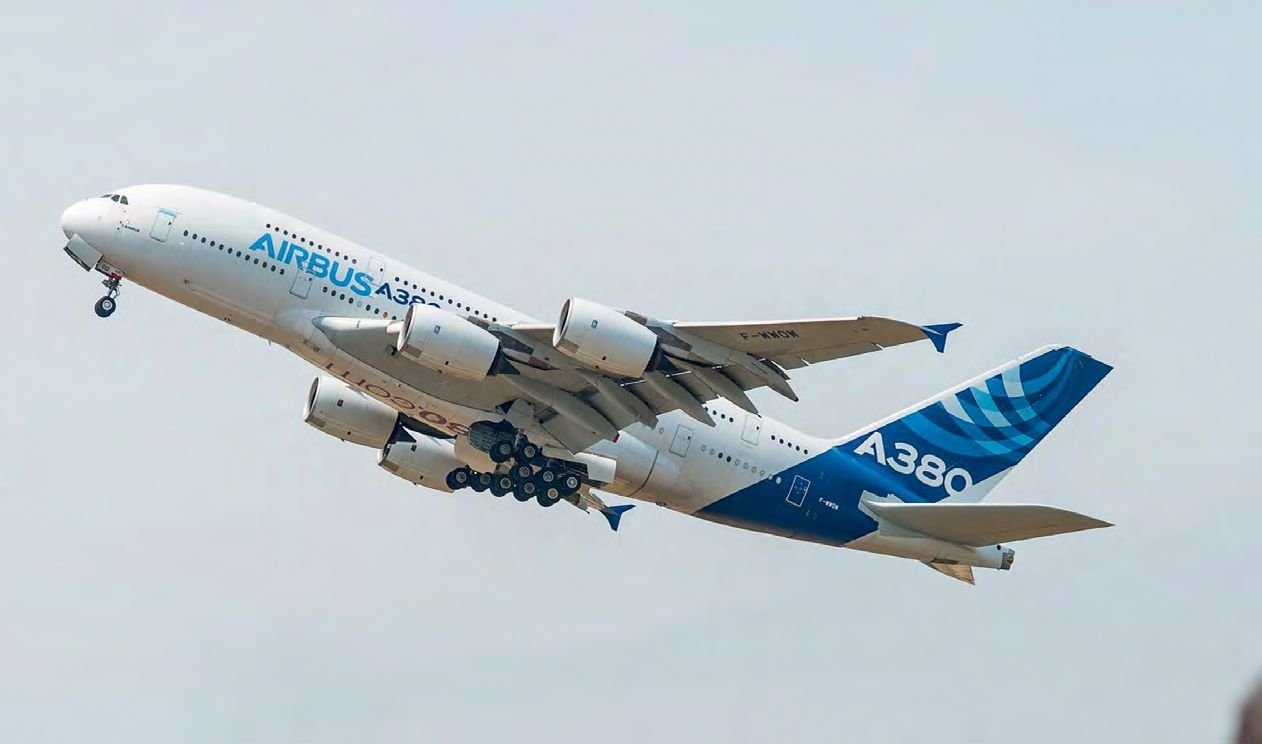 Nearly 17 years after its launch and more than 12 since its first flight the A380 still draws attention – but only 318 have been sold.
F Lancelot/Airbus