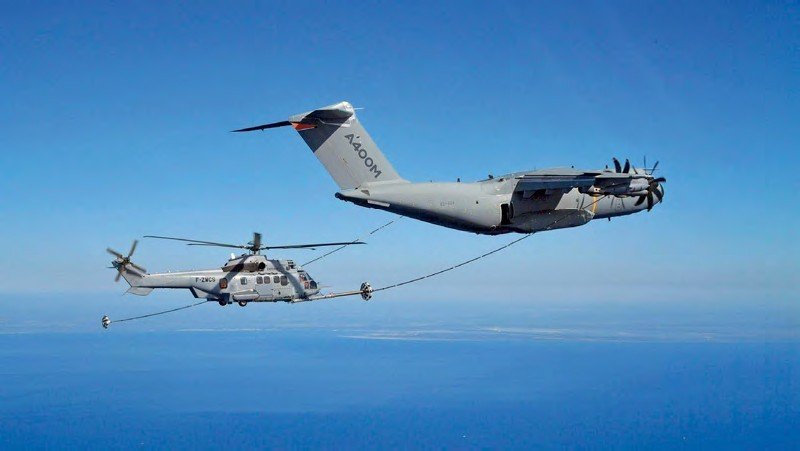 An A400M test aircraft, EC-404, in formation with Airbus H225M F-ZWCS over southern France. The trials proved the suitability of the A400M to refuel helicopters in flight from the wing-mounted pods, a procedure that had previously been problematical because of turbulence. Airbus

An Airbus A400M test aircraft has successfully achieved its first helicopter aerial refuelling contacts with an H225M helicopter, Airbus said in September. Over the course of four daytime flights over the south of France, the A400M performed 51 dry contacts marking a decisive milestone towards its full capability as a tanker. The tests were performed under the coordination of the Direction générale de l’armement essais en vol (DGA EV flight test centre formerly known as the CEV). No fuel was passed during the tests which were performed between 1,000ft and 10,000ft at flight speeds as low as 105kias.

The trials continued on from work done at the beginning of the year to confirm the viability of flying the helicopter so close to the tanker. The next step in the flight test programme, scheduled to take place later in 2019, will involve fuel being passed from the tanker. Final certification of the procedure is expected in 2021.

The flight test campaign also included the first proximity trials between the A400M and an H160 medium utility helicopter. The trials, which were concluded successfully, were requested by the French Direction Générale de l’Armement (Directorate General of Armament) as part of a feasibility study for the Guépard future multirole helicopter for France’s armed forces.

Aerial refuelling of helicopters has proved problematical for the A400M and the latest development marks a significant step forward for the type.

The A400M is certified to be quickly configured as a tanker capable of carrying up to 50.8 tonnes (111,600lb) of fuel in its wings and centre wing box, without impinging on the cargo hold area. Two additional fuel tanks can be installed in the cargo hold, providing an additional 5.7 tonnes (11,400lb) of fuel each. The fuel carried in the extra tanks can be of a different nature to the fuel in the main tanks, enabling the A400M to cater for the needs of different types of receiver aircraft.

The A400M is already cleared to refuel fighters including Eurofighter, Rafale, Tornado and F/A-18 and is also able to refuel other large aircraft such as another A400M, C295 or C-130.

In another important landmark for the type, in early October an A400M demonstrated its ability to drop 80 fully equipped parachutists, 40 from each side of the aircraft, in a single continuous stream.

The tests were performed in coordination with the DGA together with French and Belgian Armed Forces.

The flight test campaign, comprising nine flights and 564 paratrooper jumps, was performed in the Ger Azet drop zone in southern France during daylight. It successfully completed flight test certification to support the deployment of 58 paratroopers from one side door, the A400M’s maximum dispatch capacity from a single door.

These major milestones conclude the certification test phase of the paratroop dispatch capability of the A400M, pending on the completion of certification activities in the first half of 2020, and paving the way for the simultaneous deployment of up to 116 paratroopers and certification for mixed operations.

The ability to drop parachutists in significant numbers has dogged the A400M programme for years. The exit doors to the side of the aircraft have been redesigned with airflow deflectors to prevent injury to soldiers on exiting the aircraft.