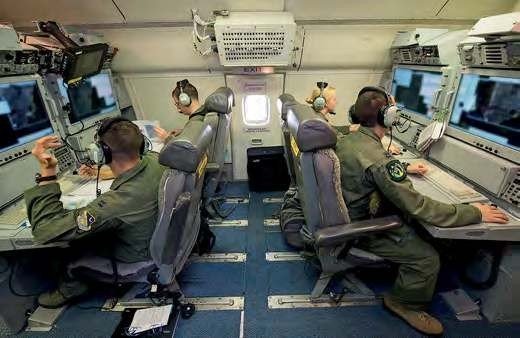 The battle management function of today’s E-8C JSTARS will, as part of the ABMS system, be shifted to wherever it needs to be, usually terrestrial command and control facilities.
US Air Force Materiel Command

The Advanced Battle Management System (AMBS) is what the Air Force now wants in place of E-8C JSTARS Recapitalization. It is not a ‘big wing’ intelligence, surveillance and reconnaissance aircraft like the JSTARS. ABMS will be a networked system replacing the two functions that JSTARS combined on board the E-8C: airborne battle management, and detecting and tracking terrestrial targets using ground moving target indicator (GMTI) radar. The battle management function will migrate from the E-8C to other command and control nodes, predominantly terrestrial, but also, when the situation requires, a manned aircraft. The GMTI function will migrate, at least initially, to airborne platforms, primarily (but not exclusively) Northrop Grumman RQ-4C Block 40 Global Hawk UAVs.

The Air Force has yet to define fully the ABMS, and is planning to spend $2.7 billion on it over the next five years; the ffirst of its three increments will run to 2023. ABMS is planned to achieve initial operational capability in 2035, over 10 years later than had been planned for the JSTARS Recapitalization. ABMS’ full operational capability is scheduled for 2042.

An ABMS analysis of alternatives study is currently in progress, looking at alternative architectures and technologies. This is likely to run until 2019, with decisions about the ABMS architecture taking place in 2020. The Air Force currently sees the ABMS as also being capable of replacing the battle management function of its Block 40/45 E-3G Sentry airborne warning and control system as well, although how it would replace its sensor function has yet to be defined.

Concerned about the delay in relying on ABMS to replace JSTARS, as well as the impact of JSTARS retirement on its home base at Warner Robins Air Force Base, Georgia, Congress has added language to the National Defense Authorization Act (NDAA) that is intended to keep the current E-8C force operational. It added additional funding and language to the NDAA blocking the Air Force from reducing the current 16 aircraft to 13 in FY2019, as had been planned, using the three least reliable E-8Cs for parts. Congress also added $30 million for improved GMTI radar development and $15 million for E-8C upgrades. It wants a report on the potential for reviving the programme to re-engine the E-8C fleet, authorised in 2007 but never started (engines for the ffirst three aircraft reportedly remain in storage).

The Department of Defense will have to certify that the US Air Force is “taking all reasonable steps” to keep the E-8C JSTARS fleet operational and that it would keep at least six aircraft available for operational deployment until they are retired.

To stay informed about ABMS, Congress required briefings from the US Air Force and a study by the Government Accountability Office. David C Isby