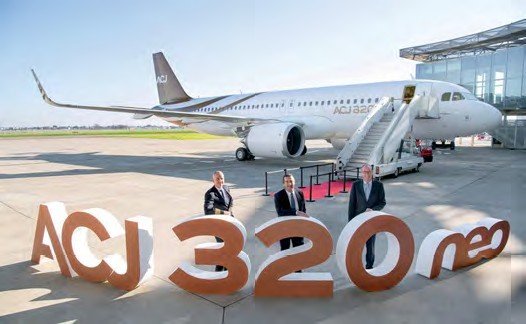 The aircraft is now in Basle, Switzerland, where it is being fitted with a VVIP interior designed by Alberto Pinto. Although delivered in Airbus Corporate Jets’ house colours the aircraft will be repainted in Acropolis Aviation’s livery during its lay-up in Basle.

The aircraft, registered D-AVVL (msn 8403), had made its maiden flight from Airbus’ production facility in Hamburg on November 16, 2018. It will reportedly be re-registered G-KELT in service with Acropolis Aviation.

ACJ President Benoit Defforge said: “Delivery of the first ACJ320neo is the latest milestone in the roll-out of a completely new ACJ family.” The ACJneo is derived from the commercial A320neo family, 600 of which are already in service with airlines around the world. The corporate family consists of the ACJ319neo and larger ACJ320neo.