Seven Österreichische Luftstreitkräfte (Austrian Air Force) Eurofighter Typhoons, deployed to Wittmund Air Base, Germany, home of Taktisches Luftwaffengeschwader 71 (TaktLwG 71 or 71st Wing) ‘Richthofen’ at the end of April for the first ever air-to-air gunnery training since the Eurofighter, entered service at Zeltweg. The detachment was also the first ever opportunity for the Österreichische Luftstreitkräfte to train with Discovery Air Defence Services (DA Defence) based at Wittmund. The training qualified Austrian Eurofighter pilots in the use of air-to-air weapons and tactics under the command of Colonel Doro Kowatsch.

The Österreichische Luftstreitkräfte’s objectives for the Wittmund detachment were to increase the level of cooperation with the Luftwaffe, exchange experience of operating the Eurofighter, to maintain basic shooting skills with the 27mm BK27 Mauser cannon against moving targets, and fly air-to-air training flights with and against German Eurofighter pilots assigned to TaktLwG 71 ‘Richthofen’.

Safety mandates prevent the Österreichische Luftstreitkräfte from conducting air-to-air gunnery in Austria, so the chance to do so, combined with the air-to-air training also undertaken from Wittmund, allowed pilots to maintain proficiency and their operational qualifications. Austria’s Eurofighters are tasked with defending the nation’s airspace and to maintain its sovereignty under a role dubbed airspace surveillance. Both aspects of the role could require use of the aircraft’s cannon. Major Friess, a Eurofighter pilot assigned to the Überwachungsgeschwader (Surveillance Wing) based at Zeltweg Air Base, explained how safe handling of the Eurofighter weapon system in daily operations is one of the key factors of efficient airspace surveillance.

During the Wittmund detachment, Austrian pilots conducted air-to-air gunnery against McDonnell Douglas A-4N Skyhawks operated by DA Defence Services and flew intercepts, including some supersonic, against Luftwaffe Eurofighters flown by pilots assigned to the two resident squadrons in TaktLwG 71.

It’s unusual for AIR International to publish details of a winch, but air-to-air gunnery requires a towed target that in turns requires a winch. In the towed target business, no surprise, then, that Discovery Air’s A-4Ns are equipped with a QinetiQ Targeting Systems RM-30A1 tow winch and fitted with a ram air turbine power unit.

According to QinetiQ’s specification, the RM-30AI operates exclusively on electrical power with reeling speeds between 1,600 and 2,000ft (485 to 610m) per minute and has a spool that can hold up to 9,754m (32,000ft) of tow line, depending on the target configuration, mission safety requirements and the size of the tow line. In operation, the tow line is extended on the winch 457m (1,500ft) behind the A-4N. 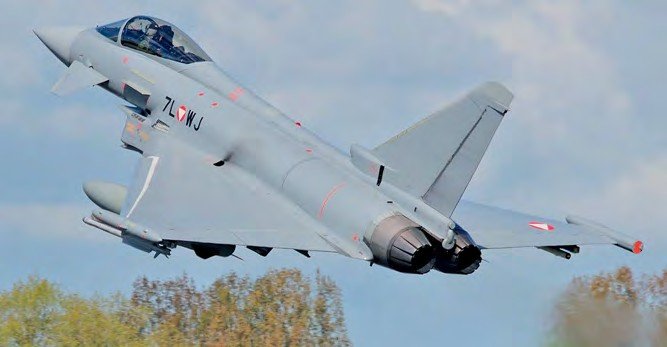 Explaining the process, one of Discovery Air’s pilots said the pilot uses two displays, one for control (with selectable digital display of the tow line’s length and tension) and one for telemetry of the target. Hits are displayed to the A-4 pilot, and are given to the pilot shooting at the target over the radio. On occasions when the Eurofighter’s BK27 failed and when shooting is complete, the tow line is automatically reeled in, a process the pilot can watch on a display fed by the RM-30A1’s camera.

During the firing sequence, the target can become unstable, at which point firing is halted and the target is cut loose. For environmental protection reasons, each tow line comprises ropes made of sisal, which dissolves in salt water. 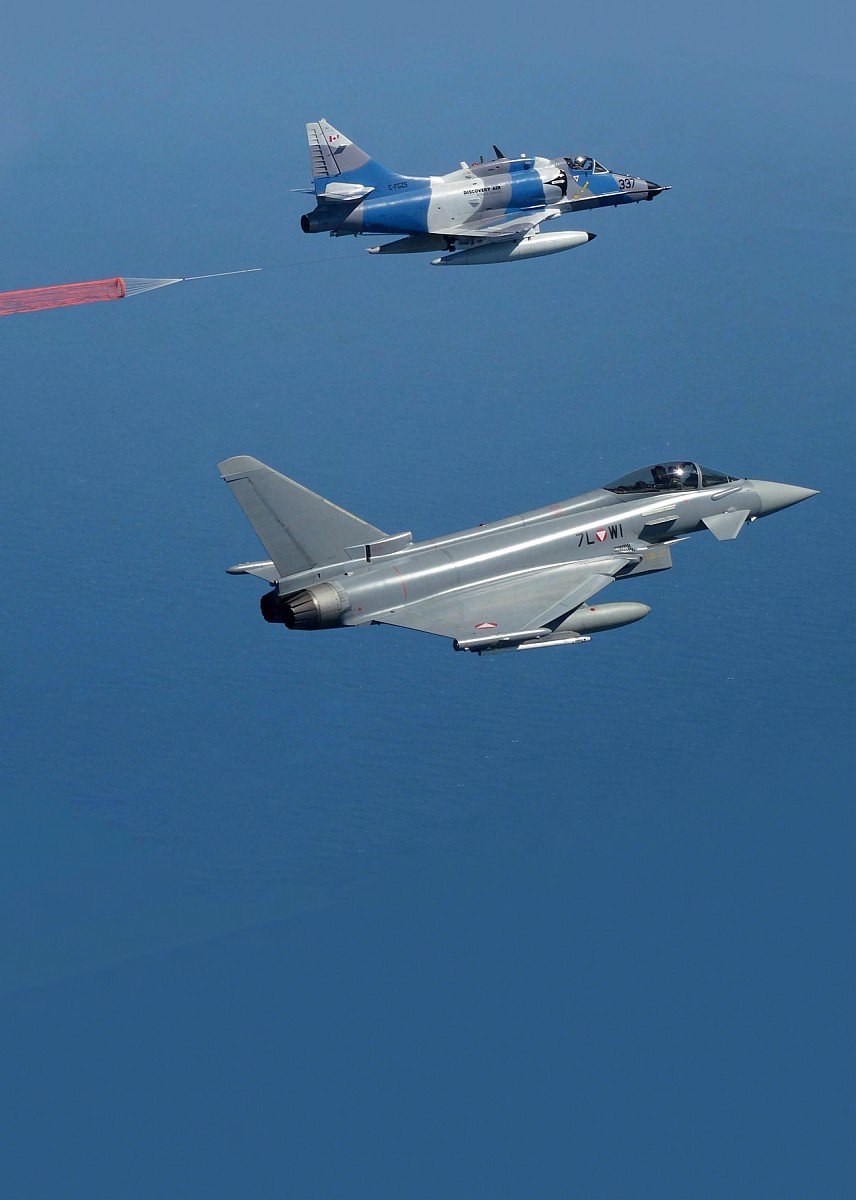 All Österreichische Luftstreitkräfte Eurofighters are assigned to the Überwachungsgeschwader based at Zeltweg Air Base. The seven jets deployed to Wittmund were supported by 130 military personnel and 60 tonnes (132,000lb) of equipment either airlifted to Wittmund on C-130Ks assigned to the Lufttransportstaffel based at Linz or trucked in by road.

The Austrians made intensive use of the gunnery ranges over the German sector of the North Sea and flew two waves per day. Each pilot had to qualify by shooting 150 rounds from the 27mm BK27 Mauser cannon at a target towed by an A-4N Skyhawk in controlled airspace above the North Sea. Fourteen pilots amassed nearly 60 hours of gunnery training.

Planning for the Austrian gunnery shoot lasted almost a year. This year’s edition was the second. The first took place at Decimomannu Air Base, Sardinia in 2014. Staged between April 27 and May 15, at which pilots were rotated through the Wittmund detachment so the entire cadre could qualify. All seven aircraft made the 80-minute hop back to Zeltweg on May 15.

Österreichische Luftstreitkräfte Eurofighter 7L-WO parked on the ramp outside a hardened aircraft shelter at Wittmund Air Base.
Michael Balter