Following the release of the Eurocopter EC135 for Aerofly FS 2, we asked IPACS CEO Dr Torsten Hans to give us an insight into this exciting project.

IPACS added the first helicopter to its Aerofly FS 2 flight simulator in November 2018: the highly popular Robinson R22 Beta II. It was well received by the community and realworld pilots dubbed it ‘the best helicopter in any sim out there’. The R22 was excellent for practising helicopter flying skills and with the offered assistance it was also very enjoyable for beginners and notably with a Virtual Reality (VR) headset. However, the one thing the R22 didn’t offer was a fast cruising speed. The community asked for a larger and more powerful helicopter that could fly faster and higher than the small but nimble R22.'

Enter the Eurocopter EC135. IPACS first announced this twin-turboshaft helicopter for Aerofly FS 2 in July 2020 -boasting many advanced features and the ability to start from a cold and dark state. This meant that Aerofly FS 2 would finally get a second helicopter which would be a step up in terms of complexity and the operating range of rotorcraft in the simulator. The real EC135 is a world-famous helicopter that plays a huge role in emergency medical operations, law enforcement, as well as being used for transporting VIPs and connecting remote areas. If you live in a large city, the chances are high that you have seen the EC135 with its ducted tail rotor design, called Fenestron and heard its characteristic sound.

A public beta version of IPACS’ EC135 became available in October and was followed shortly after by the official release. Commenting on the helicopter’s systems and flight model, Torsten explained that Aerofly FS 2 has a unique physics engine that models the airframe as individual rigid body objects, which are held together with simulated attachment points called ‘joints’. The entire airframe is therefore flexible and physical laws dictate the movement of each part. This includes, for example, inertia due to mass distribution; displacement or bending caused by wing or rotor forces and also gyroscopic effects on propellers and rotors, all of which are modelled in the simulation. 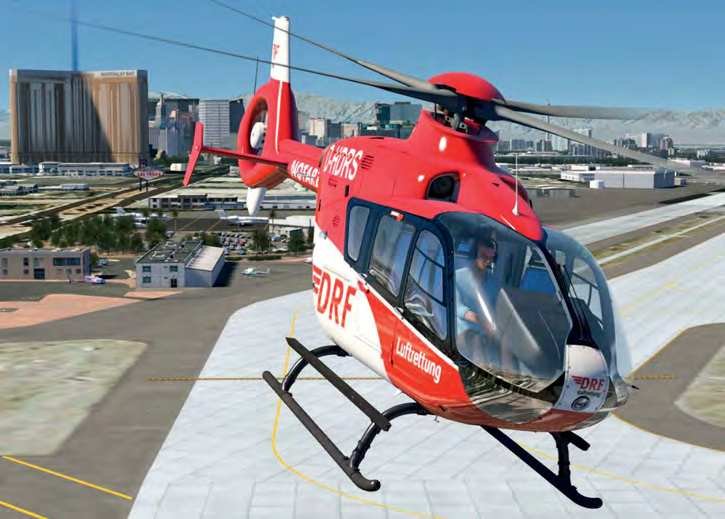 For the rotor physics, Aerofly FS 2 computes the forces on each blade at multiple stations over 1,000 times a second. The forces generated bend and twist the rotor blade and the loads are transferred to the rotor head, which in turn distributes them to the fuselage. Each rotor blade creates a downwash which affects the flow field around the helicopter and the inflow of other blades. Physical effects such as dissymmetry of lift, vortex ring state and ground effect all occur naturally within the simulation and are the result of this complex system of interactive components.

Real-world performance sheets were used to fine-tune physical parameters such as the blade airfoils and flaps as well as drag, and the twist and blade stiffness of the hingeless rotor head.

The twin turboshaft engines that drive the rotor system through the gearbox are a complex simulation that computes a realtime thermodynamic model for each engine component like the compressor, combustion chamber and turbines. The engine fuel flow is modulated by a simulated Full Authority Digital Engine Controller (FADEC) to keep the rotor at a constant speed. Engine speeds and temperature measurements seen on the displays and by the FADEC computer even have simulated sensor delays. Torsten said that the engine parameters were tuned to match real-world performance and behaviour from datasheets as well as using real-world cockpit recordings.

IPACS spent most of the time on modelling the aircraft’s systems as well as finetuning the flight model to match real-world performance and handling. The underlying physics of the rotor components had been implemented on the R22 and this could be reused on the EC135 or in fact any other helicopter project that may follow. 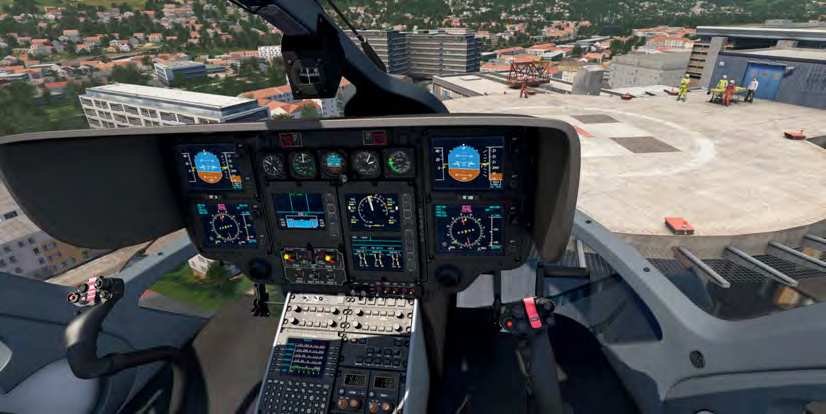 The systems in the EC135 have a lot to offer for flight simmers with all levels of experience. First of all, like the real machine, it has a flight controller that stabilises the helicopter. The Stability Augmentation System (SAS) on the EC135 makes it relatively easy to control so that even beginners will be able to fly it. On top of that, it has a fully functional autopilot, which can be used to fly pretty much hands-off or even full IFR approaches. Since the autopilot doesn’t control the collective (as in the real world), you still need to make manual adjustments to change the engine power. The helicopter is very stable partly due to its size and also thanks to the SAS and autopilot, but it is also very agile and is even capable of performing loops or rolls. Torsten said: “Several realworld pilots were involved in tuning the flight model and they were surprised by what is possible with today’s flight simulators.”

The EC135 can be started from a cold and dark state and the systems boot-up realistically as the custom electrical system provides power to individual subsystems; the crew alerting system even shows those areas which are inoperative. The checklists on the Aerofly Wiki page (www.aerofly.com/ dokuwiki/) for the EC135 greatly helps with starting the aircraft. The helicopter features an authentic sound set with engine spoolup effects along with ignition sparking and combustion sounds. There are even rattles from the rotor along with flapping sounds during turns and descent.

The EC135 is designed for VR. It sports a high-quality 3D model with HD textures and an equally detailed cockpit. Performance is excellent, which is essential in VR. In terms of quality, it is easily on a par with payware add-ons. If you already own a copy of Aerofly FS 2 we highly recommend taking the EC135 out for a spin.

In conclusion, Torsten said IPACS will continue developing the EC135 and all of its other aircraft and they would love to add more helicopters in the future. Currently, it’s still too early to reveal what’s coming in the pipeline but Torsten hinted that new and big features are currently in development.