Behind the gloss, the trade shows are arenas for an ongoing contest of one-upmanship, a game of power play between the two major commercial aircraft original equipment manufacturers (OEMs), Airbus and Boeing.

Perhaps the Boeing 737 MAX grounding might temper some of the usual talk about how many billions of dollars-worth of business is generated, but the manufacturers will still use the year’s biggest aerospace shop window to seize industry headlines.

A big part of those headlines when shows like Paris roll around are commercial aircraft orders. This area of the business has its own specific lexicon: firm orders, options, commitments, purchase agreements, letters of intent and memoranda of understanding. What does it all mean?

A firm order is a confirmed contract for a specified number of aircraft with details about pricing, guarantees and support arrangements. These contracts often include options, secured delivery positions (a fee is required to secure the position) that can be firmed later.

Purchase commitments, purchase agreements, purchase rights and conversion rights are more provisional deals that do not contain the specifics of pricing, payments, delivery and support arrangements. These various types of commitments, agreements and rights are most common in the deals for single aisle narrowbody jets, as they provide flexibility for customers who may wish to upsize to a larger family model later.

A letter of intent (LOI) or memorandum of understanding (MOU) is an agreement between an OEM and the customer indicating the future path towards a purchase agreement and subsequent fully negotiated contract and firm order.

Aircraft evaluation and buying airliners is, of course, a complex, multistage process involving different players, from analysts and investors to engineers and pilots. The trade shows like Paris are not decisive in this wider process, but they are nonetheless significant in controlling the news agenda.

The consequence is the OEMs typically use several tactics during these events to seize the headlines. One common ploy is to announce ‘orders’ that in fact are only at the earlier stages of negotiation and still have to be fully firmed and finalised.

Airbus has for years used the trade shows to unveil MOUs and LOIs for new business, the announcement at last year’s Farnborough that JetBlue had signed an MOU for 85 A320neo Family aircraft a recent example. Boeing uses this tactic, too; during Farnborough last year, it announced a slew of purchase commitments for 737 MAXs, 777s and 787s from customers including Air Lease Corporation, British Airways, DHL Express and VietJet.

Other tactics are to stockpile business before a show (whether that business is firm or a more provisional agreement, LOI or MOU) and then reveal it during the event. The manufacturers may also reveal customers already unnamed on their orders backlogs. At Farnborough last year, Airbus announced an order from the lessor Goshawk Aviation for 20 A320neos previously ‘undisclosed’, while Boeing unveiled 737 and 787 orders previously ‘unidentified’.

An announcement about ‘new business’ might sometimes actually just be the progress to the next stage of a previously disclosed deal. At Paris in 2013, for example, Airbus announced an order from Lufthansa for 90 A320neo Family aircraft, but this simply firmed an MOU from three months earlier. At Farnborough 2018, Boeing announced a firm order from Hawaiian Airlines for ten 787-9s plus ten options, firming a purchase agreement originally announced a couple of months beforehand.

Does the use of all these tactics matter? In one sense, no, because ultimately what matters to the OEMs are the signed-and-sealed firm contracts to bring in revenues.

However, the fine margins in market leadership in the closely contested duopoly in the aerospace business mean announcing business – even if that business is still short of being fully finalised – is important in influencing perception.

All these tactics create a tit-fortat atmosphere during a show like Paris as the OEMs try to outdo one another with new business. Manufacturers now seem keener to announce undisclosed business (at Farnborough 2018, the OEMs unveiled orders for more than 400 aircraft to unnamed buyers), a clear sign the OEMs know any announcements shape the narrative.

Just look at Farnborough 2018. Post-show, Airbus boasted about “new business for 431 single-aisle and widebody aircraft”, but in its offcial orders totals at the end of July 2018 just eight jets had been added to its firm orders backlog. Eight firm orders, of course, sounds far less impressive than 431 ‘orders’ if all the agreements, MOUs, LOIs and options are combined

Right there is the crux. Appearance is everything, which probably means the closely fought contest for market share between the OEMs and the numbers game will continue. 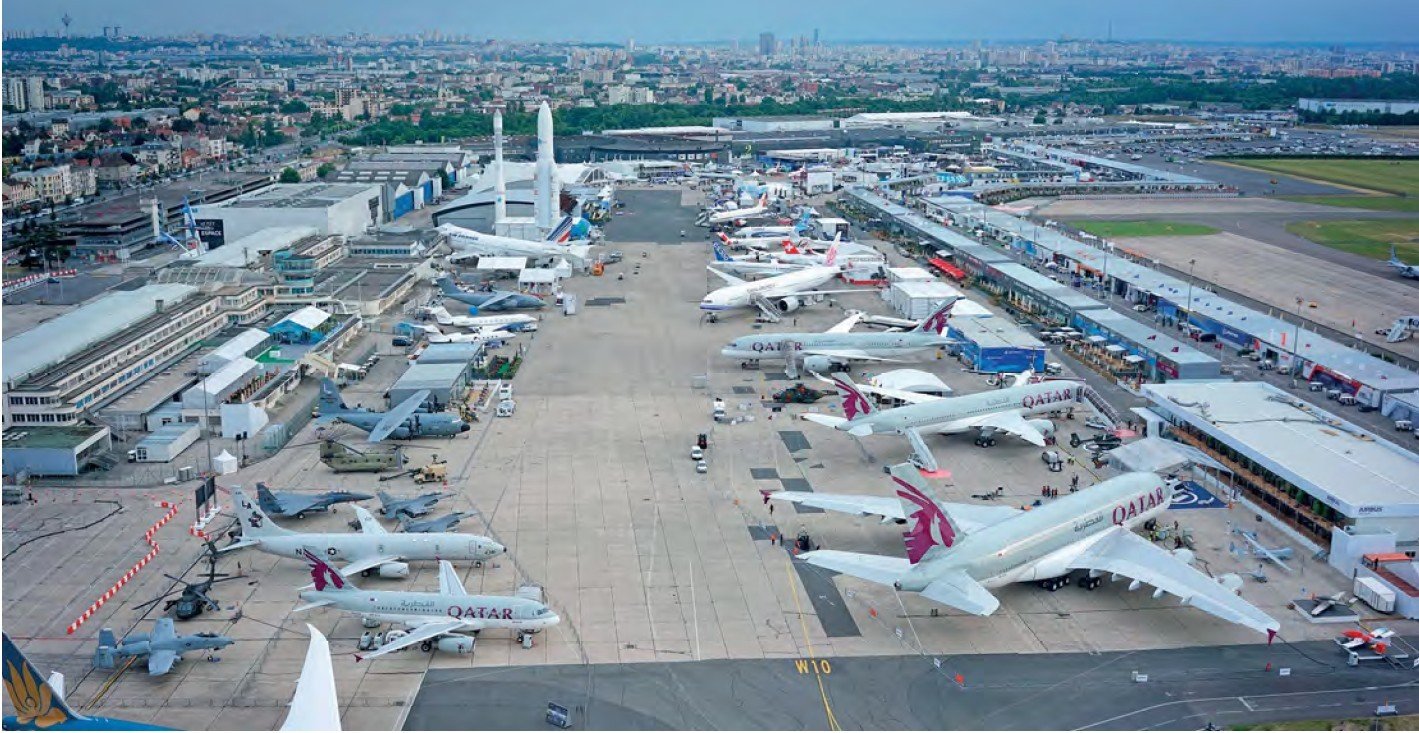 The Paris Air Show in 2015. Trade shows such as Le Bourget are arenas for an ongoing contest in orders announcements between manufacturers.
R Gnecco/Airbus