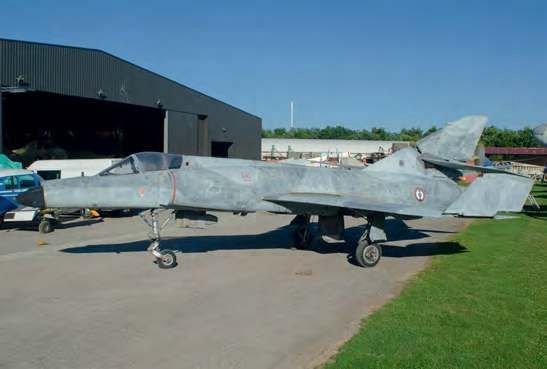 Looking rather weathered after spending the past four years as a deck crew trainer at Hyères, Super Étendard serial 25 is shown shortly after arrival at the Ailes Anciennes facility at Toulouse.
MAXIMILIAN MEINDL

In early June, Dassault Super Étendard Modernisé serial 25 arrived at the Ailes Anciennes Toulouse facility at Blagnac. The machine had been retired from active service in 2014 and was subsequently used as a deck crew trainer on the Aéronavale base in Hyères, southern France. During its active service, the aircraft served with Flottille 17F and was the lead aircraft for the very irst attack carried out by the type when four Super Étendards from the French carrier Foch attacked Syrian artillery positions in Lebanon in September 1983 during the Lebanese civil war.

Ailes Anciennes president Jean-François Bruna-Rosso says, “With the acquisition of the Super Étendard, we are able to give our visitors a very comprehensive view of post-war French naval aviation. In our exhibition area, they will be able to see most of the relevant aircraft and helicopters including the Breguet Alizé submarine-hunter, Vought F-8 Crusader, Dassault Étendard IV, and Piasecki H-21 and Sikorsky H-34 helicopters.”