Why a one-week-old airBaltic A220 flew to Africa

AirBaltic’s newest Airbus A220 has had a busy first week in service taking part in a demonstration tour to Africa.

The A220-300 was ferried from the manufacturer’s Mirabel production facility in Quebec to the airline’s base at Riga International Airport on December 1. The seven-hour 36-minute flight took the narrowbody over Greenland and just south of Iceland, covering a nonstop distance of around 4,000 miles (6,400km).

Between December 2 and 4, Bravo Lima flew in regular commercial service to destinations including Tallin, Rome, Helsinki, and Stockholm.

The following day, it departed Riga at 5.30am UTC bound for Palma de Mallorca where it arrived at 9.20am. After a two-hour fuel stop, the aircraft took off again this time heading to Luanda/Quatro de Fevereiro in Angola.

The seven-hour 26-minute long-haul flight was completed nonstop, and the jet arrived in the African country at 8pm.

The airline confirmed to Key.Aero that it was taking part in an Airbus demonstration tour to Africa, where it would be showcasing its A220-300 to customers, international media, and other guests. 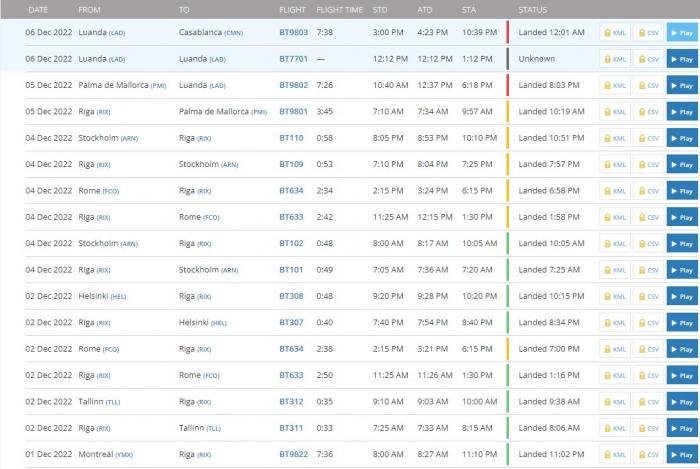 TAAG Angola Airlines revealed it was the focus of the tour stop in the city in a series of social media posts. The state-owned airline is set to receive six examples from January 2023 through to 2024 on lease from Air Lease Corporation (ALC).

Just after midday on December 6, the jet took off for an hour-long demo flight to the south of Luanda.

Later that day, the aircraft departed the Angolan capital northbound on a 7-hour 38-minute leg to Casablanca in Morrocco.

It’s not clear which airline is the focus of this stop. However, earlier this year Royal Air Maroc revealed it was preparing to replace its ageing Boeing 737 fleet.

An airBaltic spokesperson told Key.Aero that the narrowbody will return to Riga on December 9 at around 2.00am local time and resume operations the same day.