Airbus A380 variants that were never produced

The world’s largest passenger aircraft has only ever been manufactured in a single model, but here are the four derivatives that were proposed but never made

The Airbus A380 – which has been in production since 2003 – has remained relatively unchanged since its introduction into service in 2007.

The double-deck superjumbo was positioned as being a competitor to the Boeing 747 in the long-haul market and like its American counterpart, several of its proposed variants never made it very far from the drawing board.

The most high-profile undeveloped example is the A380F, which the European manufacturer began offering in June 2005. Capable of carrying 150 tonnes over a 5,600nm range, the jet would have had a 7% better payload and range than the 747-8F.

There was initial interest in a cargo version of the giant aircraft from the likes of FedEx Express and UPS Airlines who both order ten examples each.

Delays in the production of the passenger variant negatively impacted the timeline of the freighter version. As a result, FedEx cancelled its order in 2006 and moved back across to Boeing cargo jets. UPS Airlines eventually abandoned its order in March 2007, leaving the airframer with no customers for the type.

The A380F was displayed on the Airbus website until 2013 when it was quietly dropped from the company’s line-up.

Despite being 73m (240ft) long, a lengthened variant of the A380 was proposed at the launch of the type in December 2000. In November 2007, John Leahy, the company’s chief commercial officer confirmed plans for a stretched variant with more seating space.

Dubbed the A380-900, the jet would have space for 650 passengers in a standard configuration and up to 900 in an all-economy class setup. More than half a dozen airlines expressed an interest in the variant, but development was postponed until production of the -800 stabilised.

In June 2015, Leahy again stated that Airbus was looking at the A380-900 programme. The latest concept would be a stretch of the -800 offering 50 additional seats – not 100 as originally thought.

The scheme was envisaged to tie into a potential re-engining of the type.

At the same time as the discussion about stretching the type was taking place, the firm was reported to be exploring the potential for a re-engined ‘neo’ variant.

In July 2015, Fabrice Brégier, the then CEO of Airbus said that the company would build a new version of the double-decker which featured new improved wings and new engines. The neo moniker would have fallen in line with its other next-generation offerings for its other aircraft families.

The engine would most likely have been one of a variety of all-new options from Rolls-Royce, such as derivatives of the A350’s XWB-84/97 turbofans.

In June 2016, Emirates president Tim Clark said the company’s talks between Emirates and Airbus on the A380neo had lapsed. The following June, Brégier confirmed that the company wouldn’t be launching the variant because there was “no business case to do that”.

At the 2017 Paris Air Show, the European manufacturer proposed the A380plus, an enhanced version of the superjumbo with 13% lower costs per seat. The variant also featured 80 more seats sourced through better use of cabin space, split scimitar winglets and wing refinements which would allow for a 4% fuel economy improvement and longer maintenance intervals. 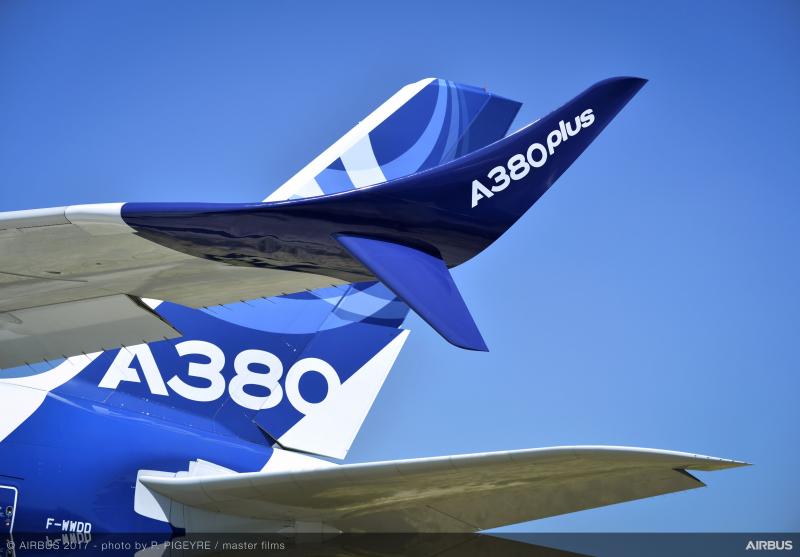 The maximum take-off weight was also in line for a three-tonne increase, which would allow it to carry more passengers over the same 8,200nm range or increase its reach by 300nm.

The variant would also use the in-flight entertainment system, flight management system and fuel pumps from the A350 to reduce weight and improve reliability and fuel economy. Light checks would be pushed back 250 hours to the 1,000-hour check and heavy maintenance downtime was set to be reduced to keep the aircraft flying for six more days per year.