With the delivery of the first A350-1000 to launch customer Qatar Airways in February, Airbus is focusing on the growing Asia-Pacific market and has recently completed a region-wide demonstration tour with the aircraft, as Nigel Pittaway reports 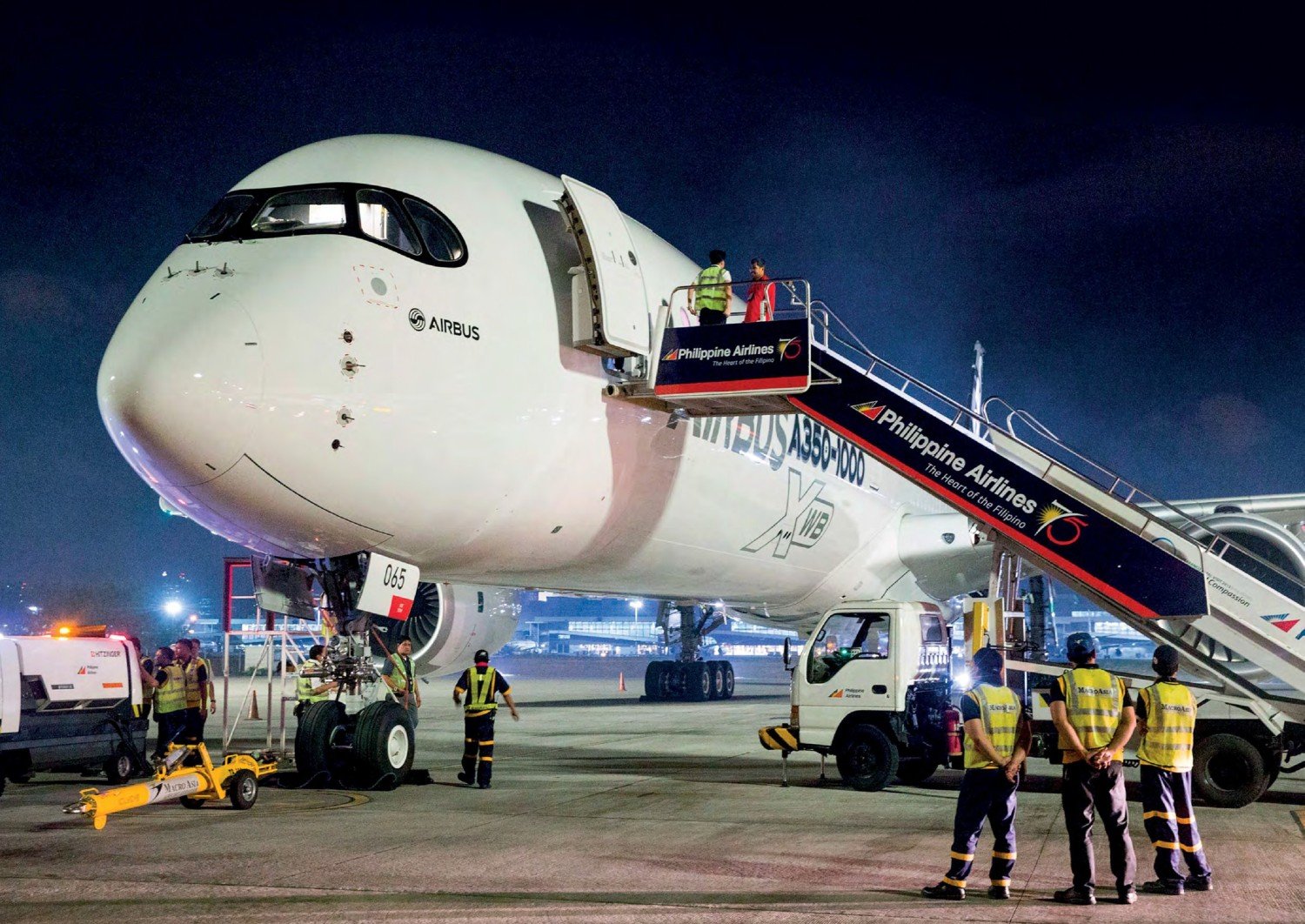 Airbus handed over the first A350- 1000 to Qatar Airways during a ceremony at the manufacturer’s headquarters in Toulouse on February 20, 2018, albeit some time behind the original schedule due to delays with the innovative ‘Qsuite’ business class seats selected by the airline. 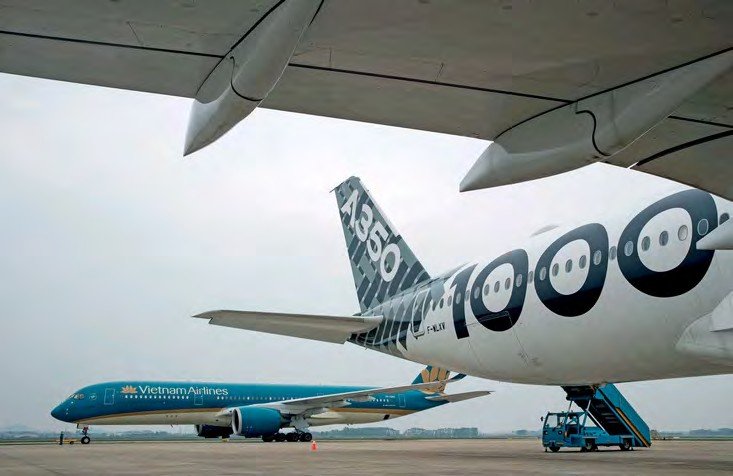 The aircraft is the first of 37 of the largest member of the A350 family on order for Qatar Airways and it joins a further 21 A350-900s (out of 39 on order) already in service with the airline at the end of February.

Of the 169 A350-1000s currently on order for 11 airlines, three carriers in the Asia-Pacific region have already committed to a total of 43 aircraft, representing just over one quarter of the total. Looking to the future, Airbus sees a demand in the region over the next two decades for 4,000 twin-aisle aircraft, representing 46% of the global total.

Accordingly, in the weeks leading up to the first delivery to Qatar Airways, the A350-1000 embarked on a whistle-stop demonstration tour of the Asia-Pacific region. The tour took in 12 destinations and included an appearance in the static display at the 2018 Singapore Air Show in early February.

The most obvious difference between the A350-1000 and its smaller sibling is a fuselage that is 7m (23ft) longer. The aircraft has 11 additional fuselage frames: five inserted forward of the wing between Door 1 and Door 2, and six aft of the wing, between Door 3 and Door 4. In a typical three-class cabin configuration, the A350-1000 can accommodate 366 passengers. In the present configuration adopted by Qatar Airways, this is 44 more seats that its A350-900.

Airbus claims that, together with the deletion of the overhead stowage bins in the centre of the premium cabins, the additional five frames provide 40% more space.

Like the smaller aircraft, the A350-1000 uses what Airbus calls biomimicry, which mimics the wings of birds, adapting the wing profile for different stages of flight. The flight control system uses the adaptive features of the wing design to optimise wing loading continually and reduce fuel burn. 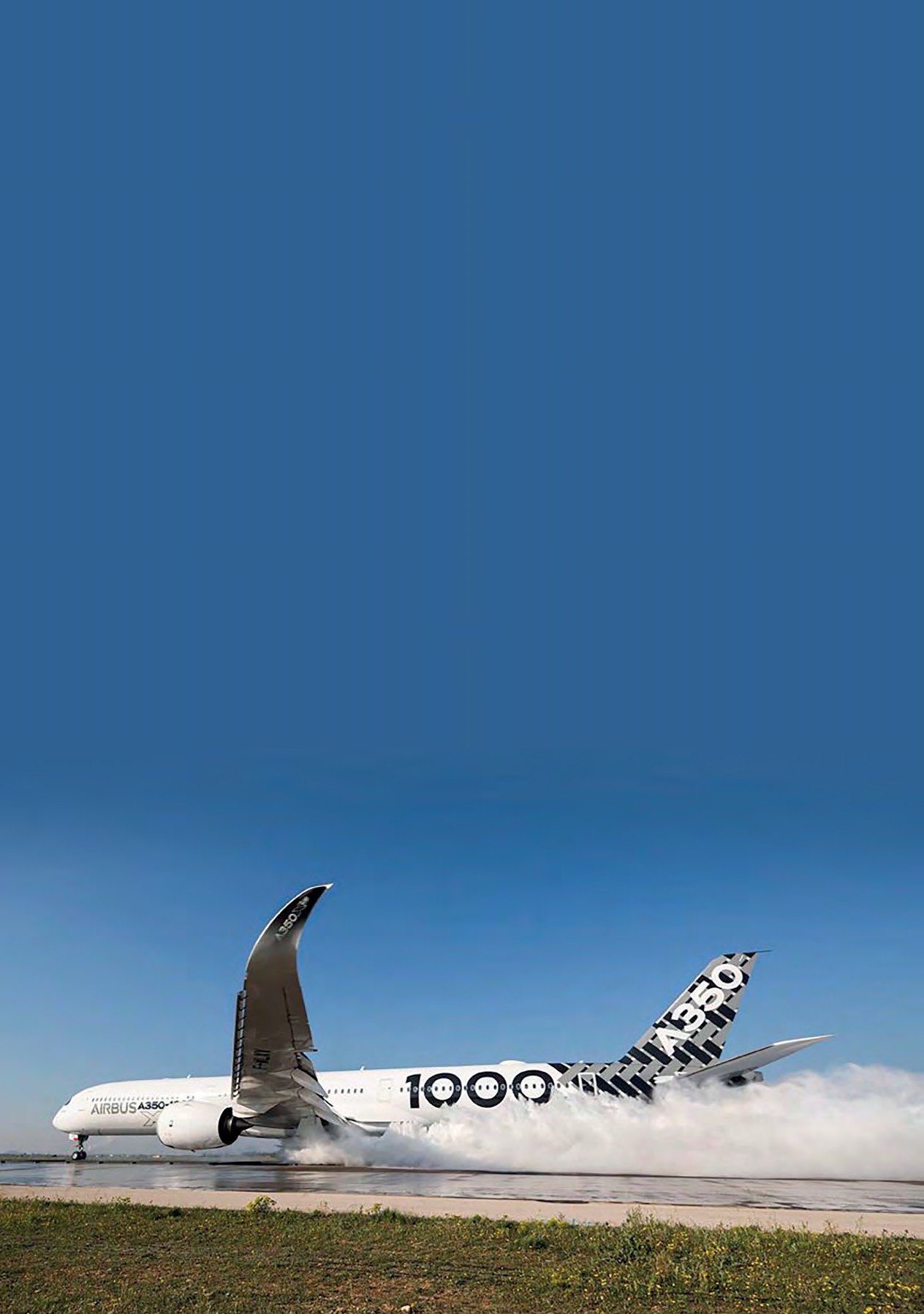 Water testing of the A350-1000 at Toulouse.
S Ramadier/Airbus 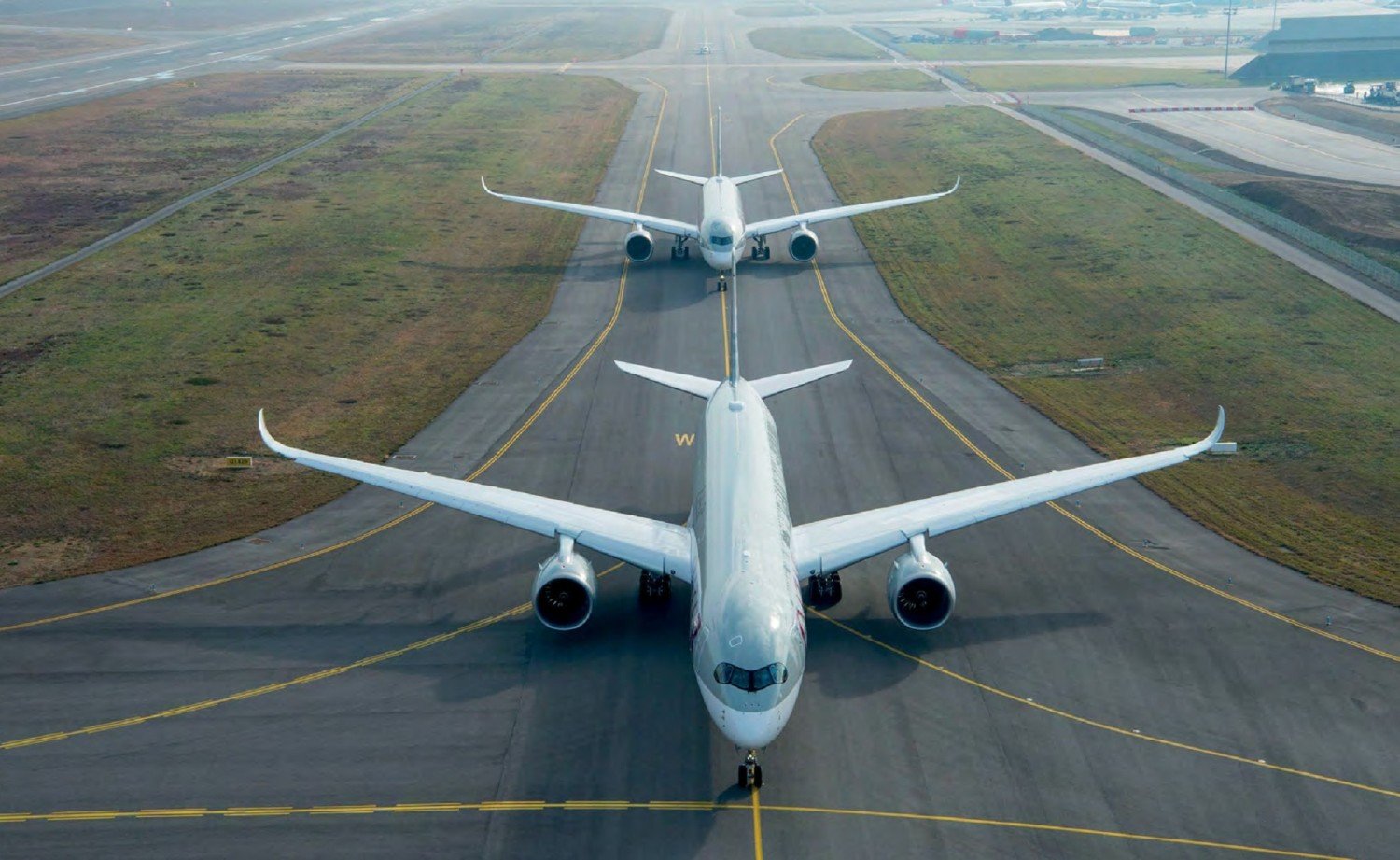 Airbus’ head of A350 Product Marketing, Marisa Lucas-Ugena, explained: “The wing is adapting. It’s moving continuously to adapt to each phase of flight, to optimise the structure of the wing and to provide great aerodynamic efficiency for the lowest fuel burn.”

The A350-1000’s engines are a higherpowered variant of the Rolls-Royce Trent XWB-84, rated at 97,000lb thrust (431kN) and designated Trent XWB-97. The fan diameter and nacelle are the same as the 84,000lb (374kN) Trent XWB-84, but the core of the engine utilises new materials and technology to accommodate the significant increase in thrust.

A further visible difference between the two A350 variants is the adaption of six-wheel main landing gear bogies to cater for the increased maximum take-off weight of the A350-1000, which at 308 tonnes (679,000lb) is 28 tonnes (61,730lb) higher than the standard version of the A350-900. The flight deck is similar to that of the A350-900, albeit with the introduction of touchscreen displays, and the two variants, together with the A330, all enjoy a common type rating for pilots.

Some 70% of the aircraft by weight uses advanced materials in its construction, of which almost 54% is carbon fibre reinforced polymers. Marisa Lucas-Ugena said: “The advantage of composite materials and metals such as titanium is that, in addition to their lower weight, we reduce aircraft maintenance costs, because they do not corrode. We will see tremendous savings in maintenance costs, which of course contributes to the total operating cost of an aircraft.”

During this period, the three aircraft accumulated 1,600 flight test hours, 1,000 hours fewer than the A350-900 test campaign, reflecting the commonality of the two variants and the maturity of the smaller aircraft.

Marisa Lucas-Ugena said: “The testing was mainly focused on the three elements we changed: the main landing gear, the higher thrust Trent XWB-97 engine and the training edge extension to the wings: the new aerodynamics. It was completed in less than 12 months and we’re happy with the results and that we achieved joint EASA and FAA certification after that time.”

Of the three A350-1000 test aircraft, msn 059 was fitted with a lot of flight test instrumentation (FTI) and was primarily engaged on flight envelope, systems and powerplant testing. Aircraft msn 071 also had a significant FTI fit and was primarily used for performance, systems and powerplant testing; and aircraft msn 065 had only a light FTI fit, but was the cabin development and certification, ETOPS and route proving test aircraft. 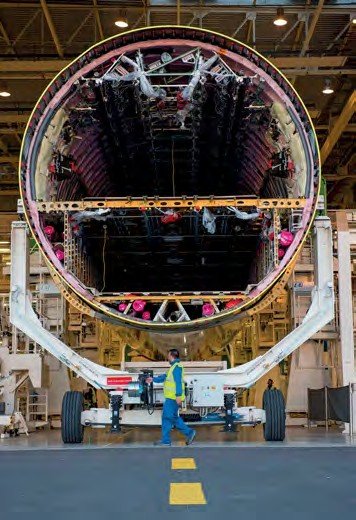 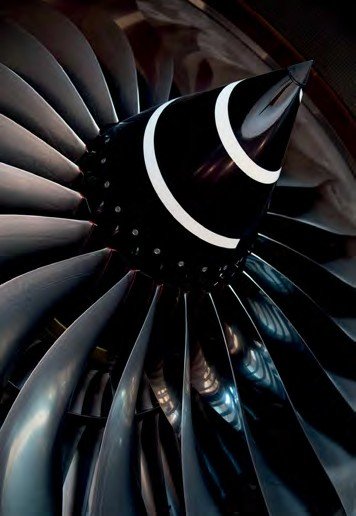 Marisa Lucas-Ugena said that theflight test results revealed that the A350-1000 performs either as expected or better. She said: “Low-speed performance is better than our expectations and when we look at critical airports around the world, where widebody aircraft are operating today, we see that we can deliver an average of five additional tonnes on the maximum take-off weight. So, whether it is hot weather or a high altitude or there are obstacles, we have achieved very good results. That is excellent news for critical routes and for the engine, which has an extra de-rating capability and therefore better maintenance costs.”

The aircraft has also proved to be slightly quieter than predicted, achieving a 16.6EPNdB (effective perceived noise in decibels) margin over ICAO Chapter 4 standards. This has resulted in the aircraft meeting the stringent QC0.5/1 regulations for night-time operations at London Heathrow Airport.

Marisa Lucas-Ugena said: “That’s very important for London and all the airlines thatfly there. The A350-1000 has achieved certification from EASA and the FAA, it has done it on time and it has met or exceeded our targets.”

The aircraft selected to perform the recent Asia-Pacific demonstration tour was, unsurprisingly, the only one of the three to be fitted with a fully functional cabin interior, F-WLXV (msn 065).

The cabin of msn 065 is configured with 40 Sogerma Solstys business class seats, 36 Zodiac US economy plus seats (in a nineabreast configuration) and a nine-abreast economy cabin with 219 (105 Zodiac US and 114 Recaro CL3620) seats, for a total of 285 passengers.

Aflight test station in the aft cabin of msn 065 is used by Airbusflight test engineers to monitor many parameters, including electrical and hydraulic power distribution, flight control position and engine performance. During the demonstration tour, theflight test engineers monitored the aircraft duringflight, but during the earlierflight test campaign they analysed the data in real time when required, but recorded the majority of the data for deeper analysis at the Airbus Flight Test Centre in Toulouse after eachflight.

The three-week tour departed from Toulouse and visited 12 destinations in a journey that covered over 55,000km (30,000 nautical miles). From Toulouse, the aircraft visited Doha (Qatar), where it was presented to launch customer Qatar Airways just weeks before it took delivery of its first A350-1000 on February 20. 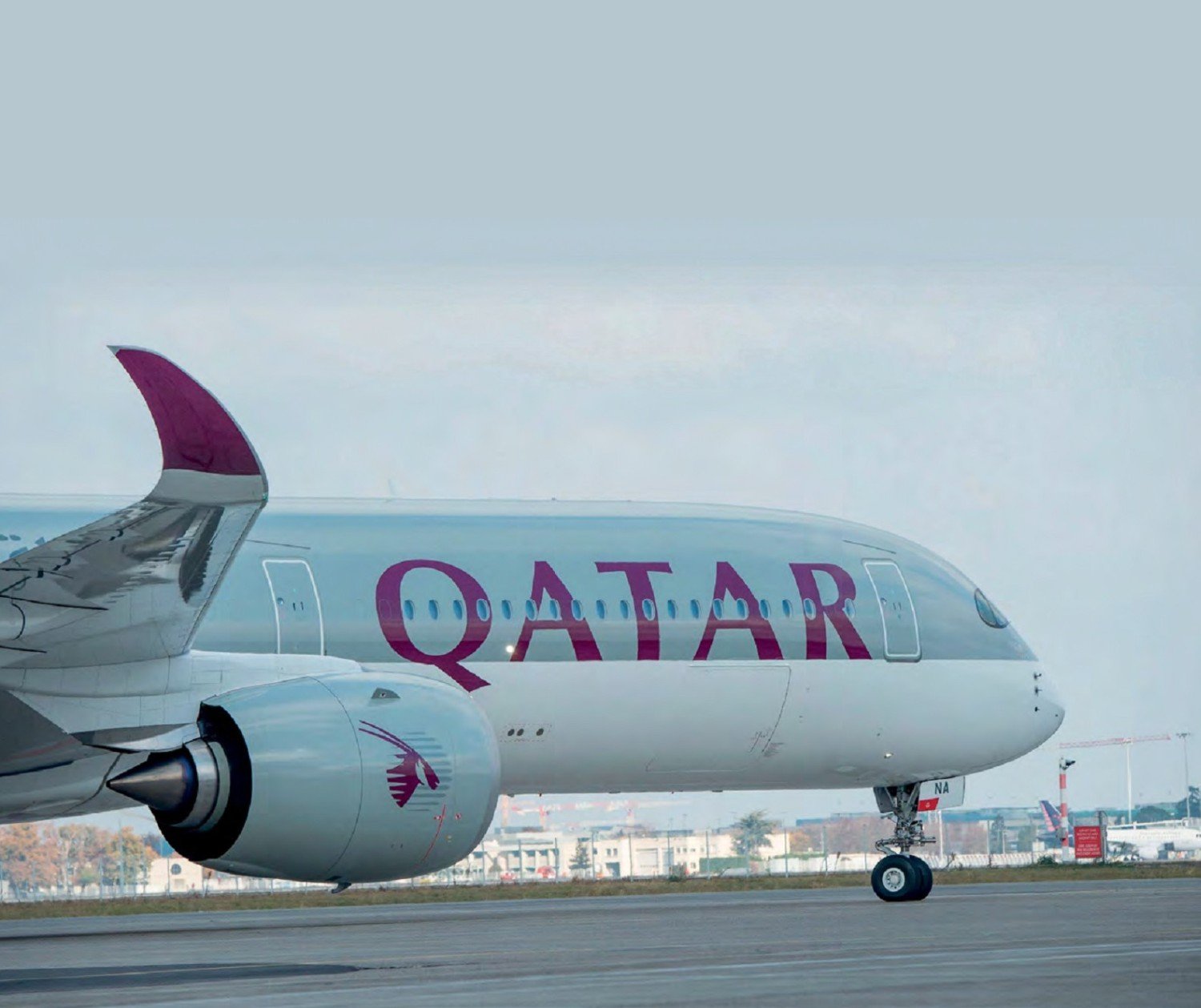 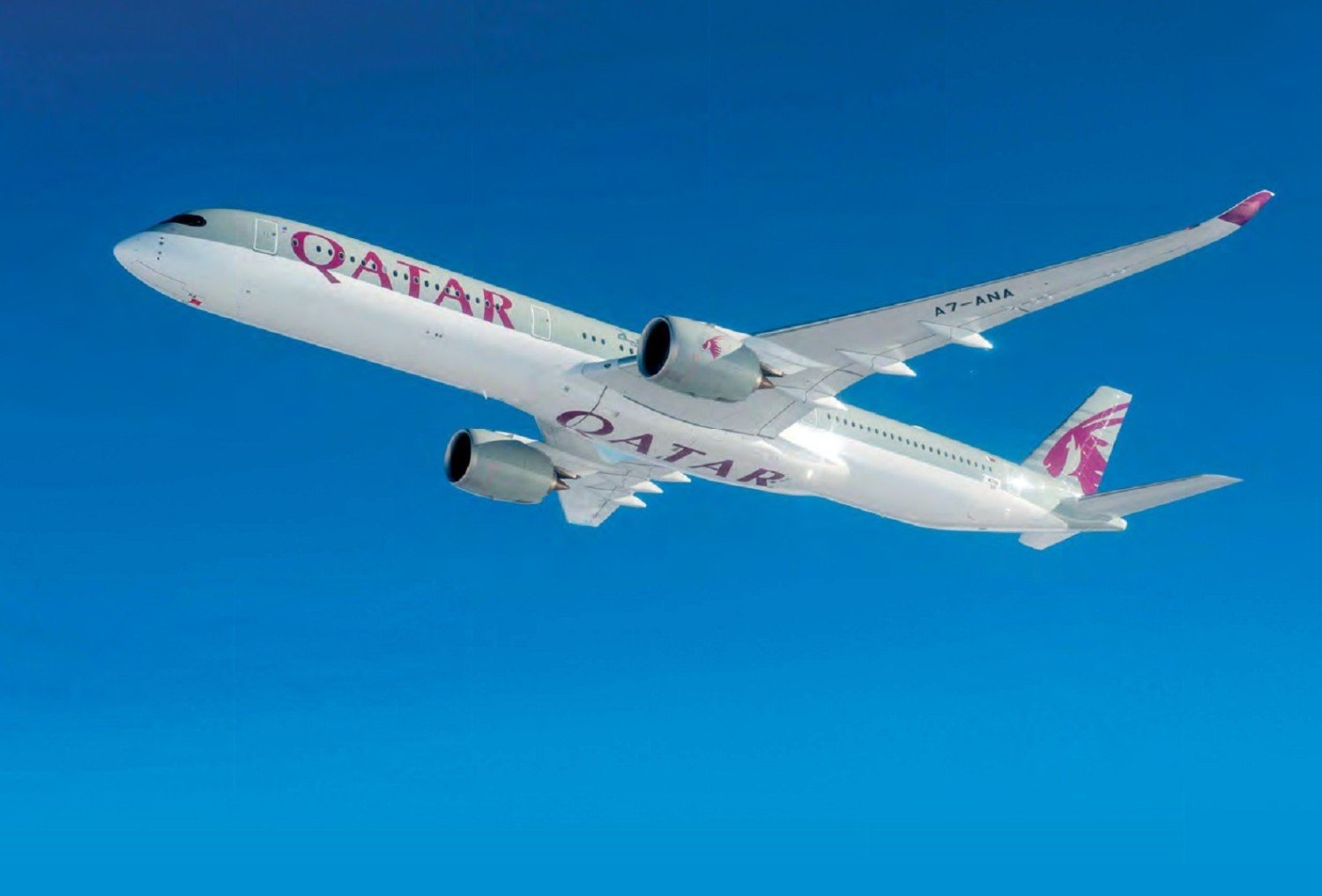 From Doha, msn 065 visited Muscat, Hong Kong, Seoul, Taipei, Hanoi and Bangkok, before arriving in Singapore on the eve of the 2018 Singapore air show. Following its presence in the static display over the first three trade days of the show, the aircraft carried on to Sydney, Auckland, Tokyo and Manila, before a non-stop returnflight to Toulouse.

Aside from Qatar Airways, the opportunity was taken to present the aircraft to Asiana Airlines, Cathay Pacific and Japan Air Lines, which are existing A350-1000 customers, and other potential customers in the region. 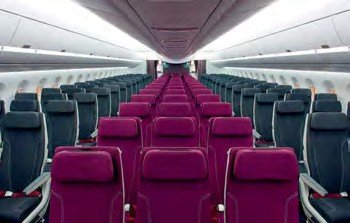 Marisa Lucas-Ugena explained during the stopover in Sydney on February 12, 2018: “We’ve brought the aircraft to Sydney as part of a long tour. We’ve been to Doha in the Middle East to see our launch customer and we’ve been all over Asia and the Pacific, because Asia-Pacific is growing fast and it makes a lot of sense for us to bring the A350- 1000 to this region.”

AIR International joined the aircraft at Qantas’ Jet Base at Mascot in Sydney for a short onehour demonstrationflight with representatives from Qantas, the Australian government, aviation authorities and members of the television and print media.

Among the Qantas representatives was Chief Executive officer Alan Joyce, who is considering the A350 as part of the airline’s re-equipment plans. In particular, the Australian airline is looking for an aircraft that can meet its requirements for a Sydney–London non-stop service in the 2022 timeframe, under its Project Sunrise plan.

Qantas beganflying the much-publicised non-stop Perth–London service using its newly delivered Boeing 787-9 aircraft on March 24-25, but the aircraft does not meet the airline’s requirements for the 9,173 nauntical mile (16,989km) Sydney– London service.

The airline is looking closely at the A350- 900 Ultra Long Range variant of the family, which is due to enter service later this year on the Singapore–New York route and is also talking with rival Boeing about alternatives. Qantas says it is looking for a family of aircraft to meet its future requirements.

An Airbus spokesman said: “It’s no secret that we’re in discussion with airlines already and we’re in discussions with Qantas to try to meet their range requirements, their comfort requirements, their performance requirements, and we know that they have delivery requirements, as well. Qantas is putting their needs on the table and it will be up to us to see how we can meet them. We’ve been working regularly with them for some months already.” From an A350-1000 perspective, Airbus says the Asia-Pacific market continues to grow in importance, with a predicted annual growth in terms of revenue passenger-km of 5.6%, leading to an overall demand of 14,450 new passenger and freighter aircraft over the next 20 years. Of this total, it predicts that 4,000 twin-aisle aircraft will be needed, representing almost half of the global demand at 46%.

Marisa Lucas-Urena explained: “Asia- Pacific is the region that is growing this global demand today and when we look at the future, for the next 20 years, that lead will still be clear. The traffic volume will multiply over what we have today by a factor of three. It’s a very important region for aviation and for Airbus in particular.

“When we look at the future and where the traffic will be, more than 70% of it will be connecting emerging economies. That means connecting big parts of Asia with the rest of the world and it will mean connecting the southern hemisphere with many more destinations than we do now, transpacific to North America and even Latin America.” AI