Airbus pitches H135 to US Navy 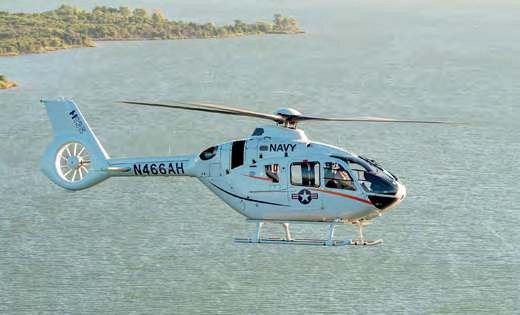 Airbus Helicopters demonstrated its H135 helicopter to the US Navy at the Naval Helicopter Association’s Fleet Fly-in at NAS Whiting Field, Pensacola between October 22-26, 2018.

The EC135 P3 helicopter, registered N466AH (msn 2013) was painted in US Navy markings but flown by Airbus pilots and conducted orientation flights with Navy pilots and other stakeholders during the event. Chris Emerson, President of Airbus Helicopters Inc.and Head of the North America Region, said: “Airbus Helicopters is convinced the H135 is the best solution to prepare the next generation of US Navy pilots for decades to come, both technically and economically.”

Emerson said that the H135s for the Navy would be produced at the company’s facility in Columbus, Mississippi, which currently assembles the UH- 72A Lakota helicopter for the US Army. To date, Airbus has delivered 431 Lakotas to the US Army since it was awarded the contract in 2006. Nigel Pittaway