In a first for Opération Barkhane, according to a May 17 press release, the Armée de l’Air carried out its first airdrop by means of an extraction parachute over Madama in the north of Niger in late April. 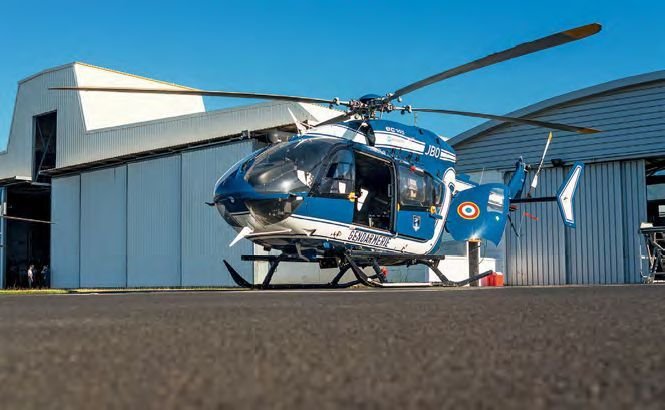 One of the EC145s assigned to the rotary wing of the French Gendarmerie. In 2018 the wing will receive a replacement for the EC145 that crashed in the Pyrenees last year.
Jan Kraak

The previous 48 air-drops by French forces in the Sahel region, all carried out in 2016, were standard parachute drops. The newly adopted technique allows the dropping of larger and heavier loads over the target areas, which are often forward operating bases (FOBs) located in remote areas difficult to access by road. Using the extraction parachute method means that more water, rations, fuel and materiel can be delivered in a single sortie, resulting in fewer re-supply sorties to the FOBs. This in turns relieves some of the operational pressure on the French tactical transport assets in the region. There is one drawback in that the extraction parachute involves additional work for those on the ground; the kits are re-usable so ground forces have to collect them for future re-deployment.

A French Ministry of Defence press release on June 23 regarding German- French cooperation at the airbase of Niamey in Niger provided a few details about the two Luftwaffe C-160D Transalls deployed there since April 1, 2016. The press release gives an account of the help that French mechanics provided to their German colleagues on May 24, 2017 when they helped repair a refrigerator, needed to keep medical supplies cool, aboard a MEDEVAC-configured Transall. According to the Armée de l’Air, French personnel regularly assist the 40-strong German forces whenever the C-160s encounter technical issues. Furthermore, the press release notes that, although the German deployment operates under the mandate of the United Nations Multidimensional Integrated Stabilization Mission in Mali (MINUSMA) and the EU-Training Mission in Mali (EUTM), the Transalls can be tasked to fly logistical support missions for Barkhane.

The Armée de l’Air flew two Mirage 2000Ds as well as two Mirage 2000Ns to N’Djamena in Chad on June 6 as replacements for the four Mirages deployed there for some months.

On July 1, a heavy storm passed through N’Djamena airport, which is not only home to the French air-assets assigned to Opération Barkhane but also to the majority of the Chadian Air Force fleet. The storm devastated the airport and several hangars were destroyed. Photos published by the Chadian newspaper Tchadactuel show three AS350/AS550 Fennec helicopters that appear to be write offs as well as several damaged aircraft: one MiG-29 Fulcrum, two Su-25 Frogfoots and a Pilatus PC12. There are no photos of the French aircraft present at N’Djamena at the time of the storm but several French media outlets have quoted sources within the French Ministry of Defence as having said that one C-135FR sustained minor damage and two CASA CN235s need to be inspected by specialists from Airbus, which may suggest that the damage to the CN235s is substantial. This is not the first time heavy winds have damaged French aircraft deployed for Opération Serval/Barkhane; three Aviation Légère de l’Armée de Terre (ALAT) Pumas were completely written off when they were blown over during a sandstorm in 2013.

In an article published on July 4, French newspaper Ouest-France disclosed a request for proposal (RFP) for the charter of two transport aircraft for France’s special forces – the Sabre task force – based at Ouagadougou in Burkina Faso. The machines would be used across Burkina Faso, the Central African Republic, Chad, Cameroun, Gabon, Ivory Coast, Libya, Mali, Mauritania, Niger and Senegal. According to Ouest- France the RFP, which expires on July 25, 2017 concerns two categories of light to medium transport aircraft. Firstly, an unspecified type of Beechcraft capable of carrying 800kg (1,764lb) or six personnel over a distance of 1,000km (540 nautical miles) from Base Aérienne 511 Ouagadougou. Second on the list is an Antonov 26-100 type able to carry five tonnes or 25 personnel over the same distance. The contract would initially be for six months and, according to the newspaper, can be renewed up to five times, bringing the potential length of the contract up to 36 months. The winner of the contract will be expected to provide the aircraft and their crews 24 hours a day, seven days a week and 365 days a year. 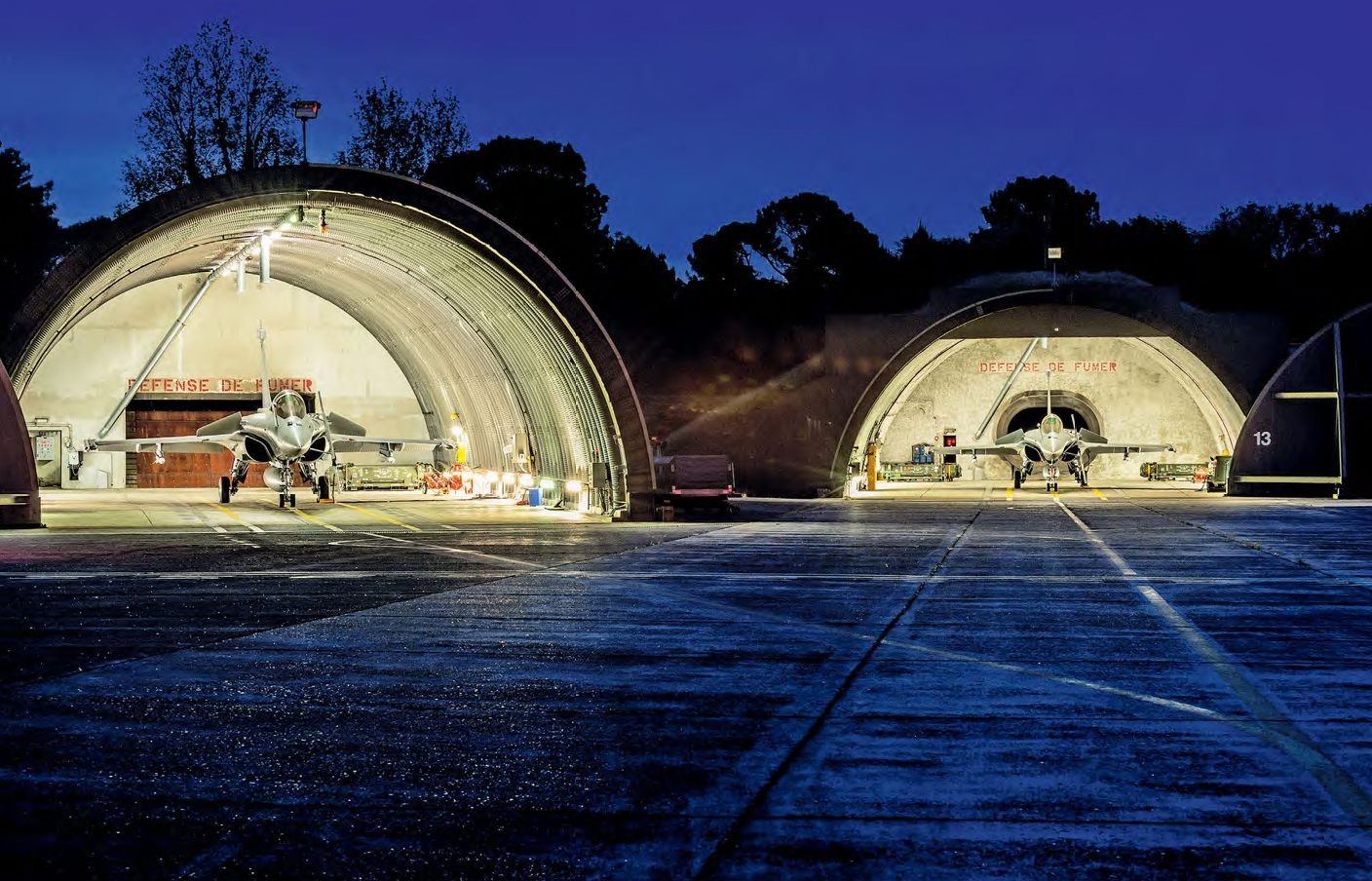 Two Rafales at the QRA compound at BA118 in May 2017. Both aircraft are equipped with two MICA IR and two MICA EM missiles.
Jan Kraak

After the closure of BA110 Creil-Senlis, the Armée de l’Air started working on a QRA facility at BA105 Évreux-Fauville. The facility, which consists of three aircraft shelters and housing facilities for the airmen on QRA-duty, was first tested in March 2017. Although Mirage 2000s and Rafales can be accommodated, so far only the latter have been deployed to Évreux. From June to July, two Rafales from Escadron de Chasse 30 at BA118 Mont-de-Marsan were based at BA105 to provide a QRA capacity close to the French capital during the Le Bourget air show and the Bastille Day flypast on July 14. According to a local newspaper, Évreux will become a permanent QRA facility by late 2017 or early 2018. The QRA at BA705 Tours-Saint Symphorien will end when the airbase closes in 2018, so Évreux will be the sole QRA facility in central France. Besides its proximity to Paris, the base is also located reasonably close to the English Channel, making it a suitable base from which to launch intercepts of Russian long-range bombers when they fly off the French coast.

New H145 for the Gendarmerie

According to an Airbus Helicopters press release on June 20, 2017 the rotary wing of the French Gendarmerie, Forces Aériennes de la Gendarmerie Nationale (FAGN), has ordered an additional H145. After the crash on May 20, 2016 of one of the H145s assigned to the Détachement Aérien at Tarbes, in which all four Gendarmes on board perished, the FAGN fleet included 26 AS350BA/AS350B2s, 15 EC135T2s and 14 EC145s. As the H135 is not as powerful as the EC145, it cannot be assigned to mountainous areas so a H135 cannot be used to replace a H145, leaving a capability gap following last year’s crash. According to the Airbus press release the new H145 will be delivered to the FAGN in 2018. The helicopter will have the same configuration as the 14 EC145s already in service with the Gendarmerie.