HYBRID AIR Vehicles (HAV) says its Airlander hybrid aircraft has potential in a variety of applications, from cargo transport and communications to survey and search.

However, it is in another realm – luxury tourism – in which this giant aircraft, the world’s longest at 92m (302ft), will be tested in 2018. In October, HAV announced the British luxury travel company Henry Cookson Adventures will assess the Airlander’s potential for the ultra-high-end segment of the tourism and adventure travel market.

Details about the trial are thin on the ground. HAV has merely said the flight will be an “expeditionary journey” and would be Airlander’s “maiden international flight”.

The Airlander combines the characteristics of fixed-wing aircraft and helicopters with lighter-than-air technology. Some 60% of its lift is produced aerostatically, with buoyancy provided by its helium-filled, laminated fabric hull envelope. The other 40% comes from aerodynamic lift generated by its wing-shaped hull, which is an elliptical cross-section allied to a cambered longitudinal shape.

The buoyant lift provides stability and the aerodynamic lift gives efficiency. The aircraft has four 325hp (242kW) V8 turbocharged diesel engines, which can be rotated to provide additional thrust for take-off, hover and landing.

HAV says the combination of buoyancy, aerodynamic lift and vectored thrust provides stability, manoeuvrability and efficiency and that the aircraft will have, “a significantly lower carbon footprint than other forms of air transport”. Airlander is designed to remain airborne for up to five days at a time.

Abrasion-resistant pneumatic skids on the underside of the outer hull means the Airlander can land on any surface, including ice, sand and water. A payload module along the hull centreline comprises a flight deck with payload compartment at the fore, a midbody payload beam for externally slung loads, and an aft section for fuel tanks and additional payloads.

The 20 x 3.2 x 2m (65 x 10.4 x 6.5ft) cabin will be configurable for different roles, with floor-toceiling windows for passenger transport. The flight deck will consist of one pilot station and one observer seat (or two pilots in the production version).

The Airlander’s combination of endurance and land-anywhere capability has led HAV to say the aircraft presents: “a brandnew option for high-end, luxury tourism. The ability to stay aloft for days at a time, in virtual silence, with floor-to-ceiling windows and fresh air make Airlander perfect for cruising in exceptional locations.”

Henry Cookson Adventures, which will trial the Airlander next year, describes itself as a “leading authority at creating tailored adventures and luxury experiences”. HAV says after the 2018 trial flight Henry Cookson Adventures plans to take a typecertified Airlander, “to a range of destinations at client request, experiencing landscapes that vary as diversely as the North Pole, Bolivian Salt Pans and Namib Desert”.

Design Q will design and manufacture a luxury cabin for the aircraft, making use of a £60,000 UK government grant to help develop it. Joint founder and Chief Executive Officer Howard Guy said the Airlander, “demands an interior that truly breaks new ground and provides an experience that will be unlike anything seen before”. Design Q has worked with several major aerospace and automotive companies and has designed the Bombardier Global 7000 business jet cabin.

The Airlander 10 flew again in May 2017 after extensive repairs and engineering changes were carried out following the damage sustained during a landing accident during its second test flight from its Cardington, Bedfordshire base in August 2016, including a more powerful and manoeuvrable mobile mooring mast and an improved landing system. Mark Broadbent 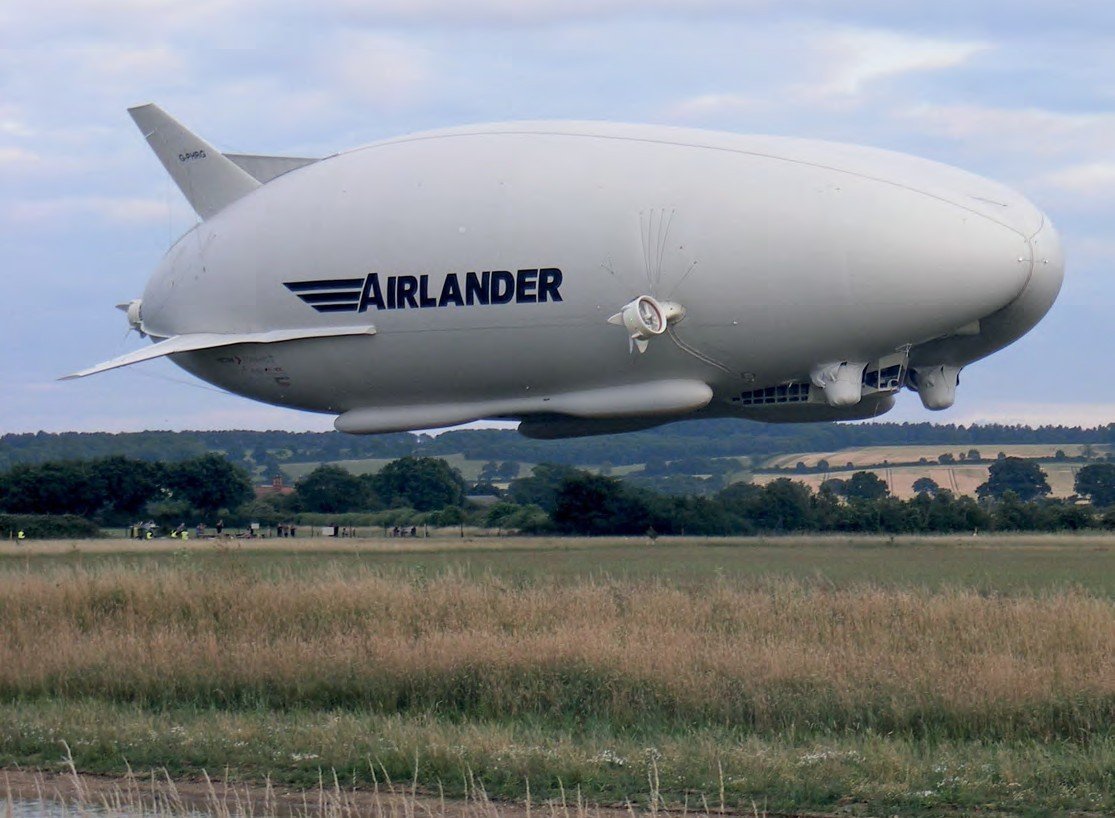 The Airlander 10 has completed three test flights this year and is pictured here on final approach to land at Cardington in July 2017.
Hybrid Air Vehicles