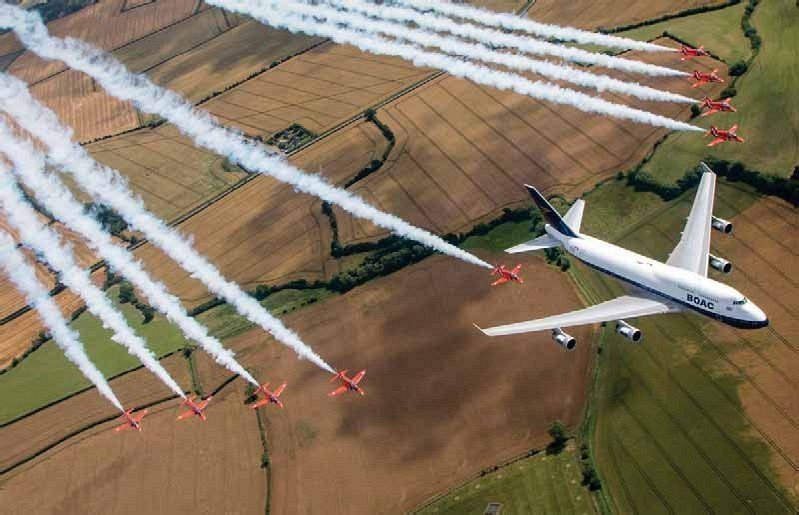 The magnificent spectacle of the BOAC-schemed British Airways Boeing 747-436, G-BYGC, in formation with the Red Arrows near Fairford on 20 July.
CROWN COPYRIGHT

Surely the most spectacular aerial celebration of the BA100 campaign took place at the Royal International Air Tattoo at RAF Fairford on Saturday 20 July, when British Airways’ Boeing 747-436 G-BYGC, painted in the colours of an early 747-100 of the British Overseas Airways Corporation (BOAC), joined up with the nine Hawk T1s of the Royal Air Force Aerobatic Team, the Red Arrows.

Th roughout this year, BA is marking the centenary of the first regular, scheduled operation by Aircraft Transport and Travel (AT&T), the oldest of the ‘ancestor’ companies that, though subsequent mergers, came together to form what is now the UK’s flag-carrier. The RIAT flypasts represented the sole airshow appearance of the season by any of the four BA ‘retro-jets’ in historic schemes — three 747-400s in BOAC and earlier BA liveries, and an Airbus A319 in a British European Airways scheme.

Later the same day, the show witnessed another airlinerrelated anniversary celebration, as the Red Arrows’ Hawks and the eight Alpha Jets of the French Air Force’s Patrouille de France came together in their respective Concorde formations as a nod to the 50th anniversary of the maiden flight of the Anglo- French supersonic airliner. On 9 April 1969 the first flight of ‘British’ Concorde 002, G-BSST, ended at Fairford, which was used by BAC as its main flight test base for the type until 1977.