For an aircraft to fly, it requires three things: lift, thrust and money. Lift and thrust can be designed in – they’re what wings and engines are for – but for any military aircraft, money has to come from the government. The government, in turn, has to get the money from taxpayers.

It’s easy to talk about getting money for airpower. It’s hard to actually get money. Congress decides how much to spend and where it will be spent, even though the Department of Defense submits a detailed annual request, which this year is yet to appear. It is harder still to turn money into airpower represented by aircraft on flight lines, proficient aircrew and combat-capable squadrons. Even the United States, with the world’s largest economy and most capable armed forces, finds it difficult to create and sustain effective airpower.

In all probability, defence spending was going to go up regardless of who was in the White House. In its last budget request, the previous Obama administration said it would increase spending by $33 billion; but even in Washington, $54 billion still represents serious money and would bring the top line to a level still considerably less than it would have been under the provisions of the FY2012 presidential budget (the last before imposition of the current budget caps imposed by the Budget Control Act, the dreaded sequestration). The Trump top line is also less than Senator John McCain, chair of the Senate Armed Services Committee, has proposed. On February 27, the senator himself pointed out: “With a world on fire, America cannot secure peace through strength with just 3% more than President Obama’s budget. We can and must do better.”

Fourteen KC-135 Stratotankers lined up during a simulated alert call to demonstrate rapid mobility capabilities within minutes of being notified of a mission at McConnell Air Force Base, Kansas.
Airman 1st Class Christopher Thornbury/US Air Force

Of course, there is no guarantee that $604 billion will be the amount made available to fund US national security for FY2018 starting on October 1, 2017. It would be unwise to bet your own money on this being the case. Trump’s top line is more than 10% over the $549 billion budget cap imposed by the Budget Control Act (on pain of sequestration of funds). It will require at least 60 senators to agree to change this. One way around it would be to use overseas contingency operations funding to meet the higher top line, which is not subject to the budget cap.

This is a possible – indeed, likely – outcome, but is likely to encounter extensive political opposition in the Congress from both senators and representatives on both the left (those opposed to higher defence spending) and the right (those opposed to increasing budget deficits). With the Trump administration proposing spending cuts in other government departments – including the US Coast Guard, whose airpower has to sustain a high operational tempo – the Congress is likely to want to spread some of the pain around and include the defence budget.

Political processes involved would be complex even at the best of times. The dysfunctional nature of US politics in recent years, however, suggests that this year will be far from the best for defence spending, as well as for larger issues. “In terms of near-term readiness, there is a significant challenge in meeting not only the current operational tempo with training ready forces, but having sufficient forces ready to deploy in the event of an unforeseen contingency,” US Army’s Vice Chief of Staff, General Daniel Allyn, told the Senate Armed Service Committee (SASC) on February 8. He said the US Army needs “sustained, long-term, and predictable funding”. Right now, neither Allyn, nor the other service leaders, has that. 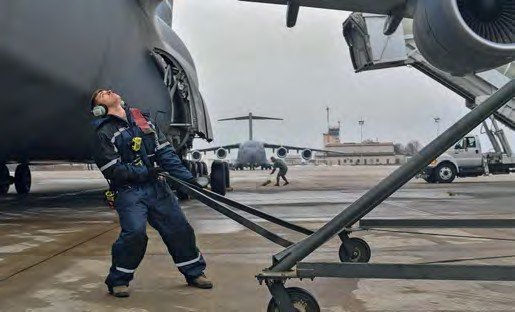 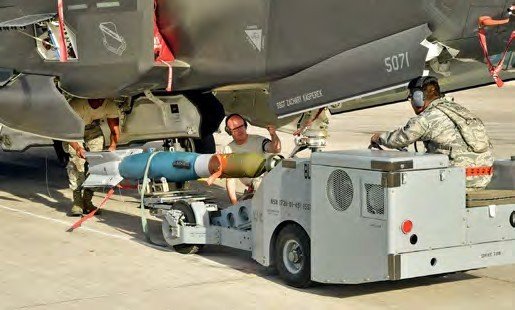 A weapons load crew assigned to the 34th Aircraft Maintenance Unit based at Hill Air Force Base, Utah, loads a GBU-12 into an F-35A Lightning II.
Nial Bradshaw/US Air Force 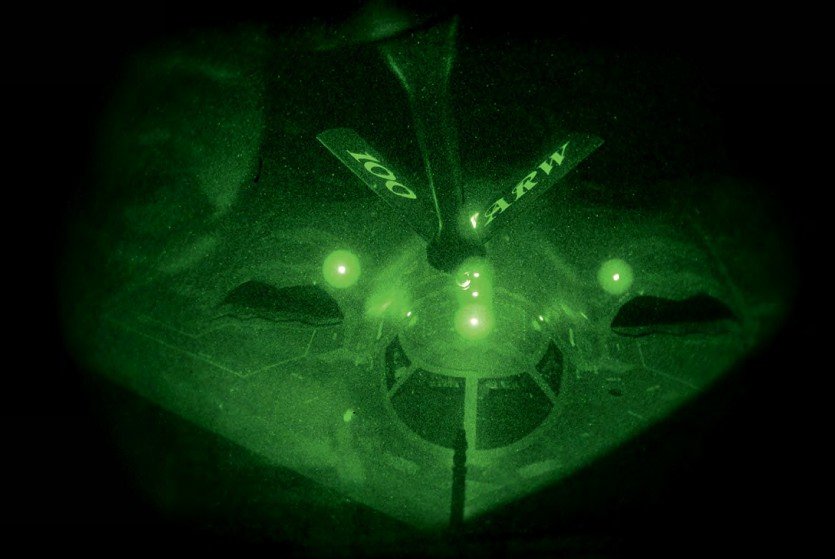 A KC-135 Strantotanker assigned to the 100th Air Refueling Wing refuels a B-2 Spirit from the 509th Bomb Wing during a mission that targeted Islamic State training camps in Libya.
SSgt Kate Thornton/US Air Force

Dysfunction has many costs, and money may be the least of these. US Air Force Chief of Staff General David Goldfein said in Washington on February 23 that if Congress fails to pass a FY2018 budget meaning the US Air Force has to operate under a yearlong continuing resolution (CR) instead, it will cost the service over $1.3 billion. Operating under a CR will also prevent new capabilities being deployed, aircraft being sustained and flight hours being funded. “There is no enemy on the planet that can do more damage to the US Air Force than us not getting a budget,” he said.

Similarly, Vice-Chief of Naval Operations, Admiral Bill Moran, told the Senate Armed Services Committee on February 7: “We are going to have to shut down two air wings,” and experience further deterioration in the shortfall of aircraft availability and aircrew flight hours if the US Navy has to continue until October 1 without a new budget or a supplemental FY2017 spending bill.

The supplemental budget request for FY2017, anticipated to be some $18 billion and come before the Congress in March–April, could not be acted on until the bill it is supplementing – the FY2017 Defense Appropriations Bill – is actually signed into law. In the absence of a signed appropriations bill, the US Department of Defense is funded by a CR that expires in April, so that, too, becomes uncertain. US airpower may be short on pilots (particularly in the US Air Force) and spare parts for US Navy and US Marine Corps F/A-18 Hornets, but it is not short of uncertainty in defence spending.

The uncertainty as to how much money is actually going to be available for the services to turn into airpower, starting on October 1, makes it hard for the services to set priorities. Do they buy new aircraft? More munitions for a potentially more intense conflict in Syria and Iraq? More spare parts to increase aircraft availability?

US Marine Corps General Joe Dunford, Chairman of the Joint Chiefs of Staff, said in Washington on February 23: “At the end of the day, we cannot be paralysed by tough choices. We have to frame those choices to the president and articulate the consequences of those choices and give him the chance to select one of those.”

In a press interview on February 8, John Lehman, who was Secretary of the Navy in the 1980s, said: “The priority is to achieve balance. Readiness and sustainability must be dealt with simultaneously embarking on procuring the necessary new ships and aircraft.” However, getting the balance right without knowing how much money is going to be available is difficult, but some of the ways to reduce spending to free resources to accomplish this goal have the potential to be counterproductive. 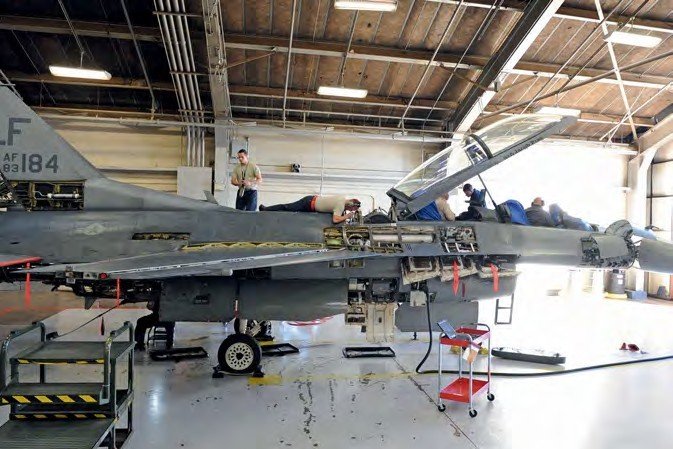 Whether what seems like a good idea for investing any additional money in an increased defence top line is going to prove counterproductive rather than enhancing airpower is difficult to determine, even among high-ranking professionals. For example, one choice that should not be made, if there is additional money available, is to boost procurement of Lockheed Martin F-35A Lightning IIs for the US Air Force.

Vice Commander, Air Combat Command, Major General Jerry Harris, told the House Armed Services Committee (HASC) on February 16: “Additional F-35As would be delivered in the current configuration and will have to go through an extensive retrofit programme once the upcoming Block 4 upgrade and software is ready. There are currently 108 US Air Force F-35As waiting for retrofit.”

A Block 4 F-35A will have greater capabilities. However, Congress likes to see more aircraft built, so may be more inclined to increase production, even if this means more money will be required to be spent on them in the future.

Other US Air Force leaders want any additional funds to pay for more people rather than more aircraft. General Goldfein said: “The state of our Air Force, in terms of readiness, is that we’ve got serious challenges.”

Commenting on priorities, in January Goldfein said he would rather have more personnel than aircraft, some 25,000-30,000 to meet current shortages and increase capabilities for flight line maintenance, cyber warfare and space operations. On February 23, Goldfein said the Air Force personnel strength is “the smallest we’ve ever been”.

Not everyone agrees. Commander of Air Combat Command, General Hawk Carlisle wants deliveries of the long-delayed F-35As accelerated to 60 a year from the current level of 40 as soon as possible.

No one knows how much money and what resources will be available to sustain – let alone enhance – US airpower in the near future. Still to be determined is what the US Government is going to ask American airpower to do. The Trump administration may put in place policies or actions that will quickly hoover up any additional funding.

The administration’s rhetoric suggests other areas where more may be asked and hence more airpower resources expended. The conflict in Somalia may require additional US airpower involvement, where currently it is limited to a relatively few aircraft from Special Operations Command. The situation in Afghanistan, with new Taliban attacks expected in the spring, may call for US aircraft with a range of missions: close air support, casualty evacuation and air transport. US and NATO missions in Iraq are unlikely to end once the Iraqi Government regains control of Mosul. The new administration’s often repeated concern about border security suggests this is an area where more resources may have to be allocated. Dunford said: “[There is] a full range of options on the table for US actions in the conflict in Syria and Iraq.” Trump’s administration ordered a 30-day review of the conflict in January. As the administration said in initiating the review, the result may, accelerate US involvement. If this is the case, it is likely to mean more aircraft, more munitions, more resources and more funding will have to be allocated to combat.

On January 27, the president signed an executive order for a Nuclear Posture Review of the priorities Trump’s administration inherited from his predecessor. Under the Obama administration, it appeared the need to modernise nuclear deterrent forces would be a priority for research and development (R&D) and procurement funding in future years. Obama left office before the bills for the expensive parts of the requirement became due. Donald Trump’s statement, during a press interview on February 24, that he means to ensure US strategic forces remain “top of the pack” suggest this will remain one of his top concerns. If this is the case, it may be allocated additional funding.

Where will the resources required for such emerging priorities come from? R&D may become a bill-payer. On February 7, US Air Force Vice Chief of Staff General Stephen Wilson told the HASC: “Right now, our R&D is about two percent [of total defence spending]. We need to keep it at that [level] or even grow that because otherwise, our adversaries will outpace us.”

If the government cuts back R&D, its potential high-end competitors are unlikely to do so. Speaking in Washington DC on February 17, Senator McCain said: “For 20 years, our adversaries have gone to school on the American way of war. We can no longer take victory for granted. America could lose the next war we fight.”