Chief Executive Officer of the Ilyushin Aviation Complex Aleksey Rogozin posted an announcement on his Facebook page that the company had launched a new medium transport aircraft programme designated the Il-276.

Rogozin said the programme, launched on June 1, 2017 would be developed in the best tradition of the Ilyushin Design Bureau and use the latest technologies.

Although the Il-276 has much in common with the Russian-Indian Il-214 Multirole Transport Aircraft (MTA project, Rogozin emphasised it is a different aircraft with different technical requirements.

The Il-276 specification released is very similar to the last iteration of the MTA. It is likely that some requirements in the MTA project were there at the request of India, including the capability to operate from airstrips located at altitudes of 11,500ft (3,500m) above sea level in temperatures of 40°C, capabilities not required by the Russian Air Force. The MTA was launched in March 1999 with the signing of protocol of intent to create a joint venture between Ilyushin and Hindustan Aeronautics Limited for the development and production of the MTA based on Ilyushin’s pilot Il-214 project.

On October 12, 2012, the parties signed a preliminary design contract, but work proceeded slowly. In 2015, India finally withdrew from the project, reportedly dissatisfied with the aircraft’s characteristics and Russian demands for more funding. In September 2015, the Russian Ministry of Defence ordered Ilyushin to adapt the MTA design to the requirements of the Russian Sredniy Voyenno-Transportnyi Samolyot (SVTS or Medium Military Transport Aircraft) programme. Funding previously planned for the MTA programme was to be reassigned to the SVTS project. According to Igor Bevzyuk, Ilyushin’s Il-276 programme head, the Russian Ministry of Defence was expected to approve the final requirements for the SVTS in December 2017, after which a contract for the design and manufacture of a prototype was to be signed.

The Il-276 has a moderately swept high-mounted wing, a T-shaped tail, rear loading ramp and low undercarriage carried in nacelles on the fuselage sides. Payload options include 20,000kg (44,092lb) of cargo or 100 troops, or two personnel carriers. Initially, the aircraft will be powered by two Aviadvigatel PS- 90A76 turbofans, each rated at 156.9kN (35,274lb) of thrust, the same engine used by the Il-76MD-90A. New-generation Aviadvigatel PD- 14 turbofans, developed for MC-21 airliner will be integrated at a later date.

Russia’s requirement for the Il-276 is to replace An-12 medium transports, around 60 of which remain in Russian military service. On the international market, the Il-276 will compete with the Lockheed Martin C-130J, Embraer KC-390 and Antonov’s Il- 178. According to Bevzyuk, the Il-276 prototype is expected to perform its maiden flight in the first quarter of 2023, and deliveries will start in 2026. Ilyushin is planning to produce the Il- 276 at Ulyanovsk, alongside the Il-76 and Il-78. 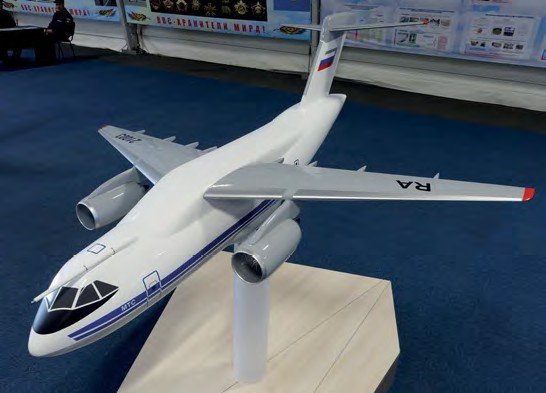 A model of the Ilyushin Il-276 transport aircra