F-35B Lightning II ZM148 (c/n BK-14) on the flight line at Marine Corps Air Station Beaufort, South Carolina on December 14, 2017. The aircraft, the final one to be delivered to the UK contingent at Beaufort, is shown after it’s delivery flight from Lockheed Martin’s plant at Fort Worth.
Corporal Benjamin McDonald/US Marine Corps

“YOU INVENTED the airplane. We invented the air force”, Air Vice Marshal Gavin Parker, Chief of the British Defence staff in Washington, told an American audience there on April 15, 2018 as part of the RAF’s centennial celebrations. Few countries are home to celebrations to commemorate foreign armed forces. That there was one in Washington DC shows the continued importance of the Anglo-American airpower relationship.

Military aviation has been an Anglo-American story ever since an American, Colonel Sam Cody, flew the first aircraft in Britain in 1908. In April 2018, news reports that RAF Tornado GR4 strike aircraft based at RAF Akrotiri, Cyprus had joined in the US-led airstrikes on Syrian chemical weapons targets underlined that, in their 100-year plus shared history, the bonds between US and British airpower and aviation have never been stronger.

“Trenchard said the air is one and indivisible”, Air Vice Marshal Parker said, invoking Sir Hugh Trenchard, a founder of the RAF and airpower in general, something no British airman does lightly. While it “does help when you are both in an air force”, Parker said, the current Anglo- American airpower relationship is not limited to those wearing the air force blue uniforms.

The RAF’s resurgent maritime patrol capability has close links with the US Navy, buying the same Boeing P-8A Poseidon maritime surveillance aircraft. Operation Seedcorn allowed the RAF to keep its cadre of specialist maritime personnel flying and working with the US Navy, and other partner air arms through the years when there were no British maritime reconnaissance aircraft outside of museums.

Decades of operations with the original Hawker Harrier and its descendants brought together the Royal Navy, the RAF and the US Marine Corps. This relationship will carry on now that the two UK service and the Marine Corps operate the Lockheed Martin F-35B Lightning II. In the future, some of the first F-35Bs to fly from the flight deck of Britain’s new aircraft carrier HMS Queen Elizabeth (R08) will be US Marine Corps aircraft.

Other commonality between the US and the UK’s armed services are use of the AH-64 Apache attack helicopter by both the US and British Armies, and the need for air observation during World War Two. More recently other airpower innovations – the rise in the use of unmanned air vehicles (MQ-9 Reaper), capabilities used for intelligence, surveillance and reconnaissance gathering (E-3 AWACS and RC- 135 Rivet Joint) and networked operations – are all shared between both countries. The aerospace and defence industries in both nations increasingly cooperate, sharing participation in aircraft programs, and intertwined global supply and sustainment networks. Some 15% of each and every F-35 Lightning II aircraft is built in the UK. The Brits will also have a major role in the F-35’s sustainment over the decades of its service life, because the UK is the programme’s only tier one international partner nation. Britain’s capability in research, development, testing and evaluation, second only to the United States among NATO members, played a major role in the F-35 programme. The level of British expertise and input to the F-35B Short Take-off and Vertical Landing variant is significant; some involved with the programme credit the UK’s input to the F-35B as the key component for getting the fifthgeneration jump jet to function as a STOVL-capable fighter. 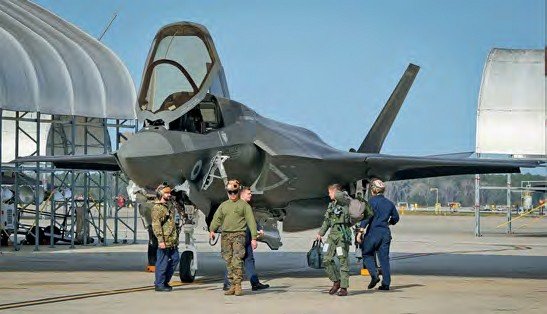 “Coalitions often come together in the air first”, said US Air Force Chief of staff , General David Goldfein during the RAF centennial commemoration in Washington on April 16. The links originally forged in the air during two world wars are today an integral part of the overall Anglo-American special relationship. Today, US and British military aviation are not only buying the same aircraft and fighting in the same conflicts but are also having to look ahead to future challenges.

Britain has committed substantial resources to the Anglo- American airpower relationship. Parker said of the nearly 1,200 British military personnel in the United States, “ten times as many as any other European country,” 700 were serving members of the RAF. Three squadrons are currently operating in the United States, including No.617 Squadron ‘The Dambusters’, re-formed at a ceremony in Washington on April 17 while preparing to fly its F-35Bs home to the UK from Marine Corps Air Station, Beaufort South Carolina. No.617 Squadron is the first operational UK F-35 squadron, albeit one manned by both Royal Navy and RAF personnel. The RAF’s force of RC-135 Rivet Joint signals intelligence aircraft, dubbed Air Seeker by the Brits, are “pretty much seamlessly integrated to global operations,” Parker said.

At the April 16 commemoration, Chief of Air staff , Air Chief Marshal Sir Stephen Hillier, described the relationship between the US and British militaries as being “absolutely vital” to the Royal Air Force, enabling “common operation of equipment. It is very effective at the acquisition level; there are effciencies. In working together in operations, that’s where we have the decisive advantage. The US Air Force and the RAF, operating alongside each other, is absolutely powerful”.

Hillier stressed the importance of the relationship to his service. “The depth and breadth of capability that the RAF has working alongside the US, and the knowledge and experience they bring to our joint capability, is absolutely fundamental to everything we do”. A point that’s highlighted by the dependency of US Air Force tankers to air refuel RAF RC-135s when needed, and in the future RAF P-8A Poseidon maritime surveillance aircraft. Nor is the value of the relationship one-way only. At the same event, Group Captain Stephen Richards, Assistant Air Attaché in Washington, pointed out that, operationally, over the decades, British airpower has contributed to US conflicts even where aircraft with roundels on their wings were not committed to combat, “not so much doing something special but helping. Holding the fort, providing complementary capabilities”.

The RAF centennial marked a high point in the relationship, which Parker described as being “as closely aligned as it has ever been in its history”. Together, both countries have to adapt to a future that is going to be marked by proficient peer competitors and disruptive new technologies. Hillier pointed out that future British contributions will not necessarily be limited to its aerospace and defence industries. He said: “Our [US and British] overall requirements are the same, as are, overall, our industrial sectors. We can exploit commercial technology to a greater extent than we have in the past. We both have to rely on commercial technology exploitation and bring that into the way we do business. The technology is there. How do we adapt as organizations to exploit it?”

There are challenges for continuing today’s Anglo- American airpower relationship into the future. Hillier said: “There are always challenges. Resources are always an issue”.

Demographic and political changes are affceting the larger Anglo-American relationship, a situation that provides the context for, and the enabler of, airpower cooperation. Those that fought World War Two together are largely gone. Those that operated together through the Cold War are retired. Competing claims on limited resources, dissatisfaction with the status quo and distrust of institutions – especially multinational ones – have made an impact at the ballot box in both countries.

The century-plus long story of Anglo-American airpower is about more than aircraft, operations and doctrine. It is about people that have been shaped by the links between the two countries that they helped create for over a century and go much broader and deeper. Many years ago, the author arrived, early, for a meeting at a government off ce in Washington DC. Talking with the young US Air Force off cer who would be chairing that meeting, I found out her grandfather had, in the Great War, been in the Royal Flying Corps and Royal Air Force, as had my own. Today, Dr Heather Wilson is Secretary of the Air Force.

Hillier characterized Anglo- American airpower as having “solid foundations based on shared histories, a relationship which is daily – hourly – reinforced by what we do on operations around the world. We should go further.

We should never accept what we do today will be good enough in the future. In July 2016, when I met with General Goldfein, we had that discussion: we do great work together, but where should it be in the future? In July 2017, we signed a joint declaration of how we would like relations to develop in the future. It is not radical change, because it is such a solid base. In 20-30 years, we will be able to work together as solidly as we have in the past. That is the enduring strength of our relationship”.

That the two service chiefs came together to mark the RAF’s centennial shows their shared awareness that their airpower is a transatlantic hybrid, one that has proven rugged and adaptable in war and peace alike.