Another Spitfire for Duxford

Spitfire IXT PT462/G-CTIX leaving Duxford after one of its previous visits for maintenance. It has now taken up residence.
BEN DUNNELL

On 9 October the Aircraft Restoration Company (ARC) announced the acquisition of Supermarine Spitfire IXT PT462/G-CTIX from Anthony Hodgson, who had owned the two-seater since 1998 and kept the distinctively liveried machine at his private airstrip near Towyn, North Wales. The Spitfire is already in familiar surroundings at Duxford, having made yearly visits to the Cambridgeshire airfield for maintenance with ARC.

After being recovered from a rubbish dump on a kibbutz at Kfar-Gaza in 1983 by warbird collector Robs Lamplough, the Castle Bromwich-built HFIXe was acquired by property developer Charles Church. It was then rebuilt under the leadership of former Battle of Britain Memorial Flight/ Warbirds of Great Britain chief engineer Dick Melton to create what he considered to be the most refined Spitfire of all, incorporating technical features which, from his vast experience on the type, he had worked out to be the best combination available to give optimum handling and operating features. Leadingedge ‘wet’ wing tanks, originally seen on the Spitfire PRXI, were installed, giving the aeroplane a much longer range than other restored Spitfires, and short-span ailerons, a feature of the MkVIII and MkXIV variants, were fitted. The fuselage was rebuilt by Melton and his team at the Charles Church (Spitfires) workshop at Micheldever, Hampshire into the same two-seat configuration that Dick and Nick Grace had fashioned for Spitfire ML407, with a more streamlined rear canopy than the original two-seaters.

The aircraft made its first flight on 25 July 1987, and appeared at several events before the tragic loss of Charles Church in Spitfire V ‘EE606’/G-MKVC on 1 July 1989. In 1994 it was shipped to Bartow, Florida for new owners Jet Cap Aviation. It came back to the UK in February 1998 and was reassembled by ARC at Duxford, taking up its previous registration, G-CTIX, once again before heading off to Wales.

PT462 flew with No 4 Force from Bellaria on the November 1944, going on to be operated by No 253 Squadron, RAF on sweeps over Yugoslavia during April 1945, wearing the codes SW-A. It was transferred to the Italian Air Force in June 1947, moving on to the Israeli at Tel Nof air base along with the other 15 surviving Israeli Spitfires in March 1956, it was donated to the Kfar-Gaza kibbutz for use in the children’s playground. 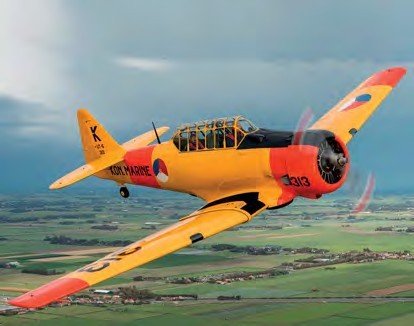 Just over a year after it was imported from Sweden, the Wings over Holland North American T-6 Texan, PH-TXN, flew again at Lelystad just in time to appear at the Royal Netherlands Navy air arm (Marine Luchtvaartdienst, MLD) 100th anniversary event at the Heldair Show Maritiem event held at Den Helder Airport in the northern Netherlands on 16 September. Wings over Holland owner Luuk van Hooijdonk and his team worked day and night to get the aircraft completed in a yellow and dayglo Royal Netherlands Navy scheme. It now represents serial 313, a former Royal Netherlands Air Force Noorduyn AT-16D that was operated by the MLD between 1965-71.