The formal introduction ceremony included a fly-by of the IAF’s latest attack helicopter. Eight aircraft are now in India: four were delivered to Hindon on July 27 and four more followed on August 7; all eight are now at Pathankot. 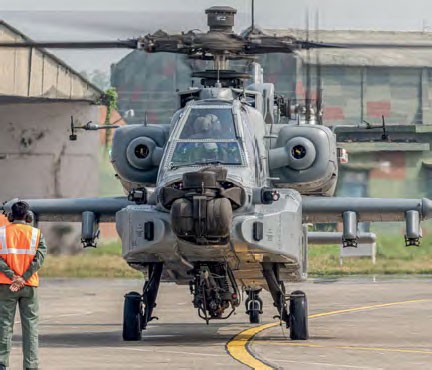 The ‘business end’ of the AH-64E(I) with a good view of the large black MAWS sensors protruding from either side of the nose.

Indian Air Force AH-64E(I) ZV4802 basks in the sun at Pathankot Air Force Station. The Apache Block III was selected in favour of the Russian Mi-28N to meet an initial requirement for 22 attack helicopters.
All photos Angad Singh

The Indian Air Force (IAF) formally inducted the AH-64E(I) Apache into service with No 125 Helicopter Squadron (HS) ‘Gladiators’ at Pathankot Air Force Station, part of the Western Air Command, on September 3. The first of 22 Apaches on order for the air arm had been handed over to Air Marshal A S Butola, the most senior IAF helicopter pilot, during a ceremony on May 10 at Boeing’s production facility in Mesa, Arizona. They were then airlifted by Antonov Airlines An-124s to Hindon AFS near New Delhi in July, where they were assembled, and test flown, before ferrying to their eventual home base the following month.