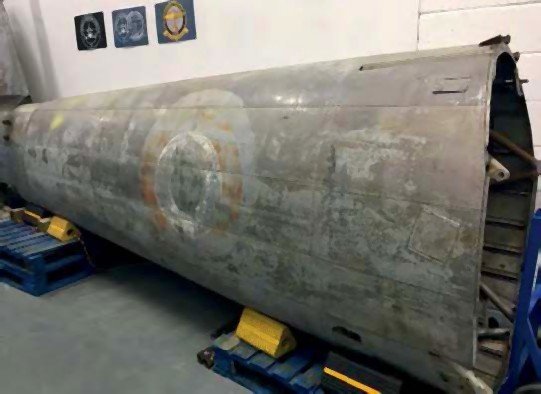 The rear fuselage of an ex-Indian Air Force Hawker Tempest II has been acquired for the rebuild effort, and is pictured at the Typhoon project’s supporters’ day at its premises at Uckield on 28 October. This section is identical to that used on the Typhoon, of which RB396 will be the sole airworthy specimen, and only the second complete survivor after the RAF Museum’s static example. TONY HARMSWORTH

On 28 October the Hawker Typhoon Preservation Group announced that the Aircraft Restoration Company (ARC) at Duxford has been designated to provide the engineering support and oversight for the rebuild of Typhoon Ib RB396 to lying condition. The two will work together under the oversight and guidance of ARC boss John Romain.

Project trustee Sam Worthington-Leese says, “It is planned to also include the expertise and services of a number of other restoration irms/establishments including Airframe Assemblies, Air Leasing, and others still to be announced, all under the collective umbrella of ARC, making the rebuild of RB396 a real team effort.”

During mid-October a fundraising drive raised £20,000 in less than a week.

Sam explains, “The money is to be used to purchase the use of a full set of jigs required for the rebuild of RB396, along with a large selection of Typhoon and Tempest parts, thus saving some £150,000 when compared to having to build them ourselves. We would like to thank the members of the Supporters’ Club for their generosity to date, for without them the progress would not have been what it is.”