Argentine Etendards, resources and a centenary

AFTER MONTHS of speculation, French President Emmanuel Macon announced on January 26 that France would sell five Super Etendard Modernisé (SEM) to Argentina. According to different press outlets, the contract is worth €14 million and includes five aircraft (No 1, 31, 41, 44 and 51), ten Atar 8K50 engines and a range of spare parts. The French SEM was retired from active duty on July 12, 2016, and has been in operational storage at the Élément Air Rattaché 279 (EAR 279) Châteaudun ever since. The aircraft sold to Argentina are all SEM Mark 5s, which first entered service in 2006.

Commandement des Opérations Spéciales (Commander of the French Special Operations Command or COS) Admiral Laurent Isnard appeared before the French National Assembly’s Committee on National Defence and Armed Forces on December 19, 2017, to discuss the Defence Programming Act 2014– 2019, and the 2018 Defence Budget Act. Isnard gave an assessment of the current state of the Special Forces organisation and discussed the need to increase the number of NH90 helicopters for the 4e Régiment d’Hélicoptères des Forces Spéciales (4th Special Operations Helicopter Regiment), to modernise equipment and to acquire Medium Altitude Medium Endurance (MAMA) drones. More specifically, Isnard asked for new NH90 helicopters that would be outfitted for Special Forces operations. According to the Admiral, the development of this new NH90 variant could potentially be cofinanced with other European NH90 customers, as well as Australia or New Zealand. Isnard pointed out that the 4th RHFS is currently operating three types of tactical helicopters: AS330b Puma, AS532UL Cougar and EC725 Caracal. Acquiring the fourth-generation NH90 helicopters for the 4th RHFS would allow the unit to replace the older AS330b and AS532UL, which will be outfitted with the latest technology needed for Special Forces operations. The NH90 would therefore be the perfect platform to operate alongside the modernised Tigre HAD (Hélicoptère Appui Destruction). Furthermore, this would result in two harmonised fleets. The EC725 will be transferred to Escadron de Hélicoptère (EH 1/67) at BA120 Cazaux and 4th RHFS will operate the NH90 at Pau.

Consequently, there would be a drop in maintenance costs for the Armée de l’Air and the Aviation Légère de l’Armée de Terre (ALAT) and ALAT aircrew would need fewer type ratings, optimising the training of aircrew within the 4th RHFS.

Regarding the ongoing modernisation of equipment, several topics were discussed, such as the Tigre HAD, modernisation of the 14 C-130 Hercules serving with the Armée de l’Air of which seven will receive enhanced tactical capabilities, and the planned armament and signals intelligence (SIGINT) capabilities for the MQ-9 Reapers. Finally, the Admiral talked about the use of drones by Special Forces. He outlined the importance of being more involved in the Armée de l’Air MQ-9 Reaper programme. He requested consideration of the possibility for the COS to acquire off-the-shelf MAMA drones – with a range of approximately 100km (54 nautical miles) and an autonomy of six hours – for use by small Special Forces teams on the ground. These drones should have SIGINT capabilities and should also be able to carry small payloads.

The presentation also revealed a few interesting facts. First, after a work-up of three years, EH 1/67 has now reached full operational capability as a Special Forces unit. According to Isnard, EH 1/67 has seven crews and two helicopters ready to deploy anywhere at very short notice for an undetermined time. This milestone was celebrated during a ceremony at BA120 Cazaux on January 31.

Furthermore, Isnard stated he does not need an aerial refuelling capability for all the Special Forces helicopters, as this would require more training and a potential capacity problem in terms of tanker aircraft availability. The Armée de l’Air received its first C-130J in late December, but the first (of two) KC-130Js will only be delivered next year. Although the A400M should be able to refuel helicopters in the next few years, Airbus has not yet found a solution for the type’s wake turbulence problems when aerial refuelling helicopters.

In the meantime, the French are dependent on American and Italian Hercules for aerial refuelling of their Caracal helicopters. The Admiral also gave some insights as to the activities of the Special Forces helicopter fleet: 25% are currently deployed for ongoing operations, whereas 25% are in maintenance, leaving 50% of the fleet at their home bases. However, the priority of repairs and maintenance has an impact on flying back in France, as spare parts are sent to deployed aircraft as a priority. 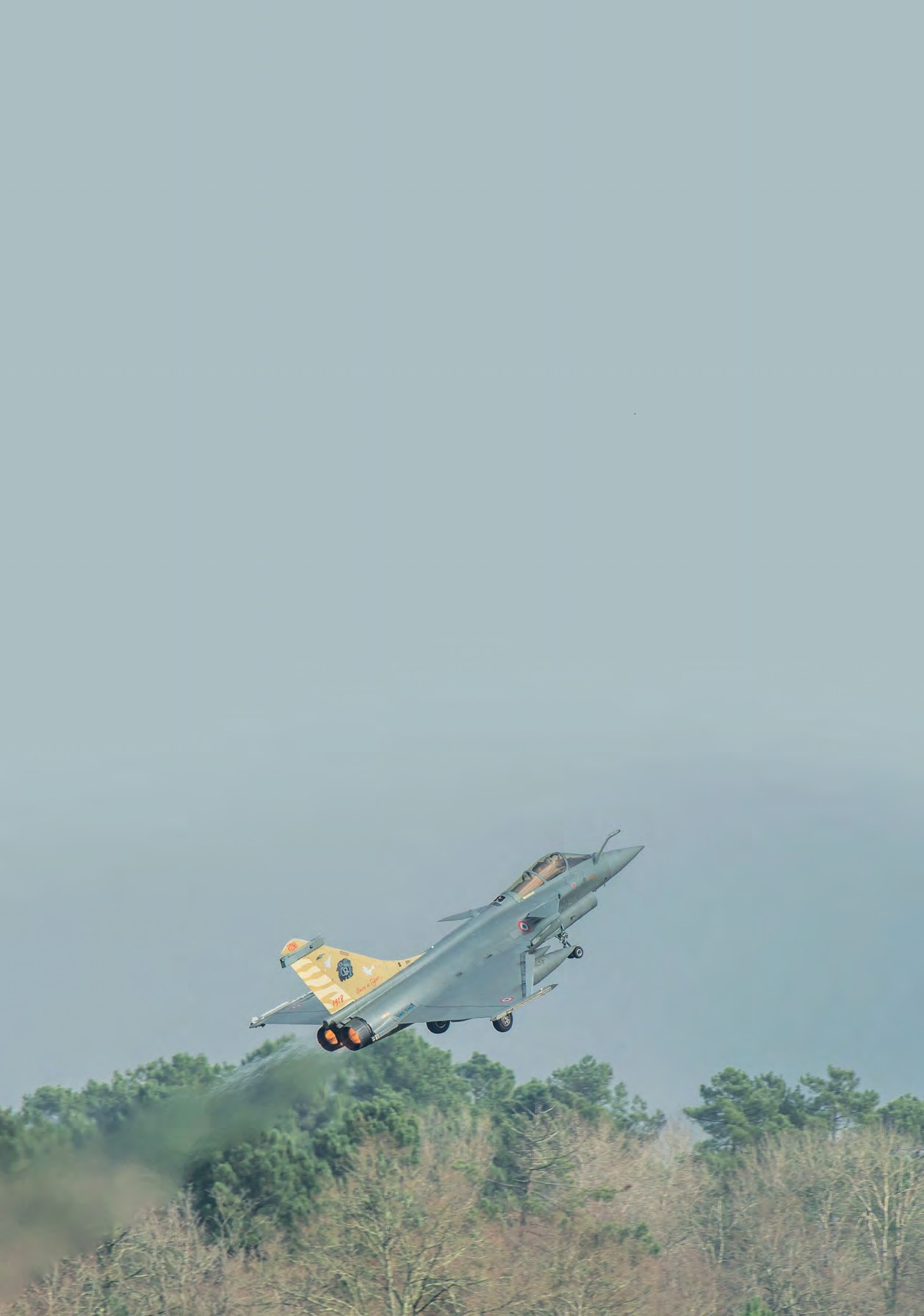 Rafale C 128 received a special tail for the SPA 162 centenary. The right side carried SPA 162’s original insignia with the legend ‘1918 Once a tiger’. All photos Jan Kraak 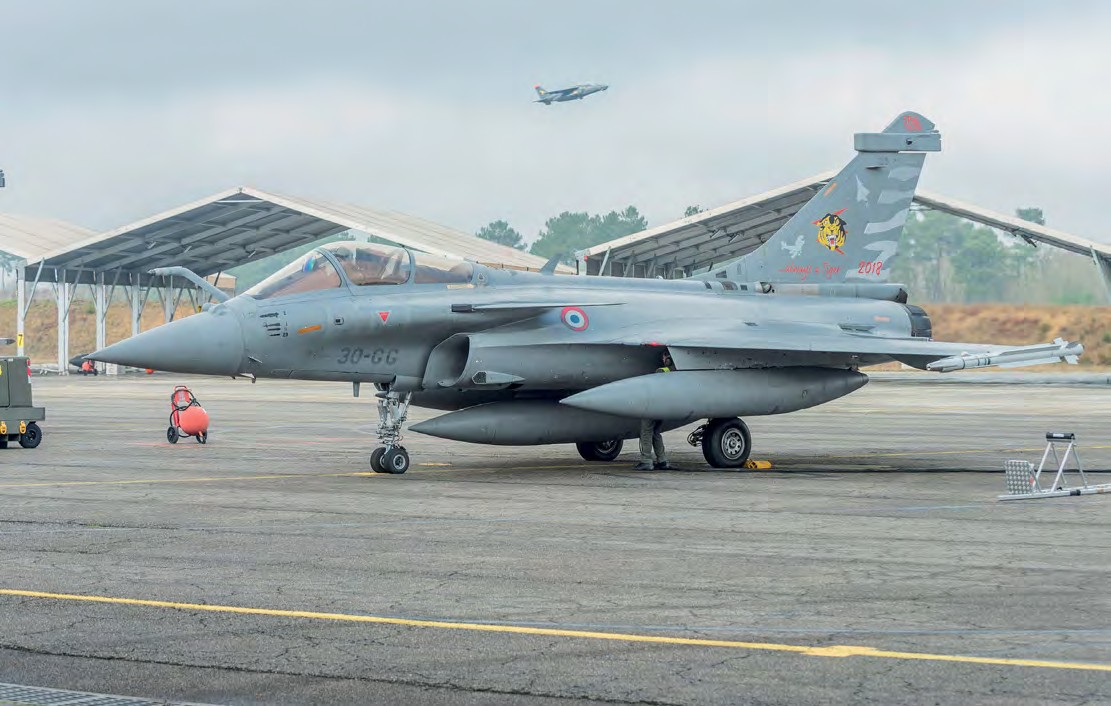 The other side of the tail shows the current insignia plus the legend ‘2018 Always a tiger’.

Finally, Isnard stated that half of Special Forces pilots’ flying hours are carried out during deployments. Combined with the maintenance issues, the low number of available flying hours at their home base has an impact on what pilots can train for when not deployed. According to Isnard, this impact is felt most regarding the missions and operations that cannot be planned well in advance.

On February 2, the ALAT lost five experienced pilots and two Gazelle helicopters in an accident in the south of France, approximately 70km (38 nautical miles) from Saint-Tropez. The helicopters and three of the pilots were assigned to the Aviation Légère de l’Armée de Terre (ALAT) flying school at Cannet des Maures, whereas the two other pilots were from the 4th RHFS. Although initial reports in the French press suggested trainee pilots were involved, all pilots were experienced, varying between 900 and 5,400 flying hours. The exact cause of the crash is not yet known, but investigators are assuming the helicopters came in contact during training manoeuvres. This is the third ALAT Gazelle written off since the start of the New Year.

On January 9, the 43e Bataillon d’Infanterie de Marine, part of the French armed forces permanently based in the Ivory Coast, lost one of its two Gazelles near the town of N’Gokro. The crew was reported to have hit a power line shortly before crash-landing into a river.

Many people will not immediately recognise the name SPA 162, but they may be familiar with Armée de l’Air tiger squadron traditions. First activated on January 28, 1918, SPA 162 ‘Tigre’ became part of EC 1/12 ‘Cambrésis’ in 1955. This famous Armée de l’Air air defence squadron was one of the three founding members of the NATO Tiger Association. EC 1/12 operated the Mirage F1C from BA103 Cambrai between 1977 and 1992 when the type was replaced with the Mirage 2000 RDI. The traditions of SPA 162 were transferred to EC 1/7 ‘Provence’ and its Rafale at BA113 Saint-Dizier following deactivation of EC 1/12 in 2011. Five years later, EC 1/7 was transferred to BA104 Al Dhafra Air Base in the United Arab Emirates. However, SPA 162 did not move with EC 1/7. Instead its traditions were transferred to EC 3/30 ‘Lorraine’ at BA118 Mont-de-Marsan. A ceremony to mark the centenary took place on February 2 in the presence of an international delegation: two Force Aérienne Belge F-16s from the 31st Smaldeel/10th Wing, a Luftwaffe Tornado ECR from Taktisches Luftwaffengeschwader 51, two Aeronautica Militaire Italiana F-2000 Eurofighters from 12 Gruppo, two Ejército del Aire F/A-18 Hornets from Ala 15, and two Eurofighters from Ala 14. 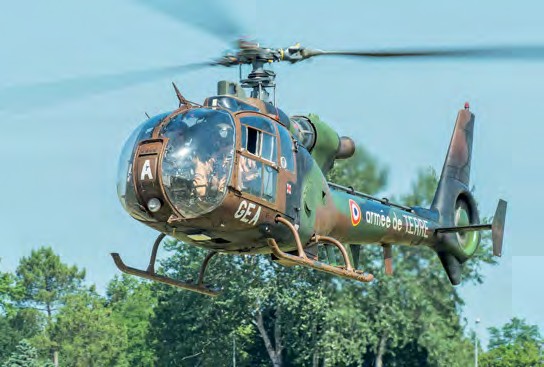