In support of its aim to return a de Havilland DH.98 to UK skies, The People’s Mosquito is both proud and delighted to announce its new patron, respected aviator and popular broadcaster Arthur Williams.

Arthur has become synonymous with the story of Mosquito restoration and its vital war winning role, ever since his documentary The Plane that Saved Britain, first aired. Since then, his career as a broadcaster and presenter has reached new heights, most recently with the phenomenally successful Channel 4 series, Flying Around Britain. 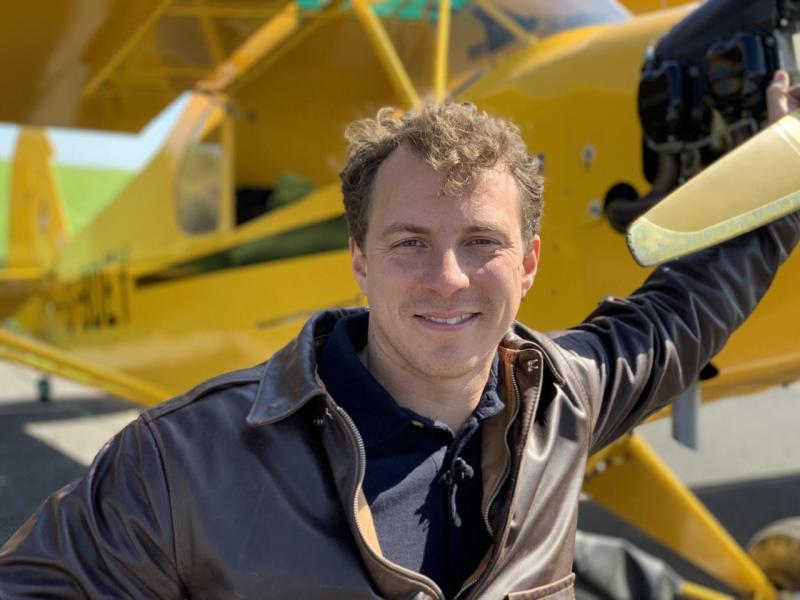 “Arthur has been a keen supporter of our project for some time now, and has always offered support whenever required. We were delighted when he accepted our invitation to join the TPM family as patron,” said John Lilley, Managing Director of The People’s Mosquito.

Overcoming obstacles has become something of a habit for Arthur having graduated from Commando Training Centre Royal Marines in 2004. A long rehabilitation followed a serious car accident in 2007 but, having overcome huge personal challenges, an association with the charity Aerobility allowed Arthur to fulfil a long-held ambition to learn to fly.

Arthur’s love of sport, in particular wheelchair racing, was to open an entirely new chapter in his career when he joined Channel 4’s presentation team providing coverage of the London 2012 Paralympics. Since that point, he has emerged as one of the most recognisable and popular aviation presenters in the UK and is often seen at the controls of his stunning 1943 Piper Cub. Most recently, Arthur completed his debut season working as guest commentator for The Blades aerobatics team as they thrilled an estimated three million spectators in the 2019 display season.

“I’ve always loved the ‘Mossie’,” said Arthur. “During a 2013 Christmas party with Channel 4 I was talking with the then commissioning editor for specialist factual, waxing lyrical about the Mosquito. He had never heard of the aeroplane but commissioned a one-hour documentary - The Plane that Saved Britain - there and then.

“The journey that followed allowed me to explore some of the fascinating stories behind the aircraft, and the people who designed, built and flew her, culminating in travelling to the States and being the luckiest chap alive to have the opportunity to fly in her over Virginia Beach. It was a dream come true!”

Arthur continued: “I’m passionate about seeing a British Mossie grace our skies and airshow circuit once again. The effect that aeroplane had on me as a boy watching it display was awe-inspiring. We have to allow our future generations to enjoy the same privilege.”

Trustees of the charity thought long and hard about a suitable replacement for Capt Eric ‘Winkle’ Brown, The People’s Mosquito’s original patron who sadly passed away just over four years ago.

“Arthur’s passion for the Mossie is well known. What better person to help promote our restoration of RL249 and tell the story of this remarkable aircraft – an icon of British design that deserves to be returned to UK skies.” www.peoplesmosquito.org.uk