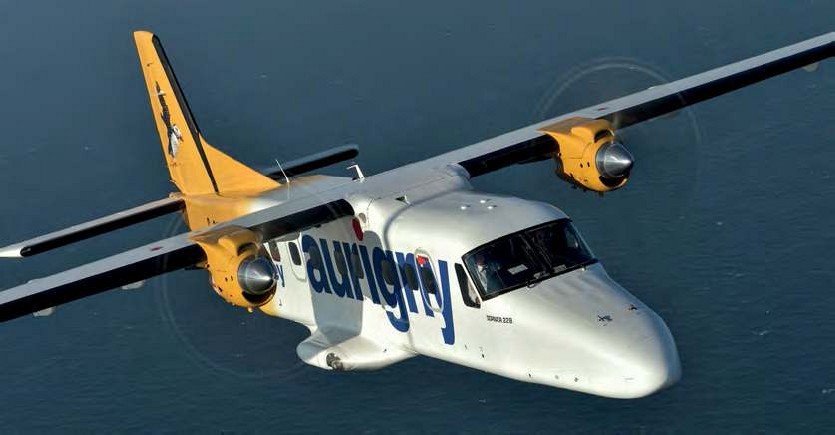 Aurigny has put its second Dornier 228 Next Generation into service. RUAG Aviation

Guernsey-based Aurigny is best known as an operator of the nowretired Britten-Norman Trislander and is tasked by the States of Guernsey and Alderney with providing passenger and cargo transport on the routes between Guernsey, Alderney and Southampton. Aurigny Chief Executive Oicer Mark Darby described the two new Do 228NGs as, “an important investment in our Alderney operations and ensures we have a leet that can serve us well for years to come”. As well as the interisland lights and the Southampton route, the aircraft will also be used on a service to Dinard.

States of Alderney Chief Executive Oicer Andrew Muter said the “availability of reliable, modern aircraft with up-to-date technology is a real plus”. The Channel Islands are frequently afected by sea fog, often at short notice. Aurigny must cope with the disruption this causes to the airline’s role of maintaining vital air links between the islands. The new Do 228NGs feature glass cockpit avionics, including a digital autopilot, which combined with the aircraft’s short take-of and landing capability and stable crosswind performance make the type suitable for its operations.

Aurigny is also investing in other new equipment to handle the operational challenges posed by the Channel Islands’ weather. Its three ATR 72-500s are to be replaced from next year by ATR 72-600 turboprops equipped with the ClearVision Enhanced Vision System, which uses an external camera to display an augmented outside view in real time to a head-mounted visor called SkyLens to improve a pilot’s vision signiicantly. ATR says a study had shown Aurigny had been forced to abandon 48 landings at Guernsey in a year due to fog and ClearVision could have saved 50% of those landings.