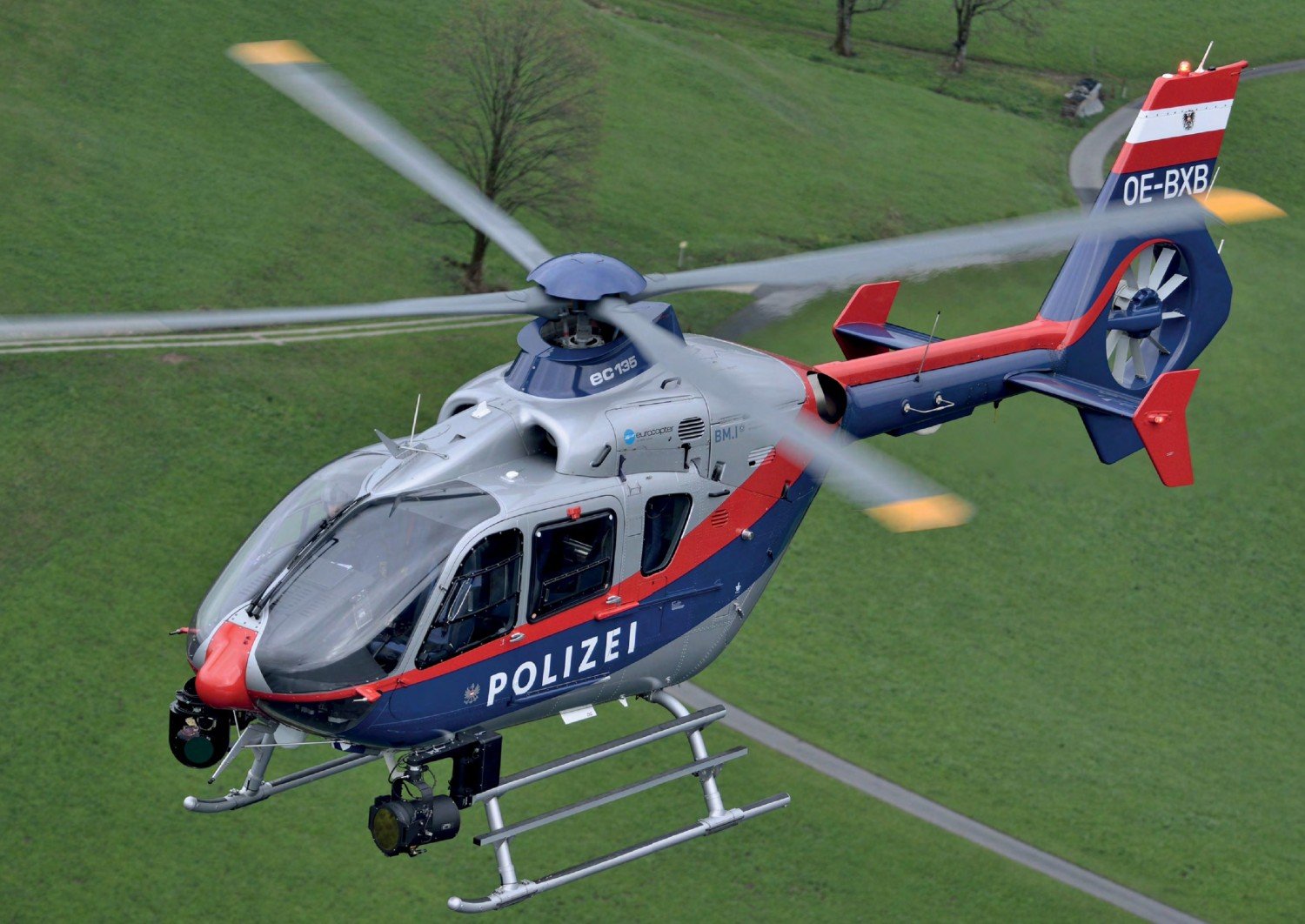 It is 10:00. A red, white and blue coloured Airbus Helicopters EC135P2+ – callsign Police Alpha – takes off from one of the vast aprons of Vienna-Schwechat International Airport in Austria.

This camera-equipped helicopter, belonging to the Austrian Flugpolizei (Police Aviation Unit), will scan the outer boundary of the airfield well in advance of the arrival of the passenger flight from Tel Aviv in Israel. All activity of possible ‘bad guys’ will be checked and, if needed, information relayed to Polizei ground forces until the flight disembarks its passengers at the airbridge.

In anticipation of the return flight to Israel, the EC135 is sent to the suburb of Klosterneuburg to assist the Austrian Armed Forces bomb disposal squads in clearing an American World War Two bomb. The helicopter enforces a ground safety zone from overhead.

The bomb was successfully defused within an hour, before the EC135 is used to check nearby roads and parking areas for possible human traffickers, dubbed schleppers, ‘helping’ refugees westbound through the Balkans. These tasks completed, the helicopter heads back to Schwechat to monitor the departure of the outbound commercial flight to Tel Aviv.

This ‘all in one’ mission clearly illustrates the core business of the Flugpolizei, the part they play in the Republic of Austria’s Bundesministerium für Inneres (Ministry of Interior) police forces and the roles of surveillance and support to the country’s Blaulicht Organisationen (public security forces) during policing and anti-terror operations.

Created in the mid-1950s in response to an urgent need for air support of civil and police rescue forces in the aftermath of vast avalanches in Austria’s Tirol-region, the Austrian Flugpolizei was initially equipped with one Piper PA-18 Super Cub. It gradually became a modern and highly capable police aviation force, flying a sizeable fleet of helicopters. Today the Flugpolizei operates from seven Flugzeinsatzstellen (forward operating bases, also known as FESTs), located around the country to assist police ground forces where needed. 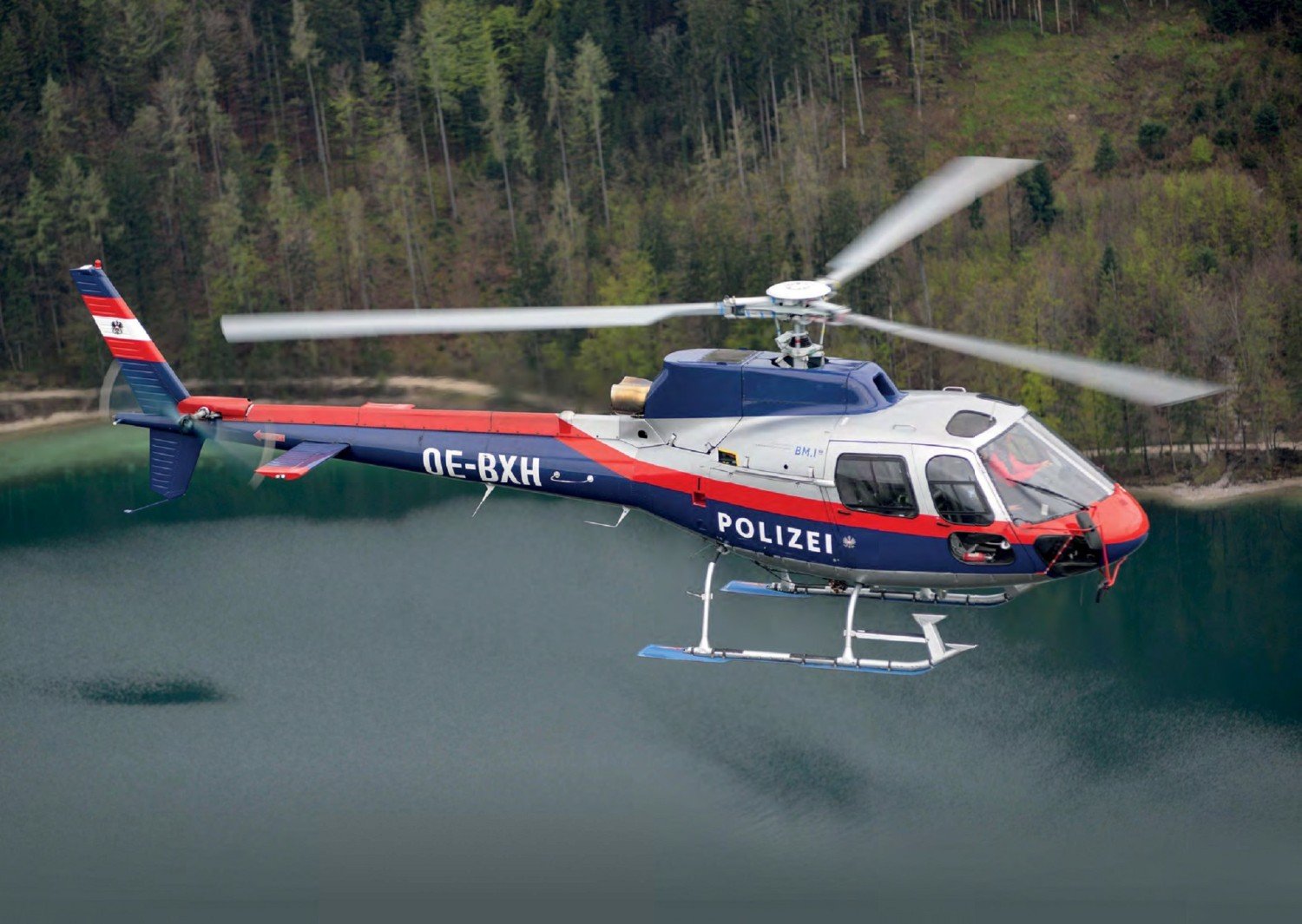 One of four Flugpolizei AS350B1s. The type’s high-altitude capabilities means these helicopters are assigned to units operating in mountainous regions.

The geographical diversity of Austria, ranging from easily accessibleflatlands in the north (Niederösterreich) to high Alpine territory in the Tirol region in the west, the Grossglockner, with peaks up to 12,467ft (3,800m), has led to the creation of a multirole helicopter force. For decades, Austria’s central European location made the country a highlytravelled crossroads for the import and export of goods and people to, and from, western and southeast Europe. Countless trucksflood the country’s well-maintained and easy-to-navigate road network. From 2015, large numbers of refugees, ‘assisted’ by illegal human traffickers, transited through Austria on their way to Germany.

All these operational national challenges, and the recently increased terrorist threat all over Europe, are thrown at the Austrian police, public safety and security forces, and impact on the operational workload and challenges of the small but able Flugpolizei force.

The main tasks of the Flugpolizei are divided into support of Austria’s law enforcement services, search and rescue (SAR), support of local and regional authorities and organisations, and training of helicopter crews and personnel. The majority (around 70%) of missions areflown to support police missions: airport and border surveillance, traffic control, search for and pick-up of missing persons, firefighting and missions in support of ongoing criminal investigations.

The Flugpolizei has 16 helicopters in its inventory, with the aircraft operationally assigned to the various FESTs. Thefleet consists of four AS350B1s, two AS355F2s, two AS355N Ecureuils, one Bell 206B JetRanger III and seven EC135P2+ helicopters. In autumn 2016, the first factory-fresh AS350B3 Ecureuil entered operational service, replacing one of the AS355F2s whoseflying time had expired and was deemed financially unsound to be overhauled by Airbus Helicopters.

The allocation of the various helicopters to the individual FEST is dependent on the individual hot and high capabilities of the various helicopter types. With high-altitude capabilities, the AS350B variants are all assigned to units operating in mountainous regions, where they join an EC135P2+. The less-capable AS355s are all based at the lowaltitude FESTs of Wien-Meidling and Graz.

Being twin-engined, the AS355s can safely operate over large city areas (Vienna and Graz). Once the main workhorse of the Flugpolizei before its replacement from 1985 onwards by the various Ecureuil variants, the sole remaining Bell 206B JetRanger III is nowadays almost exclusively used for training of new pilots and occasional transport of personnel.

The Austrian Government has agreed to a joint Flugpolizei and Bundesministerium für Inneres masterplan to renew, rationalise and optimise its helicopterfleet before 2022. The plan will see the creation of a mixed EC135 and AS350 helicopter force: eight EC135P3s, four EC135P3s optimised for transportation of the police’s Einsatzkommando (EKO) Cobra anti-terror team, and six AS350B3 Ecureuil helicopters. The 2016-purchased of AS350B3, OE-BXL, was co-financed by Austria’s Bundesland Tirol, as a revised financing of the yearly operational costs of a Flugpolizei helicopter whileflying and paid for by the Tiroler Bundesland. 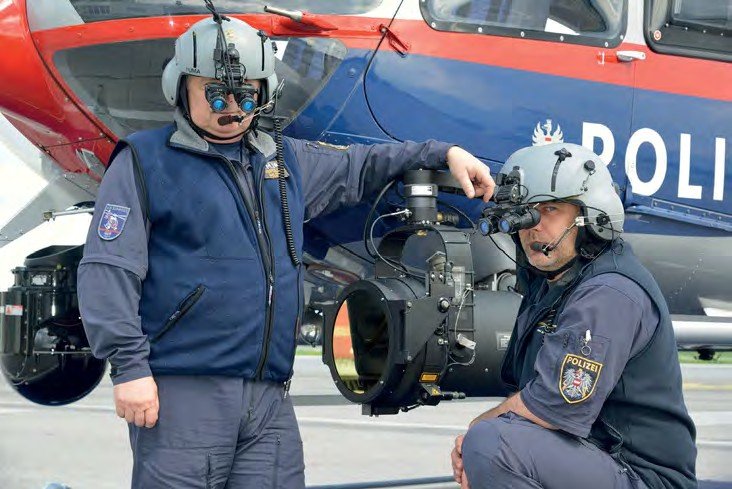 The quartet of EC135P2+ helicopters used for surveillance are equipped with Nightsun illumination and multispectral cameras, with the crew wearing night-vision goggles.

The various FESTs located throughout Austria differ in size and operational resources. Some of the smaller aviation units in Linz, Hohenems and Klagenfurt operate one EC135P2+ or AS350B out of their small but well-equipped hangars and ops Offices. The helicopter is held on standby from 07:00 until 21:00 (winter) and 07:00-23:00 (summer) crewed by a pilot in command and a rescue operator. All rescue operators are mountain rescue-qualified policemen, assigned two days a month on rotational basis to the FEST. On average, three pilots, working in one week rotations, and 13 rescue operators staff each of the smaller aviation units.

During police missions, the EC135 pilot uses two VHF and three tactical radios to communicate with police or firefighting forces on the ground and air traffic control (ATC). They use a callsign that combines ‘Police’ with the last digit of registration, to communicate with ATC and Libelle FEST in Linz for internal police communications. To assist the quick intervention of police or civil helicopter emergency medical services (HEMS) aircraft, all roads in Austria are marked by Dayglo-coloured distance indicators easily visible from the air.

The camera-equipped EC135P2+ helicopters are based at Vienna-Schwechat, Salzburg and Klagenfurt. A 24/7 standby is executed on weekly rotations by the Salzburg and Klagenfurt FEST, operating with one pilot and a camera operator. For night operations, a second pilot completes the standby crew, handling the various police and ATC radios. Due to the mountainous terrain in western and southern Austria, and the presence of a wide array of cables that are difficult to spot in the dark (even with night vision goggles), no landings are made during night interventions. 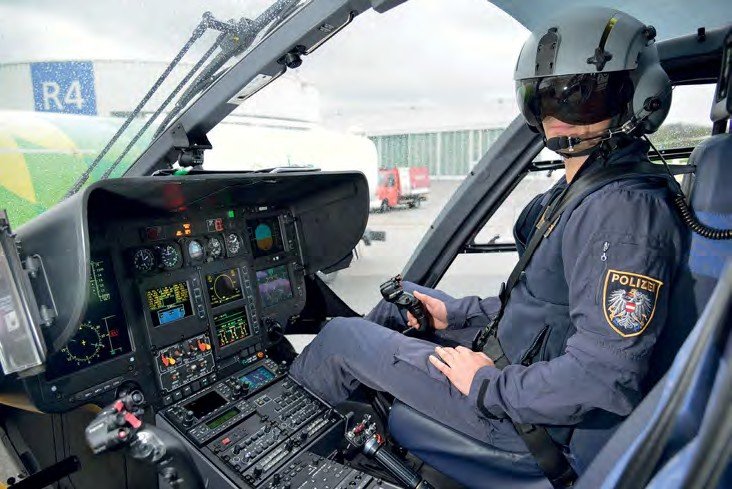 After receiving their wings, Flugpolizei pilots visit the various FESTs during a pilot apprentice phase before assignment as an operational pilot. 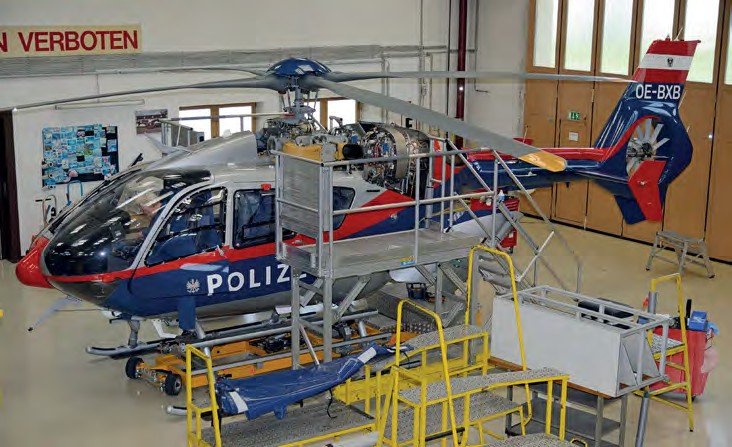 An EC135P2+ undergoing work at the unit’s Wartungsbetrieb (maintenance unit) at Meidling.

All year round, farmers on mountain slopes using temporary cables to retrieve wood and/or crops, need to file a hindernisreport (obstacle report) with details on the exact location of the cable, its length, height and date when it will be brought down.

The Vienna-Schwechat airport contingent, crewed by pilots and camera operators from the Wien-Meidling FEST, remains on 24/7 standby to cover airportrelated and local operations. At all times, one of the Flugpolizei-helicopters, usually an EC135P2+, is unavailable due to work at the unit’s Wartungsbetrieb (maintenance unit) at Meidling.

At the Klagenfurt and Salzburg FESTs, the camera-equipped EC135P2+s are joined by an AS350B1 Ecureuil, which are mainly equipped for SAR and mountain rescue missions. A full set of medical first-aid equipment is on board the Polizei helicopters at all times. AS350B1s all have a skid-mounted metal-cage to store additional safety and rescue equipment. When looking for missing persons hiking on the various mountains, the Flugpolizei is only allowed to retrieve uninjured or diseased people, to avoid overlap of the dedicated Österreichischer Automobil-, Motorrad- und Touring Club HEMS service or ÖAMTC, which flies yellow H135T3 helicopters.

Anti-terrorism operations are flown in cooperation with the Austrian Police’s EKO Cobra SWAT team. Headquartered in Wiener- Neustadt, south of Vienna, the EKO Cobra has smaller contingents based at Linz, Salzburg, Graz, Klagenfurt and Innsbruck.

Their proximity to some of the Flugpolizei FESTs allows quick intervention of Cobra teams in time-critical live operations if needed. Four commandos can be airlifted by an AS350, sitting on the landing skids of the helicopter. On infiltration, these commandos use individual abseiling ropes, attached to the underslung cargo hook. The larger EC135P2+ carries up to eight SWAT commandos who use four ropes to fast-rope downwards. During these time-critical and high-risk operations, a camera-equipped EC135P2+ will join the troop-carrying helicopters to provide up-to-date tactical information.

Flugpolizei’s surveillance and policing capabilities underwent a high-profile test in June 2015 during the two-day G7 Summit in Bilderberg, Germany. Due to the proximity of this Bavarian town to the Austrian border and Innsbruck being the closest international airport for protestors to arrive in the area, the normal helicopter contingent of the Innsbruck FEST was increased to four. These were one camera-equipped EC135P2+, one ‘slick’ EC135P2+ for Cobra-airlift, one AS350B1 Ecureuil and the JetRanger III, the latter used for transport of police personnel. Additional helicopters, two EC135s and one AS350B1 were kept in reserve to counter possible escalation of protests in the Innsbruck area. Fortunately, all protests remained peaceful.

Prior to becoming a Flugpolizei pilot or camera operator, all candidates need to enlist in the Sicherheitsakademie (Police School) at Sankt-Pölten in Niederösterreich. After graduation and successfully passing medical and psychometric tests, the candidate will start his or her pilot training at the Schulungszentrum at Bad-Vöslau, south of Vienna. The unit’s six qualified pilot instructors teach on the sole remaining Bell 206B JetRanger III OE-XBT, which still offers outstanding training capabilities to the young students. 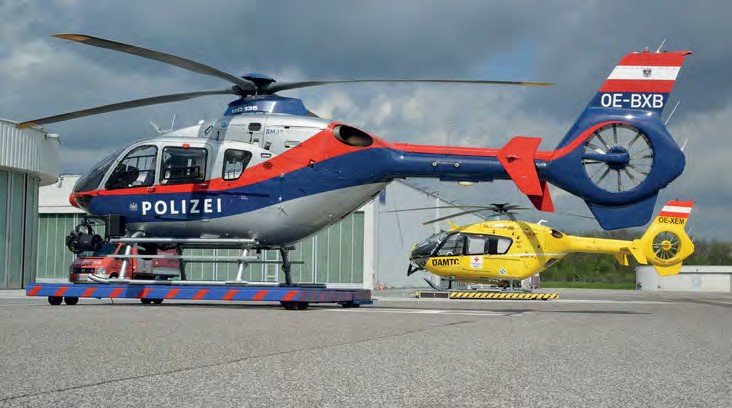 The Flugpolizei is only allowed to rescue people in specific types of difficulty to avoid overlap with the dedicated HEMS mission allocated to Austria’s ÖAMTC service operating a fleet of yellow H135T3s. 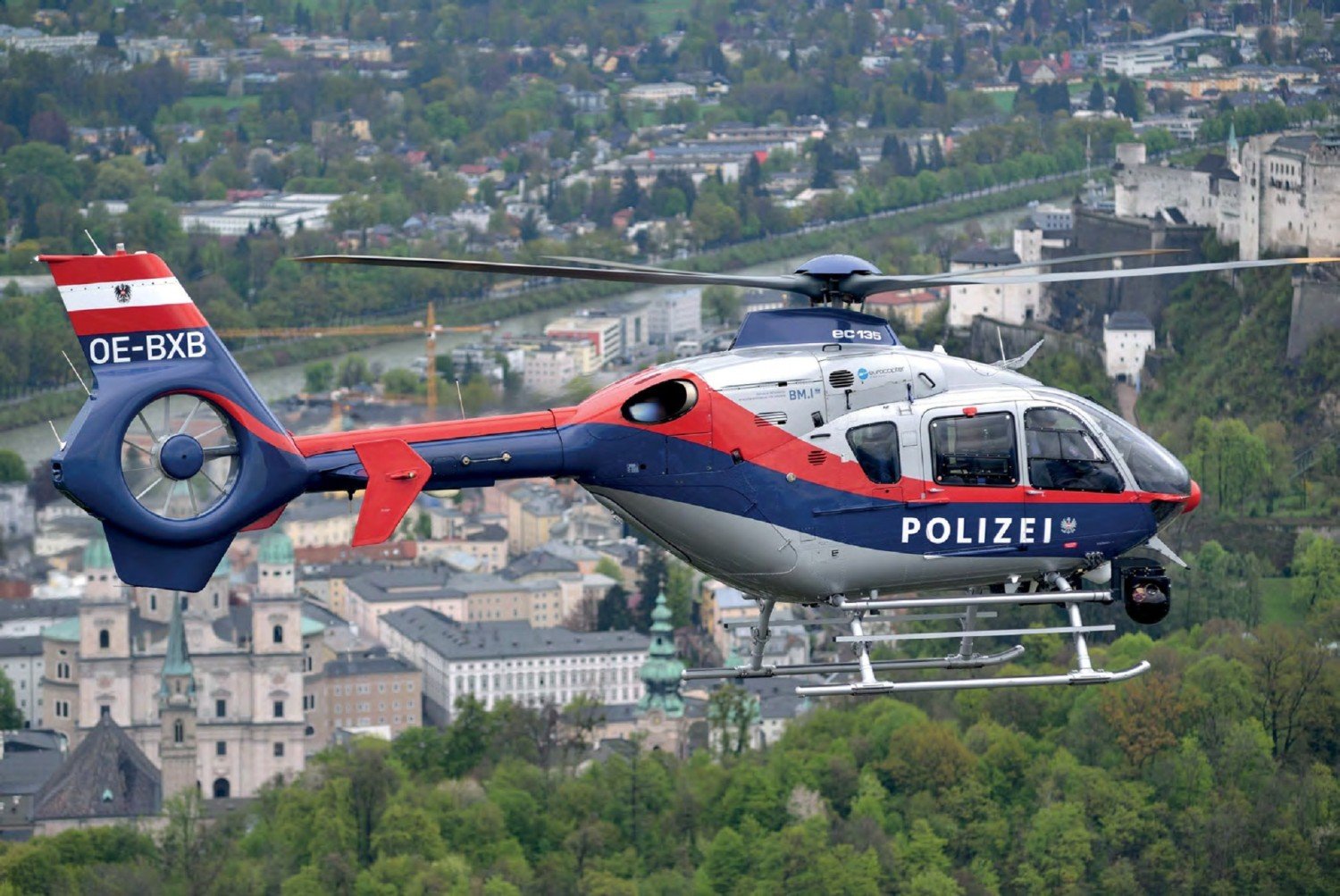 Four EC135s are used for surveillance missions, the three other ‘slick’ examples are used as multirole helicopters. 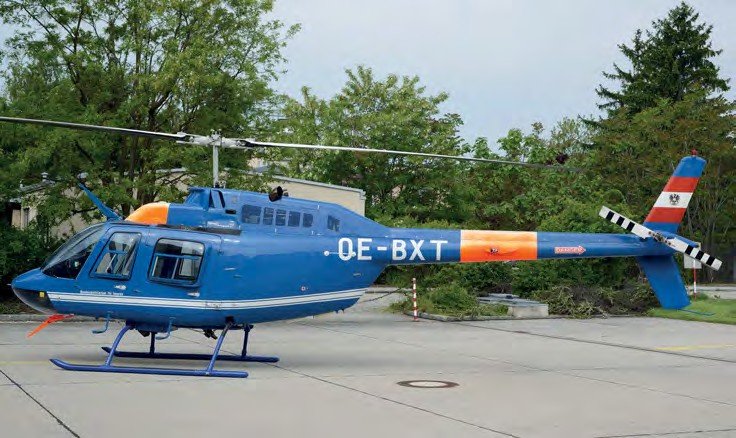 The sole remaining Bell 206B JetRanger III is used for training new pilots and the occasional transport of personnel.

During pilot training, frequent ‘outside’ landings and high mountain flying missions are flown to get the student pilots acquainted with the typical characteristics of the Austrian countryside. Having received their Flugpolizei wings, the new pilot starts EC135P2- conversion at Wien-Meidling as a co-pilot and will visit the various FESTs during a pilot apprentice phase. Soon afterwards they will be assigned as an operational pilot to one of the FESTs.

The first assignment will include a minimum of four years on site. In later years and depending on the types operated by their FEST, the pilot will also be able to become operational on one of the other helicopter types, most likely the AS350. Simulator training on the EC135 is frequently organised at Airbus Helicopters’ Donauwörth training centre, close to Munich. AI