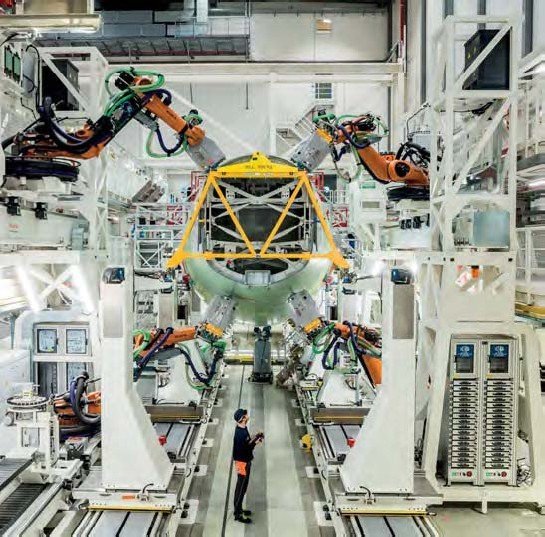 Airbus has introduced greater automation into producing A320 Family aircraft in Hamburg. Airbus

Airbus has inaugurated a new “highly automated” fuselage structure assembly line at its Hamburg facility to manufacture fuselage sections for the A321LR. The line uses modular and lightweight technologies including 20 robots, automated positioning by laser measurement, a digital data acquisition system and a new logistics concept.

According to an Airbus presentation shown to the Royal Aeronautical Society last year, eight KUKA robots and an Alema drilling and fastening end effector are used to drill and fasten orbital joints of the fuselage sections. There are approximately 6,800 holes for these joints on each aircraft. A further 12 KUKA robots in a system called Flextrack drill and fasten longitudinal joints, with approximately 6,500 holes for these joints per aircraft.

The presentation said the system enables automatic referencing, “one-shot drilling and fastener insertion”, no drilling jigs and better ergonomics for employees on the production line. It cited a 50% reduction in recurring costs and workload for orbital joints and a 30% reduction for longitudinal joints.

Airbus is also implementing new methods and technologies in material and parts logistics on the Hamburg assembly line to optimise production and shorten lead times, separating logistics and production levels, moving to what it calls “demand-oriented material replenishment” and using autonomous guided vehicles. The company also intends to automate painting as parts go through assembly.

The automated assembly process is part of Airbus’ wider objective to enhance digitalisation in the company’s industrial system, which it sees as instrumental in enabling faster and more efficient production and in turn ramping up A320 Family output as the company takes on the backlog of more than 6,000 jets. Mark Broadbent