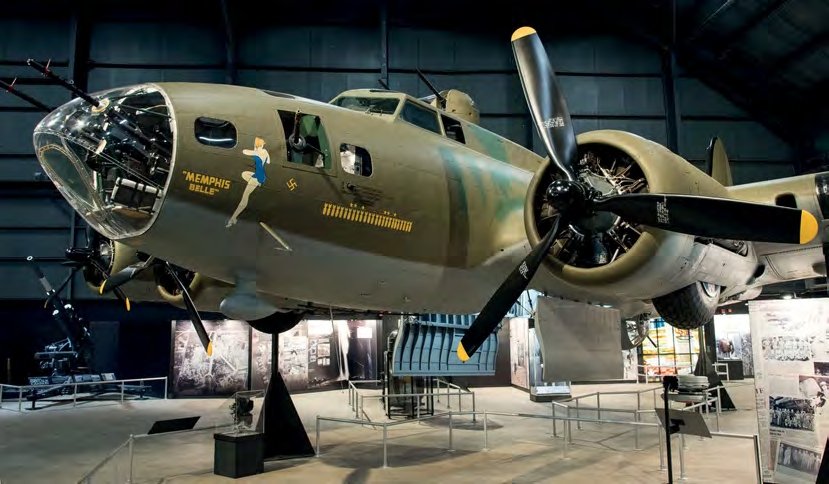 The dramatically posed B-17F 41-24485 Memphis Belle at Dayton on 17 May, surrounded by the new strategic bombardment exhibition
. NMUSAF

On 17 May, exactly 75 years after its crew flew their 25th and final mission over Europe, Boeing B-17F Flying Fortress 41-24485 Memphis Belle was unveiled to the public at the National Museum of the US Air Force in Dayton, Ohio, following a 13-year restoration/ conservation project. Surrounding the jacked-up bomber is a new strategic bombardment exhibition featuring a digitally animated map of the campaign, two Medals of Honor, items worn and used on significant missions, artefacts from bombing campaign leaders, a photographic display, and B-17 top and ball turrets.

It is the first time the aircraft has been on public display since 2002, when it was on show at Mud Island, a little peninsula on the Mississippi River in Memphis. The following year the rather bedraggled bomber was moved to a restoration facility at the former Naval Air Station Memphis in Millington, Tennessee, but in 2005 it was decided to relocate the aircraft to Dayton for restoration. Among those on hand at the unveiling were hundreds of family members of the Memphis Belle crew and maintainers and invited dignitaries. “This is a once-in-alifetime opportunity to witness a culmination of thousands of hours of work”, said Lt Gen Jacqueline Van Ovost, USAF director of staff. “It is a tremendous piece of our national history.”