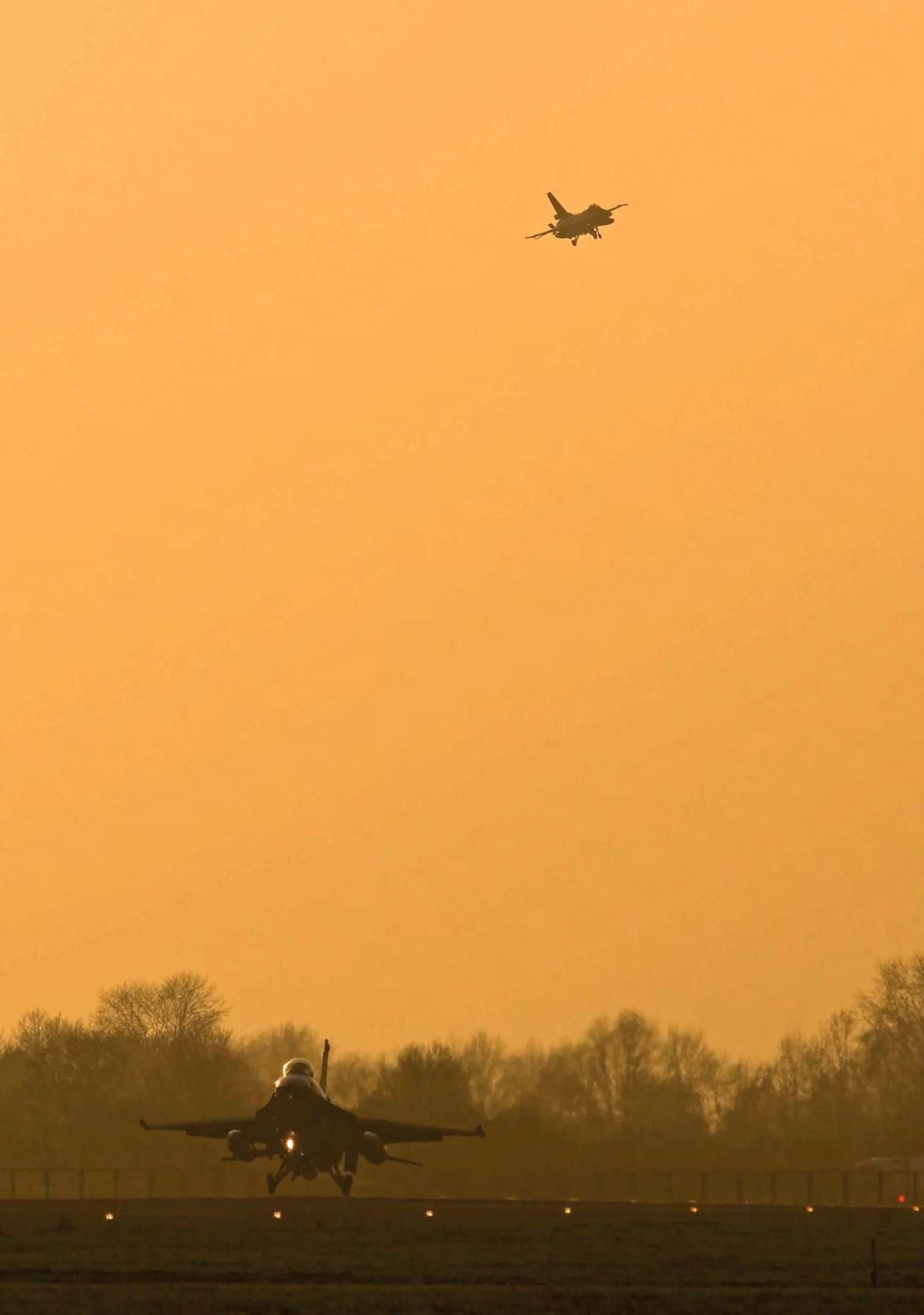 At the end of their ferry flight from Jordan, which included a fuel stop at Araxos in Greece, the F-16s landed at Volkel shortly before sunset.
All images Kees van der Mark

THE RETURN of six F-16AMs to Leeuwarden and Volkel Air Bases on January 2 marked the end of a significant contribution by the Koninklijke Luchtmacht (KLu, Royal Netherlands Air Force) to the coalition of air forces conducting strikes against ISIS in Syria and Iraq. With multiple missions flown every day during 33 months, the Dutch F-16s amassed close to 14,500 flying hours in more than 3,000 missions over Iraq and eastern Syria. The Dutch jets employed their weapons against ISIS ground targets on at least 2,100 occasions.

The F-16s of the KLu’s Air Task Force Middle East (ATF ME) operated from an undisclosed air base in Jordan during two periods. The first deployment began in early October 2014 and involved eight F-16AMs, including two spare aircraft. It was meant to last a year, but a political decision to prolong the Dutch forces’ involvement in the battle against ISIS – also (and still) including Dutch military training personnel in Iraq – meant that this deployment ended after 21 months, on June 30, 2016. The Dutch jets initially operated exclusively over Iraq, but by February 2016 ATF ME’s mandate was expanded to attack ISIS targets in the eastern part of Syria, as well. In the course of 2015, the number of assigned F-16s was reduced to six, including two spares, to decrease the pressure of the Middle East ops on both the jets and pilots.

The Dutch Falcons operated side by side with Belgian F-16s until July 2015; the Belgians returned home after nine months. Both air forces then took turns, with Belgian aircraft relieving the Dutch ones on July 1, 2016, and the KLu taking over again from the Belgian Air Component at the start of 2018. Yet the cooperation between the two air forces at their Jordanian base continued, as KLu force protection personnel guarded the Belgian jets during their deployment, and the other way around. ATF ME personnel rotated every three months: rotations 1 to 7 manned the first deployment in 2014–2016, while detachments 8 to 11 took care of the 2018 deployment.

The KLu put the 18 months in between the two deployments to good use with a fully packed training schedule in order to restore the F-16 pilots’ operational readiness in the full mission spectrum. Their training included participation in exercise Red Flag 17-2 and additional training in the US during January–March 2017, as well as many other exercises at home and abroad. 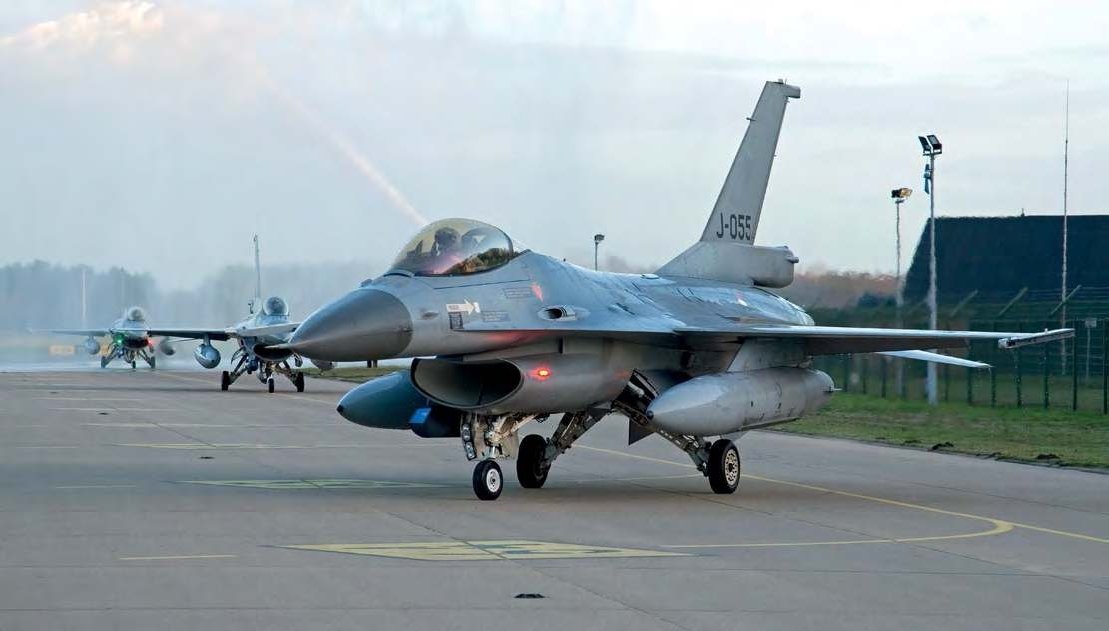 Following their ferry flight from Jordan, three of the four F-16s on the Volkel taxiway.

Last year’s deployment saw six F-16s – a mix of Leeuwarden and Volkel-based jets – depart to Jordan on January 3, 2018. With all the facilities still in place, the irst pair of KLu F-16s were able to kick of with the operational missions just two days later.

While ISIS lost most of its territory during 2018, there was still a lot of work left for ATF ME, and the F-16s added another 900 or so missions to the 2,100 lown in 2014-2016. Air Commodore André Steur, the KLu’s Director of Operations, said: “Our F-16s lew operational missions right up to December 31, the last day of our mandate. While we keep upgrading our jets, there is no denying that these are old airframes that need a lot of attention to keep them serviceable. I am very proud of what our technicians and support personnel achieved during this deployment, enabling the missions to go ahead as planned, and our pilots have done a great job in executing each mission extremely careful and in a very professional manner.”

The F-16s returning on January 2 had to make the trip without tanker support, necessitating a single fuel stop at Araxos Air Base in Greece. When entering Dutch airspace, two aircraft went to Leeuwarden and the other four landed at Volkel. Among the people welcoming the pilots at Volkel were Air Commodore André Steur and Lieutenant General Dennis Luyt, the KLu’s Commander in Chief. The personnel of the 150-strong ATF ME detachment 11 returned to Eindhoven Air Base later that same week.

The Dutch government announced on September 14, 2018, that ATF ME’s operations would not be extended after 2018. Among the reasons for this decision is that the KLu is committed to keeping F-16s available to the NATO Response Force (NRF)’s Very High Readiness Joint Task Force as well as NRF’s Followon Forces Group during 2019. The KLu’s F-16 community is also increasingly busy with the transition to the F-35A Lightning II, with the irst two new jets scheduled for delivery to 322 Squadron at Leeuwarden in the autumn of 2019. Nevertheless, KLu F-16s will remain available for operational deployments until 2023 at least. 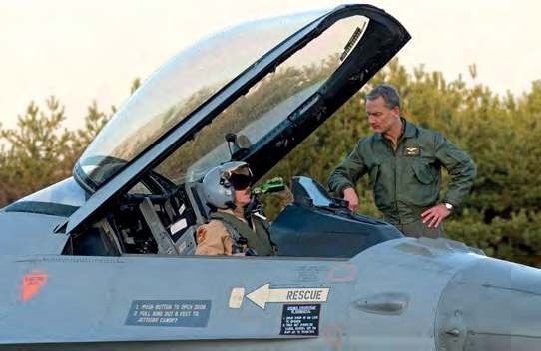 After engine shutdown, one of the pilots arriving at Volkel drink’s a bottle of Dutch beer while welcomed home by the KLu’s Commander in Chief, Lieutenant General Dennis Luyt. 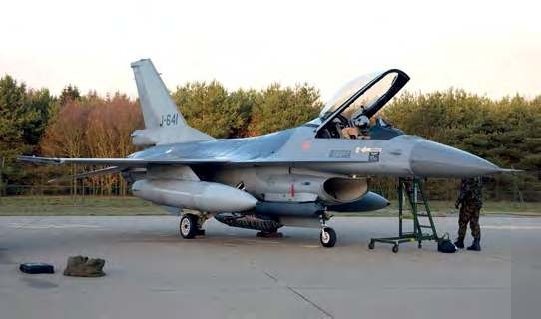 Among the jets returning from ATF ME’s final deployment was J-641, which was delivered to the KLu in September 1983. This aircraft carries a tiger striped pod on the centreline station, a signature of Volkel’s resident 313 Squadron.