Belgium’s 11 Squadron was created during World War One in March 1918 at De Moeren and was equipped with Hanriot HD1 and Sopwith Camel fighters adorned with a white Cocotte (paper swan) in which its pilots scored a number of victories against German aircraft. During the interbellum, the unit was disbanded and re-formed several times. On the eve of World War Two, 11 Squadron was based at Bierset, near Liège, flying Belgian-built Renard 31 aircraft with which it flew numerous reconnaissance and artillery support missions until Belgium surrendered on May 28, 1940.

On July 1, 1951, 11 Squadron was re-created as a night fighter unit at Beauvechain Air Base and adopted a grey bat in a yellow triangle as its unit badge. It successively flew the Mosquito NF30, Meteor NF11 and CF-100 Mk5 Canuck until it was disbanded once more in November 1960. The unit reappeared in May 1971 at Brustem Air Base performing instrument flying training on T-33A advanced trainers. With the arrival of the Alpha Jet 1B in 1978 came a new role for the Bats: initial operational training to prepare pilots for conversion on to Mirage VB or F-16A combat jets. The squadron moved with the Belgian Air Component’s Alpha Jets to BA120 Cazaux, France, on September 15, 2005, in the framework of the Franco-Belgian flying training school dubbed AJeTS (Advanced Jet Training School). This initiative came to an end when the Alpha Jet 1B+ was due to be withdrawn from use by the Belgian Air Component in October 2018.

The origin of the Belgian Air Component’s air transport force goes back to World War Two when Belgian pilots flew Douglas C-47 Dakotas in a number of RAF Transport Command squadrons. Shortly after the war, a Belgianmanned detachment was created within the Metropolitan Communications Squadron at RAF Hendon providing among others an air service between London and Brussels. The detachment moved to Haren-Evere on August 15, 1946, to become part of the newly formed Belgian Air Force on October 15, 1946. It was renamed 169 Wing on April 1, 1947, comprising 366 Squadron flying the C-47 and 367 Squadron equipped with a wide variety of communications aircraft, such as the Anson, Dominie, Oxford and Proctor. On May 1, 1948, the 15th Wing received its current designation, as did 20 and 21 Squadrons. The Sioux Indian was adopted as the units’ badge on September 1, 1949: 20 Squadron’s in a blue circle and 21 Squadron’s in a red circle. The Belgian Air Force air transport force moved to its current location at Melsbroek Air Base in 1950.

Alpha Jet 1B+ AT-24 (c/n B24-1104), seen at Beauvechain Air Base on September 19, 2018, painted in a commemorative colour scheme featuring a bat motif and the title ‘100 Years 11 Sqn’. Two other titles have been applied: ‘Training Fighter Pilots for 40 Years’ on the port air intake marks the introduction of the first Alpha Jet 1B for advanced pilot training in 1978; ‘14 Years AJeTS Franco-Belge Partners’ on the starboard air intake marks the creation of the joint Belgian-French AJeTS in 2015. Belgian Alpha Jets have flown over 190,000 hours of flying training since 1978, a statistic displayed along the side of the aircraft’s port engine nacelle. Black silhouettes of the Fouga Magister and Lockheed T-33 T-Bird represent advanced pilot training types that preceded the Alpha Jet 1B in the Belgian Air Force. A white F-16 silhouette on the aft fuselage (a Rafale silhouette appears on the starboard side) represent the fighters which Belgian and French student pilots will ultimately fly. Jos Schoofs 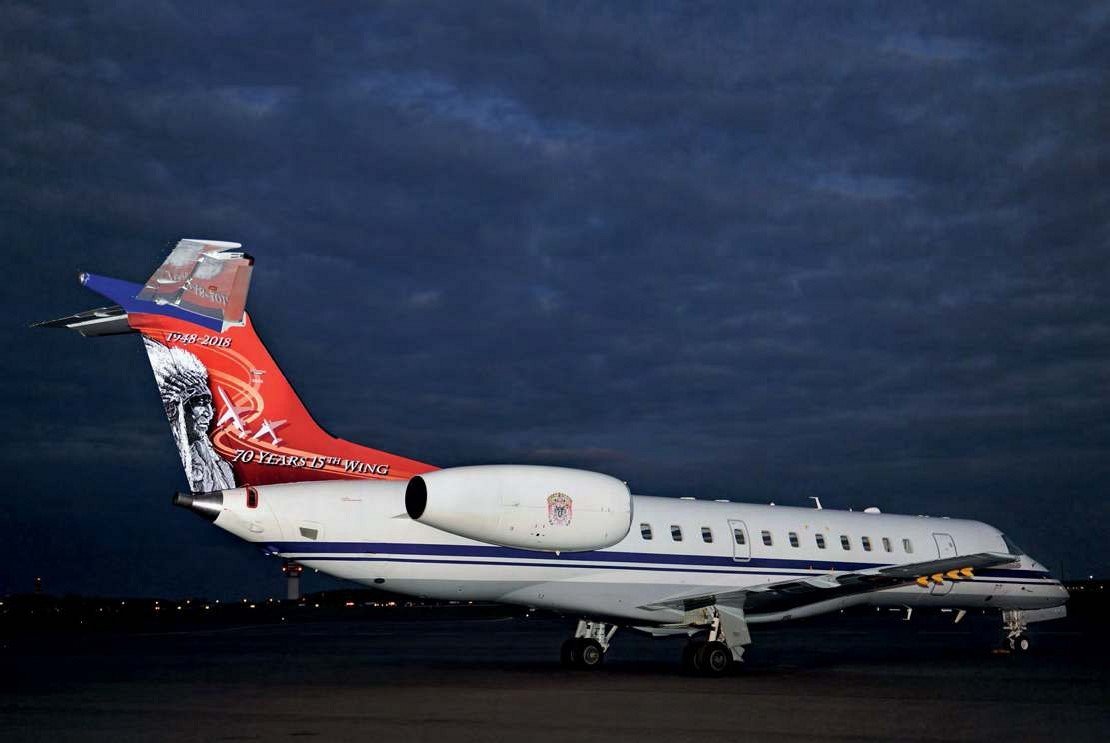 ERJ-135LR CE-02 (c/n 145480) of 21 Squadron has a commemorative colour scheme applied on its vertical fin featuring a Sioux Indian with a red backdrop to mark the 70th anniversary of the squadron and 15th Transport Wing. Silhouettes of an ERJ-135LR/ERJ-145LR and a Douglas C-47B Skytrain/Dakota IV, the latter being the types received from surplus US Army Air Force and RAF stocks. The aircraft is shown at Melsbroek on September 13, 2018. Jos Schoofs 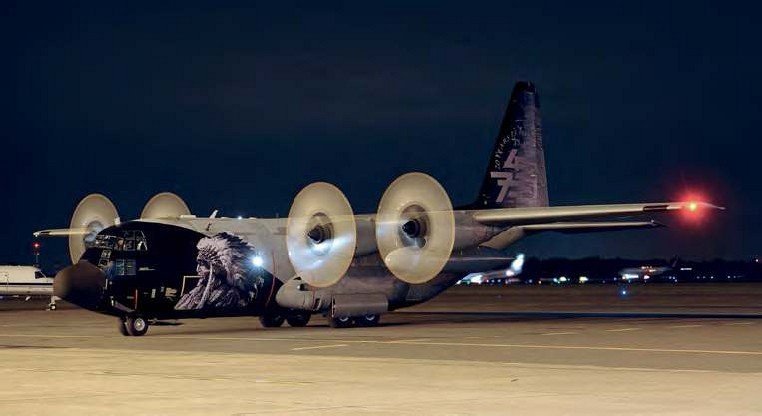 Dominating 20 Squadron’s 70th anniversary C-130 aircraft CH-10 (c/n 382-4481) is a Sioux Indian painted on the sides of the forward fuselage. Finished with a black tail, titles applied reflect 45 years of Hercules operations with the Belgian Air Force and Air Component, and the 70th anniversary of 15 Wing. The aircraft is seen at Melsbroek Air Base on September 13, 2018. Jos Schoofs

C-130H Hercules CH-10 participated in the wing’s parade held at Beauvechain Air Base on September 19, 2018. The commemorative colour scheme will be removed later this year when the aircraft is due for deep maintenance. Jos Schoofs