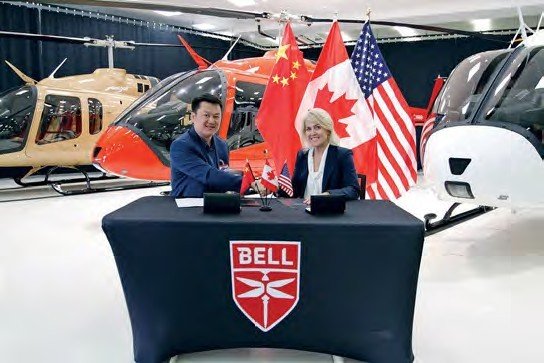 George Geng, President of Reignwood Zhuhai and Cynthia Garneau, President of Bell Canada at the handover ceremony on June 7, 2018, of the first three Bell 505 Jet Ranger X helicopters to be delivered to China. Bell 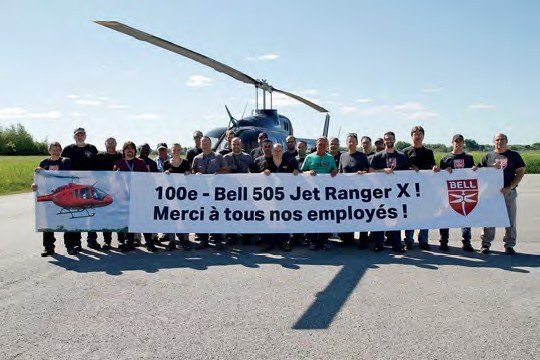 The 100th Bell 505 Jet Ranger X produced was handed over to Hunt Companies on June 26, 2018. The helicopter will be used for corporate travel duties. Bell

BELL ANNOUNCED on June 26, 2018, that it had completed the delivery of the 100th Bell 505 Jet Ranger X helicopter, which was accepted by Hunt Companies and will be used for corporate travel.

Earlier in June, Bell announced that it had also delivered the first three Bell 505s to China.

The three helicopters were delivered during a ceremony at Bell’s manufacturing facility in Mirabel, Canada on June 7, 2018, and are the first of a 110-aircraft order from Reignwood International Investment Group. Reignwood International is the launch operator and exclusive agent for the Bell 505 in China. Jacinto Monge, Bell’s Managing Director for North Asia said: “The arrival of the new Bell 505 Jet Ranger X builds on the success of the renowned Jet Ranger legacy in China. We are excited that customers will now be able to experience the new helicopter and we are looking forward to seeing many more taking to the skies as we continue to grow our footprint in China.”

The Bell 505 received type certification from the Civil Aviation Administration of China in May 2018. Nigel Pittaway