One of the most popular aircraft to have taken part in the D-Day commemorations at Duxford and Normandy during June, Douglas C-47 N24320 Miss Montana arrived back home at the Museum of Mountain Flying in Missoula on 25 June to a warm welcome from hundreds of local residents and a water salute from the airport fire service. During the trip, the former smoke-jumper (see Aeroplane August 2019) flew a total of 15,479 statute miles, in the course of 115 flight hours. From 21-27 July, Miss Montana and the crew from the Europe trip attended the Experimental Aircraft Association AirVenture show at Oshkosh, along with other ‘Daks’ and crews that joined the Normandy epic, to appear at several presentations. 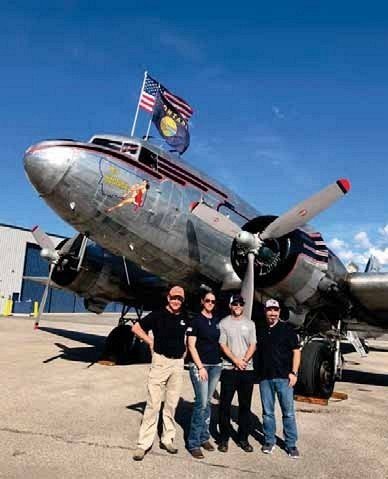 The Miss Montana crew after arriving back at Missoula — from left to right, co-pilot Bryan Douglass, engineers Crystal and Randy Schonemann, and pilot Eric Komberec.