The PR.XI PL983/L – affectionately known as ‘L’ by Duxford, Cambridgeshire-based owner/operator the Aircraft Restoration Company (ARCo) – is taking to the skies this summer with the message THANK U NHS emblazoned under its wings. Family-owned ARCo is also offering the British public the unique opportunity to be one of 80,000 ‘local heroes’, whose names will be written on the airframe.

Anyone will be able to nominate one person who they feel has supported their community during the Covid-19 pandemic, from frontline workers to local volunteers and even supportive family members. To submit a name, they will simply need to donate a minimum of £10 to the campaign’s specific JustGiving page fundraising for the NHS Charities Together, whose funds support staff, patients and volunteers across the country. In return for their donation, their nominated name may be one of the 80,000 to adorn ‘L’. The UK will be able to watch this extraordinary visual spectacle unfold as the names are added. 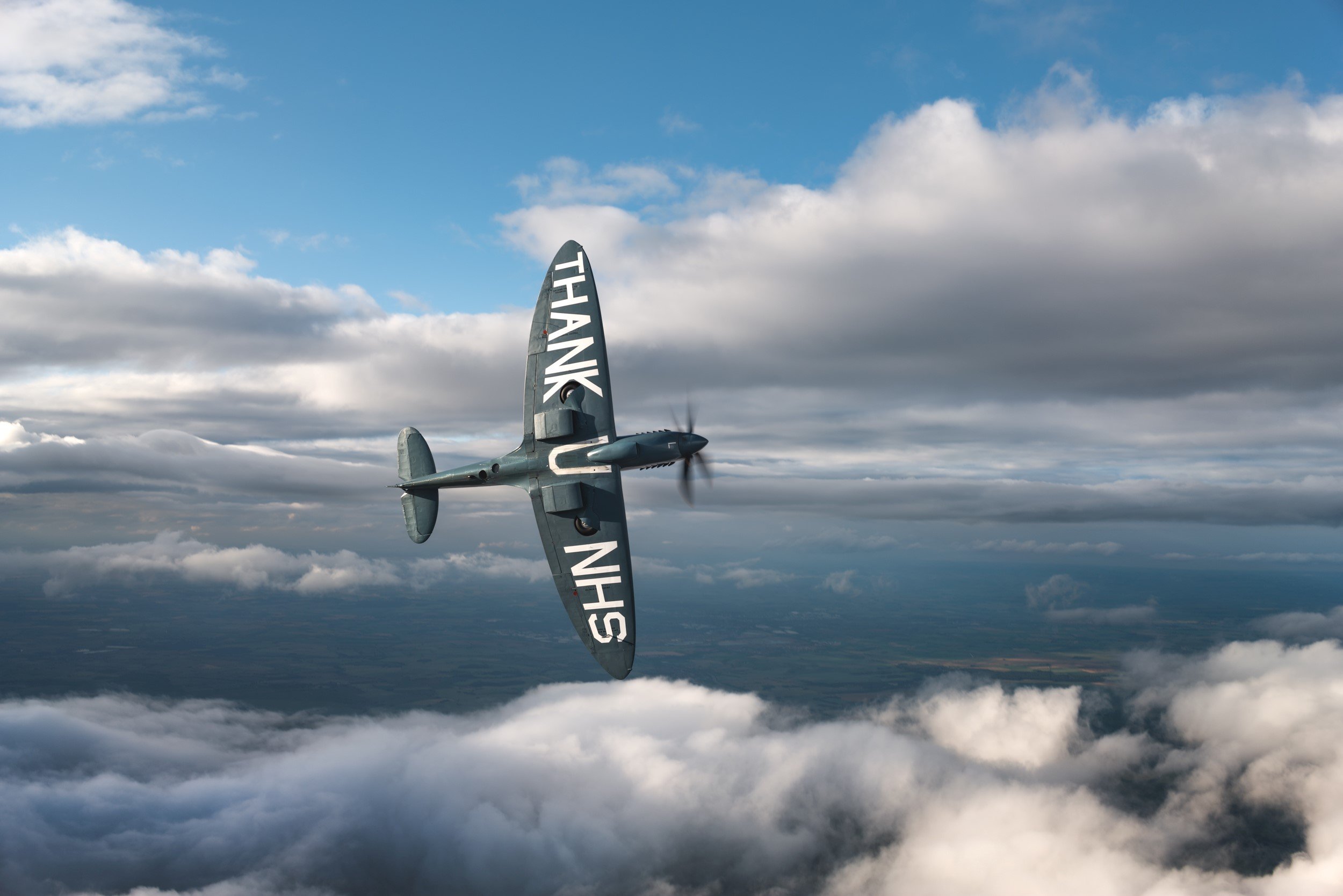 To align with the NHS’s 72nd Birthday and the ‘We are/together’ campaign, the Spitfire made its first flight of the project in time for Sunday’s (July 5) 5pm one-off ‘clap for carers’. This declared the JustGiving donations window open. The aim is to lift the spirits of those across the UK, many of whom are still living in some form of isolation, while also thanking the hospitals, communities and individuals who have been at the forefront of getting the country through the pandemic. During the 1940s, Spitfire funds were set up by local communities around the UK and commonwealth countries to encourage a sense of purpose and hope in the struggle against adversity.

Spitfire PL983, which was specifically built and used for photo-reconnaissance during World War Two, carrying cameras instead of weapons, will now once again embody the sense of freedom and togetherness it did then. The aircraft has an interesting history, which includes being flown and raced by famous female ATA pilot Lettice Curtis; her own signature can already be seen on the side of this Spitfire, leading the way for many more to be added while raising money for an important cause… a true modern-day Spitfire fund.

The Aircraft Restoration Company’s founder and director is John Romain, a former Hawker Siddeley apprentice and BAE aero engineer. John is also a highly experienced pilot with dozens of types in his logbook, including more than 1,000 hours in Spitfires alone.

ARCo undertakes projects from re-builds to major servicing, all the way to minor repairs and routine maintenance for various vintage aircraft owners in the UK and around the world. It also performs major servicing on the Battle of Britain Memorial Flight Lancaster and Dakota. 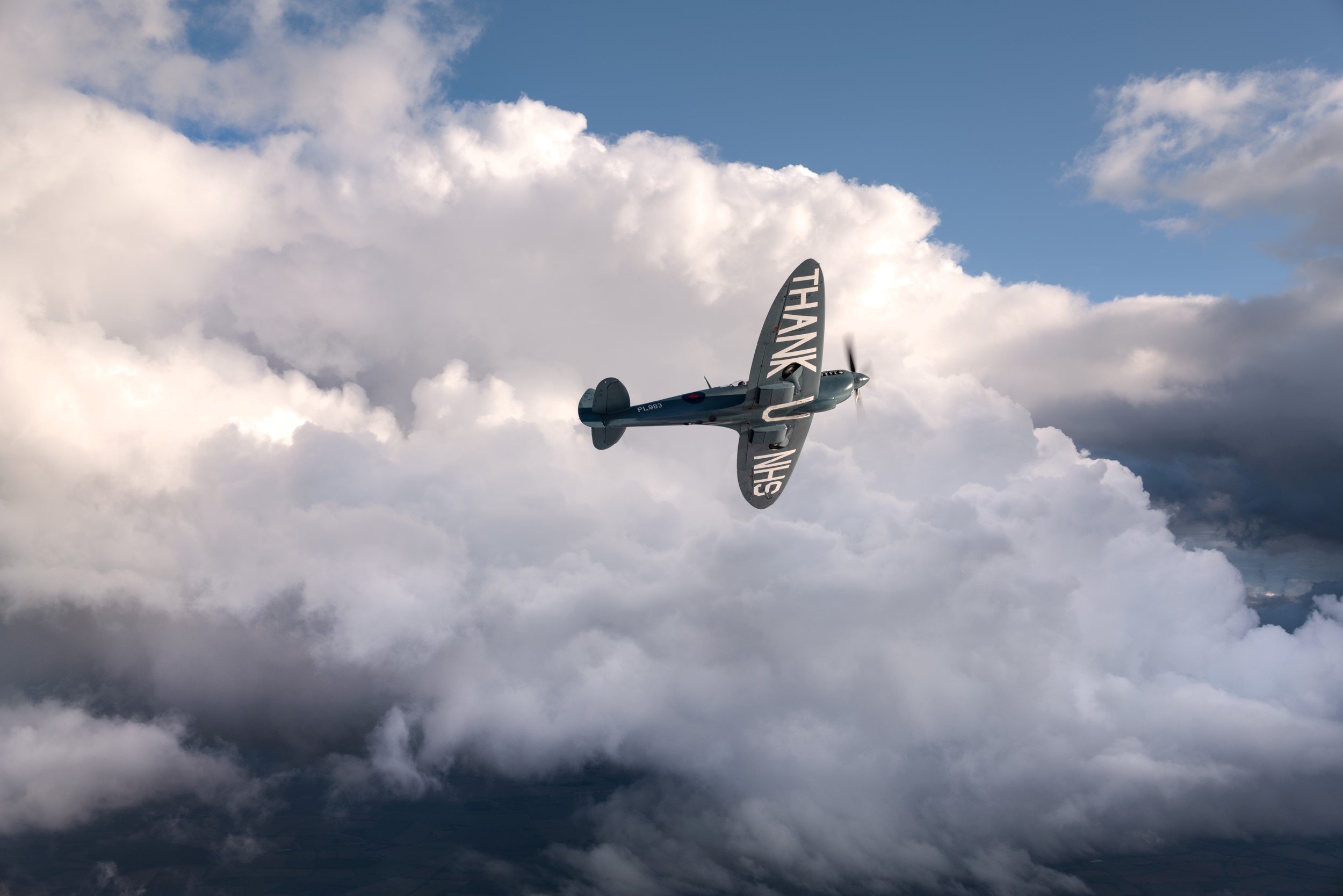 Of the project, John Romain said: “The response to our initial flight over the last 8pm #clapforourcarers Thursday was incredibly humbling, with hundreds of people from the local community sharing how wonderful it was to not only see the Spitfire but also to read the message emblazoned across its wings. After such positive reaction we decided to leave the message painted on the Spitfire for the rest of the flying season and began thinking of ways we could use it to help give something back to the NHS staff, who have been our heroes throughout this difficult time. This is where the idea to add the names whilst raising money for the NHS Charities Together began.”

The public will be able to view carefully planned local flight routes via the Aircraft Restoration Company Instagram and Facebook pages. During these routes it will fly past communities and hospitals including the NHS Nightingale in London. Flight paths will be updated throughout the duration of the donation window, which will then close on Sunday September 20, 2020 to align with the Spitfire closing the show at the IWM Duxford’s Battle of Britain Air Show.