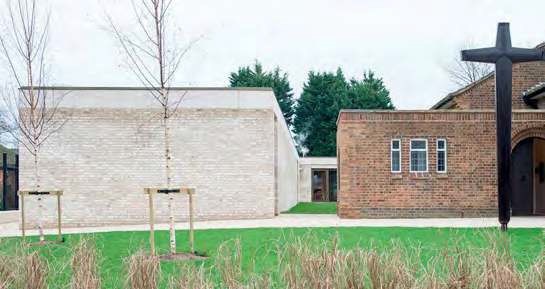 Sixteen months after building work began, phase one of the Biggin Hill Memorial Museum was officially opened in a new building adjacent to the Grade II-listed St George’s RAF Chapel of Remembrance on 30 January.

More than 80 exhibits — many donated by the public — are featured in the interactive, multimedia displays. They include an unexploded 50kg bomb which fell just south of the airfield, the Biggin Hill ‘scramble’ and ‘victory’ bells, a Luftwaffe tea set and a wooden table-top with fighter pilots’ names carved into it, saved from a local public house. Audio guide commentary is provided by historian Dan Snow, joined by the voices of veterans including Wg Cdr Tom Neil and Sqn Ldr Geoffrey Wellum, both of whom died in July 2018.

Organisations and individuals have provided more than £5.3 million to allow phase one of the long-awaited scheme to become a reality. Building work started in September 2017, following the award of £2 million from the Heritage Lottery Fund. Other funds included £2 million from central government along with grants from Bromley Council. A £1.5-million endowment fund is also in place to support the future management of the museum. Generous donations continue to be received towards developing phase two, including a learning centre and memorial wall.

“There has long been an aspiration for a museum which remembers ‘the Few’ and honours ‘the Many’. The museum shares people’s experiences of war at RAF Biggin Hill in their own words.

We hope their stories will inspire generations and continue to remind us of the very best of the human spirit.”

The museum also secures the future of St George’s RAF Chapel of Remembrance, the 1951-built memorial to the 454 pilots killed flying from Biggin Hill during the Second World War. The museum is at Main Road, Biggin Hill, Kent TN16 3EJ, and is open from Wednesday to Sunday, between 10.00 and 17.00hrs.