The order was announced at the 2019 Asian Business Aviation Conference (ABACE) in Shanghai, at which Bombardier had the first Global 7500 to be delivered to a customer (C-FXAI) on display.

Khader Mattar, Bombardier Business Jet’s Vice-President of Sales for the Middle East, Africa, Asia-Pacific and China, said: “We are proud to announce this firm order as the Global 7500 aircraft makes its public debut at ABACE, one of the world’s most important aerospace exhibitions.”

The company had previously signed a letter of intent with the Canadian manufacturer for up to 18 Global 6500 and Global 7500 aircraft in May 2018, in a deal reportedly valued at $1.14 billion.

In September 2018, HK Bellawings announced it had firmed an order for an initial four Global 6500 and two Global 7500 aircraft.

The latest order takes the total number of aircraft on firm order to ten (four Global 6500s and six Global 7500s) and is valued at $291 million.

HK Bellawings President, YJ Yang, said: “We are thrilled to offer our customers access to the unparalleled Global 7500 aircraft as part of our unmatched fleet.

The Global 6500 and Global 7500 aircraft align with HK Bellawings’ rapid development to be a onestop business aviation solution.

As the operator that will manage one of the world’s largest fleet of Global 6500 and 7500 aircraft, HK Bellawings Jet will further expand our business scope and continuously pursue higher goals.”

According to Bombardier, HK Bellawings will operate the largest fleet of Global 6500 and 7500 in China. Established in 2014, the company currently operates a fleet of Bombardier Challenger and Global aircraft. Nigel Pittaway 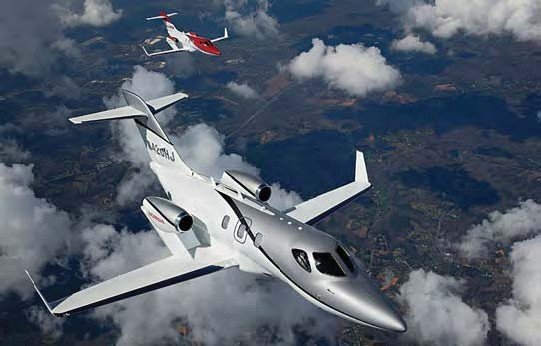 HONDA AIRCRAFT Company announced on April 11, 2019, that its HA-420 HondaJet Elite has received type certification from Transport Canada Civil Aviation. The company says the milestone clears the way for the delivery of the first aircraft to the Canadian market, which was due to begin immediately.

Honda Aircraft Company President and CEO Michimasa Fujino said: “Following the overwhelmingly positive reaction to the HondaJet in Canada, we are pleased the HondaJet Elite has now also received type certification in the region. As the popularity of the aircraft increases around the globe, we are proud of the strong relationships we have with aviation bureaus worldwide, including Transport Canada.

Honda has currently delivered 118 HondaJets around the world and says the aircraft has demonstrated a despatch reliability of 99.7%.

The first ACJ319neo is pictured taking off on its maiden flight from Hamburg on April 24, 2019.
Airbus

The first Airbus AC319neo departs Toulouse on its record-breaking flight of 16 hours 10 minutes on April 26, 2019.
Airbus 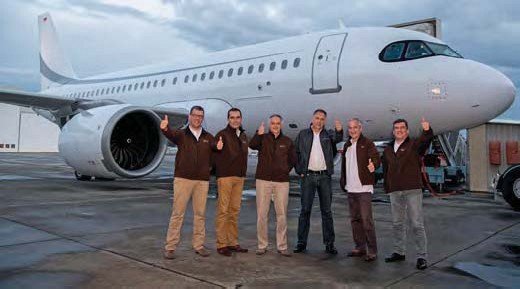 THE FIRST flight of the Airbus ACJ319neo, the latest member of Airbus Corporate Jets’ ACJ320neo family of large cabin corporate aircraft, occurred on April 24, 2019. The flight, which took one hour 55 minutes, was undertaken from Airbus’ facility in Hamburg.

The first aircraft has since begun a short flight test programme to verify features that are unique to the ACJ variant of the commercial A319neo, including the five additional centre fuel tanks located in the aircraft’s cargo hold.

During the flight test programme, the aircraft also set a record for the longest flight of an A320 family aircraft flown by an Airbus crew. The previous record was held by an ACJ319, which had flown from Santiago to Paris in 15 hours 15 minutes during 1999.

The flight, conducted on April 26, 2019, only two days after the aircraft had performed its maiden flight, flew from Toulouse to northern Greenland and back in 16 hours 10 minutes. The flight included a simulated diversion under 180 extended-range twinengine operations regulations.

After completion of the flight test programme, the aircraft will have its VIP interior installed by Fokker Techniek in the Netherlands, before delivery to K5 Aviation in Germany.