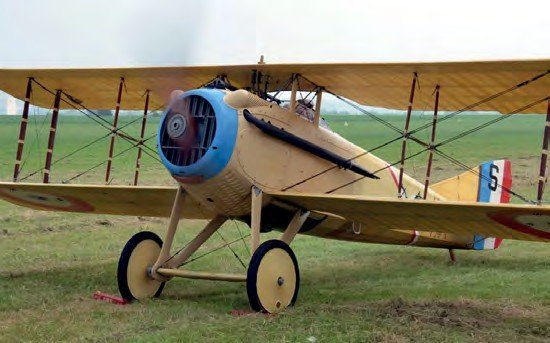 The Louis Blériot-owned SPAD VII, S248, runs up under the power of its 220hp Hispano-Suiza at Compiègne-Margny on 10 June. JEAN-PIERRE TOUZEAU

The sixth Compiègne Aero Classic show, held at Compiègne-Margny airfield in northern France on 9-10 June, provided an opportunity to view the latest arrivals at the resident Cercle des Machines Volantes (CMV) collection. The undoubted highlight was Spad VII S248, which is owned by Louis Blériot, grandson of the man himself. It arrived at Compiègne from its regular base at Angers, north-west France, on a truck the day before the show began.

This original 220hp Hispano- Suiza-powered machine served with the American Expeditionary Force during World War One, before being shipped to the USA after the armistice and sold to Paramount Pictures. It was used in the films Men with Wings in 1938, Stunt Pilot in 1939, and Captain Eddie, starring Fred MacMurray as Eddie Rickenbacker, which was released in June 1945. The fighter was subsequently owned by Hollywood pilot Paul Mantz and flown at several airshows in the 1950s. During 1961 Mantz teamed up with fellow film flying legend Frank Tallman to form Tallmantz Aviation Inc, the SPAD going on show at the Tallmantz Movieland of the Air Museum at Orange County Airport, Santa Ana in December 1963.

The machine was subsequently displayed at the Wings and Wheels Museum in Orlando, and during the auctioning-off of that world-class collection in December 1981 was acquired by Louis Blériot, who loaned it to the Imperial War Museum at Duxford for several years. The wings fitted to S248 are known to have been constructed by Norwich-based Mann Egerton. The machine will stay on display in the CMV hangar until September, after which it will move back to Angers. 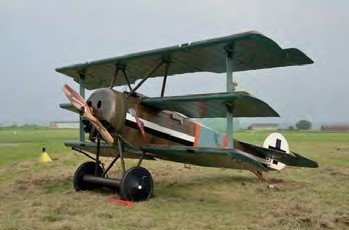 Fokker DrI reproduction F-AZGN on the Compiègne turf. It now sports the colours of DrI 489/17 of Jasta 14 during 1918. JEAN-PIERRE TOUZEAU

A recent arrival that will be staying at Compiègne is an Oberursel rotary-powered Fokker DrI reproduction, F-AZGN. Construction of this totally accurate machine began with Eberhard Fritsch in Germany, the fighter being completed by a team at the La Ferté-Alais-based Memorial Flight. It made its first flight in 1991, and was initially operated by the Memorial Flight.

A Blériot XI² reproduction is also now with CMV. Construction was started by the German branch of the Memorial Flight using some plans and an original unrestored aircraft owned by the Musée de l’Air as a pattern aircraft. The rotary engine and equipment are original. It wears the markings of Escadrille BL3, which was to become the famous SPA 3 ‘Cigognes’ based at Belfort during July 1914.

A CMV team will shortly complete the restoration of a Mauboussin M202 racer, F-PAOI, while a project to reconstruct, using original drawings, a Hispano-Suizapowered Latécoère 28 mail-plane/eight-seat airliner, a type made famous by France’s Aéropostale during the late 1920s, is now under way.