Company releases results for the second quarter of 2020 and reveals a $3 billion operating loss, with orders down by $30 billion.

American aerospace giant Boeing will end the production of the iconic 747 – as part of a series of changes its making as losses continue to mount due, in part to the COVID-19 pandemic.

The company also said it would cut production rates across its entire range in response to reduced demand caused by the virus. The firm’s 787 construction will be slowed to six per month by 2021 while the 737 will ramp-up at a slower rate than planned with a gradual increase to 31 per month by the beginning of 2022.

Deliveries of Boeing’s next-generation 777X – which went began its flight-testing programme in January this year – will also be delayed to 2022.

These changes come as the company revealed a $3bn operating loss in the second quarter from April to June, of which its Commercial Airplane division was responsible for $2.7bn. Its net losses for the same period stand at $2.4bn.

During the second quarter, Boeing’s revenues from the sale of commercial jets stood at $1.63bn, down 65% from the same period last year – this is in part due to a 78% drop in the number of aircraft deliveries. 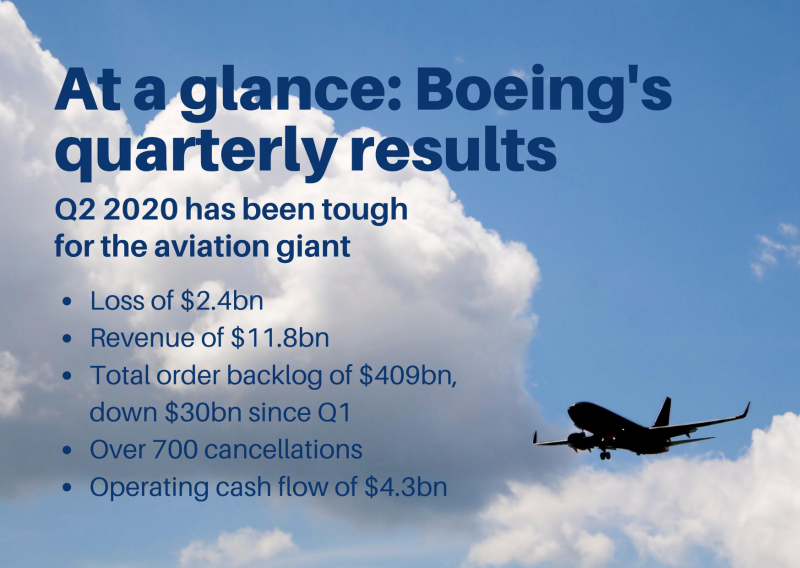 Its order backlog has also taken a hit in the last three months dropping by $30bn to $409bn – including more than 4,500 commercial examples.

In a letter to employees, Dave Calhoun, Boeing’s CEO, commented: “The reality is the pandemic’s impact on the aviation sector continues to be severe...This pressure on our commercial customers means they are delaying jet purchases, slowing deliveries, deferring elective maintenance, retiring older aircraft and reducing spend — all of which affects our business and, ultimately, our bottom line.”

As a result of reduced output, Boeing has already announced a net 10% reduction in personnel in 2020 but today has revealed it will have to “further assess the size of our workforce”.

“This is difficult news, and I know it adds uncertainty during an already challenging time. We will try to limit the impact on our people as much as possible going forward. And as always, we will communicate openly, honestly, and transparently,” Calhoun added.

Boeing is currently facing two big challenges: the first is the COVID-19 pandemic but it is also battling with getting its 737 MAX back in service so it can resume deliveries. The aircraft was grounded by the FAA in March 2019 following two crashes involving the type in the previous five months.