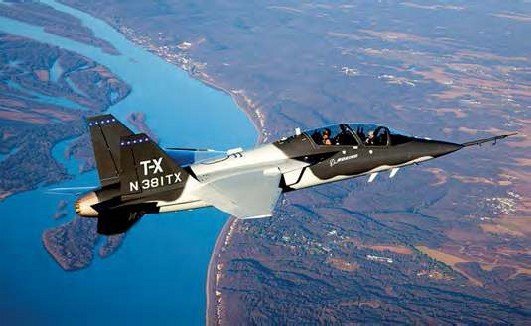 Winner of the US Air Force T-X programme is the Boeing model BTX-1.Boeing

The US Air Force announced the award of the contract for its next-generation T-X (trainerexperimental) advanced trainer to the Boeing-Saab team on September 27. Initial production will be 351 aircraft and 46 simulators, enabling the Air Force to replace its current Northrop T-38C Talons. However, the contract covers up to 475 aircraft and 120 groundbased simulator training systems, potentially worth up to $9.2 billion.

This price is considerably less than the $19.2 billion the Air Force had publicly estimated it would spend on the contract. The Air Force has the option to accelerate its T-X production buy under the contract, which allows for production to be extended without cost increase if - for example - the T-X is ordered for adversary training.

This apparent willingness by Boeing to sign a low-cost contract, likely assuming that it would recover any losses incurred building the initial production run over the decades the new trainer will be in service, may have proven critical in a competition that was thought would be decided primarily on procurement price. Boeing’s willingness to sign for a low production price may also represent the impact of proprietary fabrication technologies, developed by Boeing’s Phantom Works, that the design was intended to use.

The Boeing-Saab T-X, a new design, had been considered the underdog to the T-50A, proposed by Lockheed Martin and Korean Aerospace Industries, with the Leonardo T-100 version of the M-346 as a long-shot alternative. Raytheon dropped out of a teaming agreement with Leonardo, reportedly after concluding that signing a low procurement cost contract (as Boeing did) was the only way to win.

There has been speculation regarding the political impact of the decision. Certainly, announcing a major procurement that will keep Boeing’s St Louis, Missouri facility going into the 2030s is likely to be important. Boeing has stated that over 90% of the T-X will be US-sourced.

The first T-X deliverables, under the engineering and manufacturing development (EMD) phase of the programme, will include five aircraft and seven simulators valued at $813 million. The T-X is planned to enter service at Randolph Air Force Base, Texas in 2023 and achieve initial operational capability in 2024 and full operational capability by 2034.