Boeing vs Airbus: how do their product lines compare?

The scale of these two manufacturers is impressive, but how do their product portfolios compare. Key.Aero investigates…

The two giants of the commercial aircraft manufacturing industry – Boeing and Airbus – have been competing against each other for nearly half a century. The duopoly arose following a sequence of mergers and failed rivals such as Lockheed, Douglas and McDonnell Aircraft Corporation etc.

What’s left, is the fierce rivalry of two very different organisations, one which is based in the United States concentrated very heavily on the Pacific Northwest and the other, a pan-European giant with manufacturing and development facilities in four countries.

Comparing the two is a complex task because there are so many different variables by which a contrast can be made. We will focus in this article, on analysing the pair’s single-aisle and widebody line-up to see how they compare.

Within the single-aisle sector, the duo each have their own prominent product offerings. For Airbus it’s the A320 Family and for Boeing, the 737 series is its effective counterpart. The main difference between the pair’s narrowbody line is Airbus’ addition of the A220 series which are shorter and cheaper than the smallest A319neo. The A220 programme was acquired by the European manufacturer in 2017 from Bombardier.

Boeing attempted to purchase Embraer’s commercial aircraft division this year – in a bid to have a similar offering to the A220 – but the deal fell through when the American airframer pulled out of the deal.

As you can see in the above table, many of the aircraft from both manufacturers are comparable in their seating capacities and list prices. The A321neo for example, which is the direct competitor to the 737 MAX 10, is competitively priced just slightly below the American airframer’s jet.

The Airbus A320neo, which rivals Boeing’s 737 MAX 8, is priced very aggressively just under that of the US-built jet. The European example can also carry two more passengers but has a smaller maximum range. 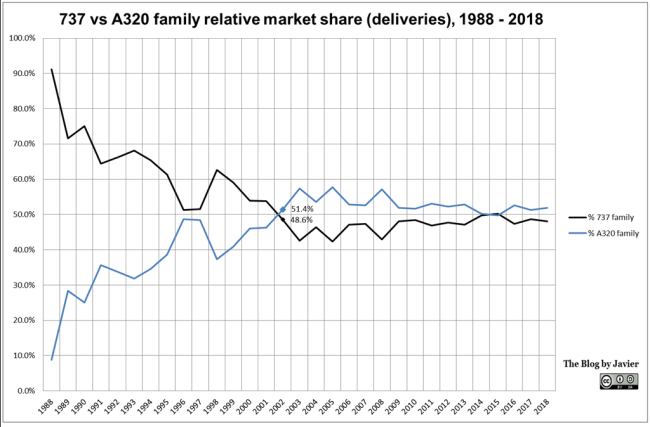 Of course, the elephant in the room relating to the fact that Boeing’s entire narrowbody line-up has been grounded for more than 18 months now after two fatal crashes involving the 737 MAX caused its type certificate to be revoked, can’t be ignored.

During this time, Boeing has been unable to deliver its narrowbodies to any customers. Meanwhile, until the COVID-19 pandemic dealt a blow to both manufacturers, Airbus had ramped up production and delivery rates for its single-aisle fleet.

Within the widebody market, there is a little bit more variety. Boeing is arguably more dominant in this sector, although over the last decade or so, Airbus has begun to catch up following the introduction of its next-generation examples including the A330neo and A350.

The Boeing 777-8 and Airbus A350-1000 are arguably the most competitive products in the pair’s widebody range. The European option carries one more person, but the American-built jet can fly slightly further. This comes at a price, however, because the 777-8 is priced $28m more than the Airbus.

At the end of the day, however, the list price of jets means very little in the grand scheme of things because airlines and other customers will be offered attractive pricing if they sign deals for multiple airframes.