The first of 20 Bombardier CS300s for Air Baltic is YL-CSA (c/n 55003), pictured here before delivery with its Canadian registration C-FOWY. Bombardier Aerospace

The year 2016 was a make or break one for the ambitious Bombardier C Series programme.

Lambasted as a “flawed business model” by competitor Airbus, long-delayed and massively overbudget, the past year brought several moments of truth for the Canadian manufacturer.

But in this tight situation, Bombardier was able to deliver. Both types of the C Series are now in the air with their respective first operators, and the feedback from airlines and passengers was overwhelmingly positive. Swiss got their first CS100 in the summer, and Air Baltic of Latvia received the first CS300 at the end of November, when its first aircraft, YL-CSA (c/n 55003), was delivered from Montreal to Riga.

Alain Bellemare, Chief Executive Officer of Bombardier, said: “A year ago people thought that the C Series and Bombardier would go down, and now we see a flawless, perfect performance; what a turnaround.

This is an amazing accomplishment, the C Series will be an anchor for many years to come for commercial aviation at Bombardier. We are getting a tremendous traction with it.” Pressed later about when the C Series would make profits, Bellemare offered, “by 2020”.

Rob Dewar, Vice-President C Series programme, who has been labelled the father of the C Series, boasted: “To successfully deliver two different versions of a brand-new aircraft within five months of each other has never before been done in the industry.” Two years ago, Bombardier had committed itself to deliver the CS100 in the second quarter of 2016 and the CS300 by the end of the fourth quarter, which has now happened.

The CS300 touches down in Riga on November 30, following a night stop in Stockholm. Air Baltic

This is a “huge milestone”, according to Dewar. Due to delays in deliveries of the Pratt & Whitney PW1500G engines, Bombardier had to slash the 2016 delivery target from the original 15 aircraft to just seven. But Dewar said: “The C Series now gathers momentum and this will translate into orders.” He remained optimistic that Bombardier would be able to announce new customers for the C Series within months. The last of just 358 firm orders (123 of which are for the CS100, with 235 for the CS300) came in June 2016 from Air Canada for 45 CS300s, for deliveries starting in 2019.

Air Baltic first ordered the C Series at a time when the programme had almost no credibility in the industry, in late 2012; it was one of only two orders that year. A beaming Martin Gauss, Chief Executive Officer of Air Baltic, said: “Today we can see it’s the better aircraft than what Airbus or Boeing had to offer us. We in Latvia are one of Europe’s smallest countries, and the fact that we are the first to take the biggest Canadian jet speaks for itself.”

Pauls Calitis, Senior Vice-President Flight Operations at Air Baltic and captain of the delivery flight to Riga via Stockholm, was honest enough to call it, “a long, difficult but successful process” to finally take delivery of the first of 20 CS300s the carrier has ordered.

But Gauss underscored his satisfaction with his airline becoming the first CS300 operator worldwide: “Airbus did their utmost for us to take the A319neo instead, but that wouldn’t have been so good for Air Baltic, as the CS300 has the best operating cost in its class.”

Peter Koch, Chief Pilot for the C Series at Swiss, which will also get 15 CS300s starting in May 2017, said at the ceremony: “For a brand-new aircraft, the C Series performed better than expected.”

The delivery flight of the first CS300 over the Atlantic was a very smooth experience, with the engines performing perfectly even on start-up, a critical phase for the geared turbofan. Gerhard Ramcke, Air Baltic’s C Series Chief Pilot, explained: “We don’t have the same problems as Airbus A320neo operators, as they use the different PW1100Gs.”

The flight left Montreal at 04:13hrs EST and needed six hours and 40 minutes to reach Stockholm-Arlanda, the planned night stop before the short hop to Riga the next morning. The distance of 3,131 nautical miles (5,800km) is well within the range of the CS300, even with a full load of passengers, and there were only 18 people on board in this case. Bombardier’s specifications list the CS300’s range as being 3,300 nautical miles (6,112km). Swiss and Air Baltic are initially putting the C Series on short European hops. The first scheduled flight of an Air Baltic CS300 took place on December 14 from Riga to Amsterdam.

But Air Baltic has more ambitious plans. It has announced its intention to fly to the Persian Gulf with its new aircraft, probably to Abu Dhabi. The distance of 2,321 nautical miles (4,300km) would take about five and a half hours of flight time – no challenge for the CS300, which could operate in both directions without a weight penalty.

And the on-board product is definitely fit for a long flight. The cabin is lit up in Air Baltic’s corporate colour, green, which makes a very impressive first sight on entering the aircraft. It underscores the fact that the C Series is a serious airliner along the lines of Airbus or Boeing types, as even the cabin appearance very much resembles those companies’ latest A350 and 787 long-haul jets. The much bigger windows and high ceiling contribute to a widebody feeling, though of course the C Series is a singleaisle aircraft with 2+3 seating.

Air Baltic has equipped its cabin with 145 SlimPlus seats manufactured by Zodiac, clad in leather of a light grey, almost white. It’s a colour that might be prone to look stained after some time of heavy-duty use but they certainly look very stylish now.

Despite the pitch being 30in (762mm), the seats feel very roomy thanks to their slim architecture. The middle seats on the right side of the cabin are 19in (482mm) wide. All other seats boast a generous width of 18.5 inches (470mm), while an A320 usually offers 17 inches (432mm) of seat width. Air Baltic’s seats allow a considerable recline, with the whole seat pan moving forwards and upwards, minimising the impact for the passenger sitting behind. Air Baltic has opted not to use different seating for business class, but rather has stitched “Seat not to be occupied” into the seat covers in the first three rows, on the aisle seat of the left side and the middle seats on the right side, to keep these seats free. 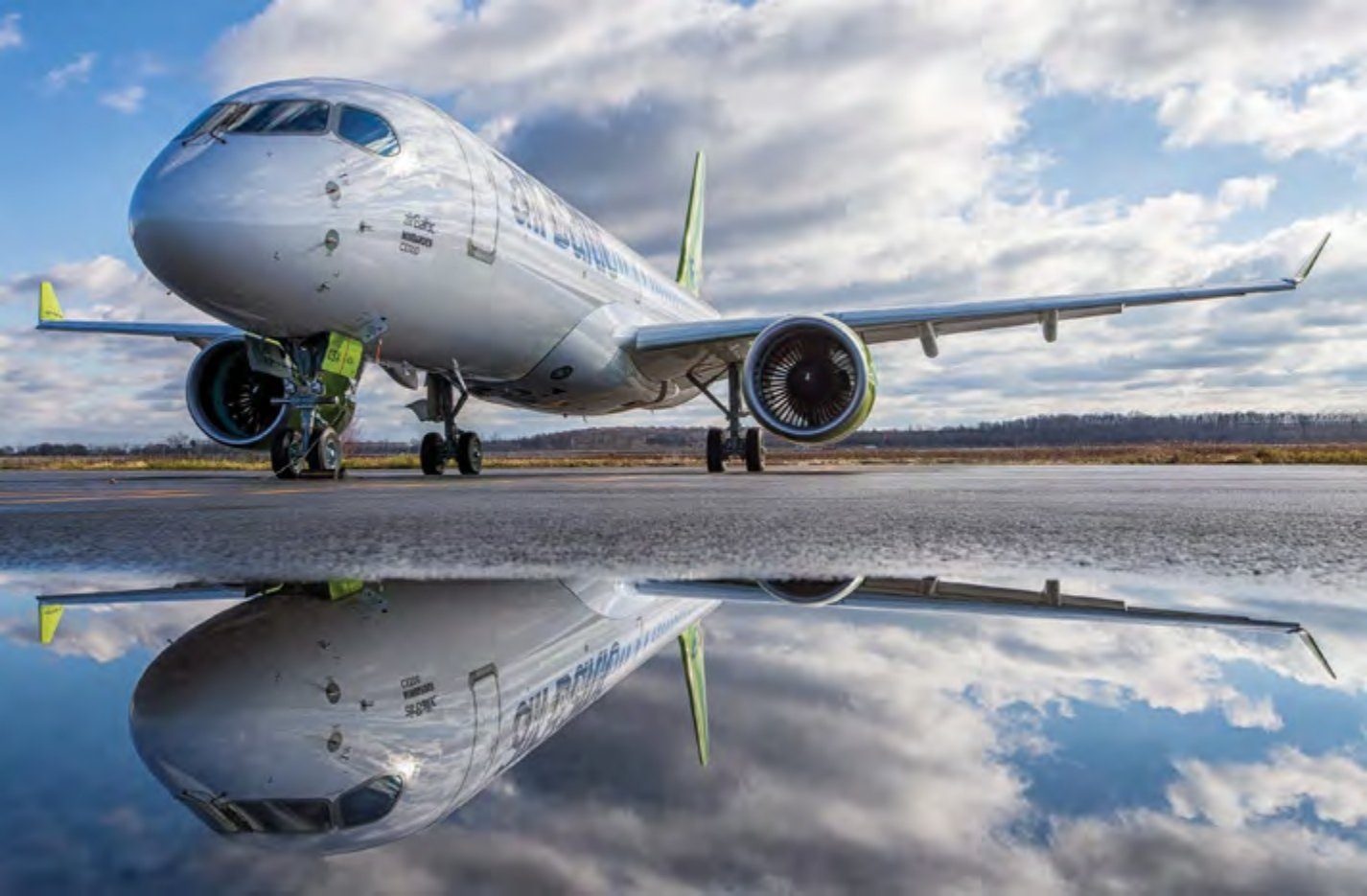 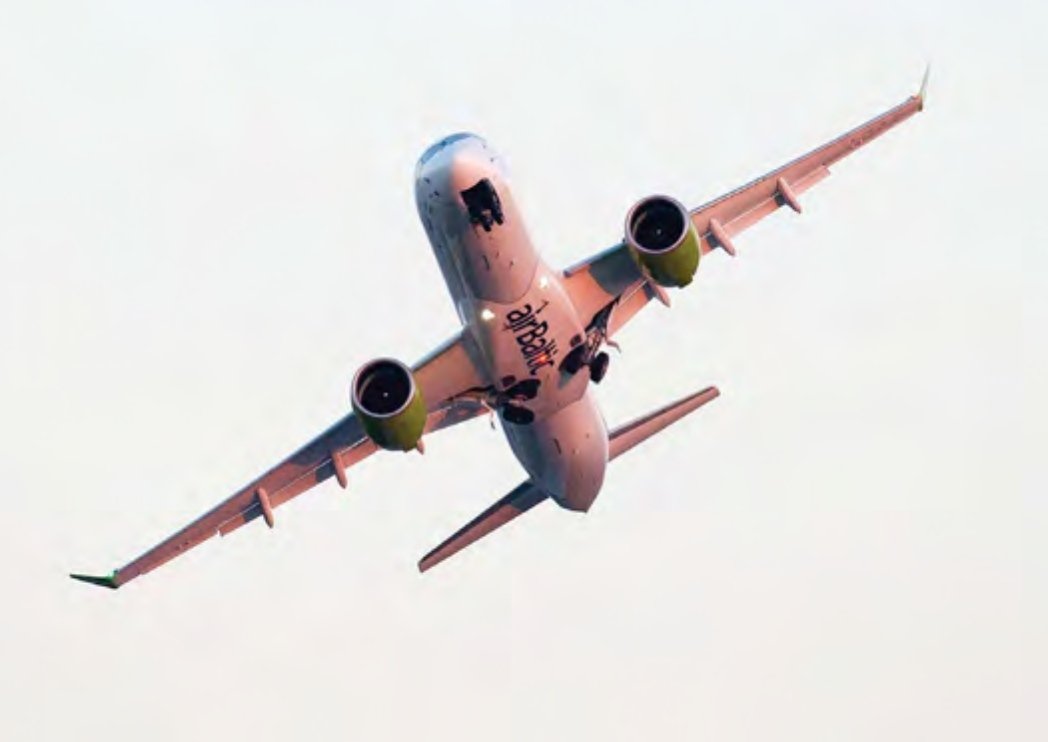 Air Baltic has ordered 20 CS300s. The first route is Riga- Amsterdam but the airline is planning to fly to the Persian Gulf with the new aircraft.
Bombardier Aerospace