Rolls-Royce has developed the Pearl engine rated at 15,100lb thrust specifically for the Global 5500 and 6500.
Rolls-Royce 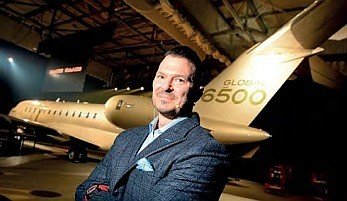 IN A surprise announcement on May 27, 2018, Bombardier Business Aircraft unveiled not one, but two new variants of the Global family of business jets, the Global 5500 and 6500.

The announcement was timed to coincide with the 2018 European Business Aviation Convention and Exhibition, held in Geneva between May 29 and 31.

Global 5500 and Global 6500 aircraft are powered by purposedeveloped Rolls-Royce Pearl engines and feature a redesigned wing, which Bombardier says will deliver ranges of 5,700 and 6,600 nautical miles (10,550 and 12,225km) respectively, and with a maximum speed of Mach 0.90.

The company says the Global 5500 will connect city pairs such as São Paulo and Paris, and Moscow and Los Angeles. Similarly, it says the Global 6500 will be capable of connecting Hong Kong or Singapore with London.

The two aircraft will feature Bombardier’s recently launched Nuage cabin seats and the company’s Vision flight deck, which it says will introduce the “first true combined vision system” that merges enhanced and synthetic images into a single view for presentation to the pilots.

David Coleal, President of Bombardier Business Aircraft, said: “Bombardier’s two newest Global aircraft are the result of our unrelenting commitment to innovation, excellence and, most of all, our desire to deliver unmatched capabilities to our customers … This next generation of performance stems from the winning DNA of our Global family of aircraft, now further enhanced through a newly optimised wing, a fully reimagined cabin and new, purpose-built engines.”

The Pearl engine combines technologies developed through the company’s Advance2 Technology Demonstrator programmes with the proven features of the existing BR700 family of engines. The engine is rated at up to 15,125lb (67.29kN) of thrust (at ISA+15), which is a 9% increase over the BR700 at takeoff thrust, but will be 2dB quieter and deliver a 7% improvement in specific fuel consumption. 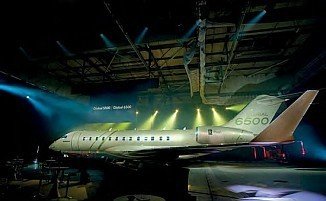 Bombardier surprised the business aviation community with the launch of the Global 5500 and 6500 aircraft.
Bombardier

Chris Cholerton, Rolls-Royce’s President – Civil Aerospace, said: “The Pearl engine is a pioneering product, bringing together the most eco-friendly and efficient technologies available today …The combination of outstanding performance, economy and reliability levels make it the perfect fit for Bombardier’s newest Global aircraft.”