Today the Embraer Legacy family of business jets is made up of three different aircraft, ranging from the newdesign Legacy 450 and 500 midsize executive jets, to the large jet segment 650E. In April 2016, Embraer delivered its 1,000th executive jet, with the handover of an aircraft to Flexjet, a large fractional aircraft company, based in Cleveland, Ohio. Fittingly the aircraft delivered was a Legacy 500, the fourth example to be accepted by Flexjet and the first member of Embraer’s new midsize business aircraft family. The new-design Legacy variants were launched in 2008 and comprise the 2,900nm (5,370km) range Legacy 450 and the 3,100nm (5,740km) Legacy 500, which together with the Legacy 650E, an enhanced variant of the older Legacy 600/Legacy 650 series, make up the Legacy family.

The Legacy family continues to sell strongly in a business aviation market which has been relatively flat since the global business aviation slump in 2008, with recent deliveries to Canada’s AirSprint, which had ordered two Legacy 450s, with options on ten more; and Cedar Executive, the executive jet arm of Middle East Airlines, which accepted its second Legacy 500.

The heritage of the Legacy family can be traced back to the launch of the original Legacy, a large-size executive jet variant of the Embraer ERJ-135 regional airliner, which also spurned the creation of Embraer Executive Jets as a separate division of the company in 2005.

The executive jet family was further expanded with the launch of two new midsize jet programmes in April 2008, with around $750 million allocated for their development. The aircraft would share a similar basic design, featuring a cabin with a flat floor and a height of 6ft (1.82m) and developed with the assistance of BMW Group Designworks, USA.

The two aircraft would be positioned in the midsize jet (MSJ) and mid-light jet (MLJ) market segments, between the Phenom 300 and the (then) Legacy 600 and named Legacy 500 and Legacy 450 respectively at the European Business Aviation Convention and Exhibition (EBACE) in May 2008.

The first of the new aircraft was the Legacy 500, which is capable of carrying between eight and 12 passengers and with a range (with four passengers) of 3,125nm (5,787km).

The prototype Legacy 500 made its first flight from Embraer’s production facility in São José dos Campos on November 27, 2012 and the then president of Embraer Executive Jets, Ernest Edwards, predicted the aircraft would move the company to industry leader in the market.

Edwards said: “The Legacy 500 breaks through the traditional midsize jet envelope to offer something that has never been done before. It is hard to overstate the importance of fly-by-wire technology. Fly-by-wire does for business aviation what GPS has done for navigation. It will empower more precision, efficiency, safety and comfort.”

1 The largest Legacy variant, the 650E, is aimed at the large jet sector and is capable of seating up to 14 passengers.
Nigel Pittaway

The aircraft made its world debut at the EBACE show in Geneva in May the following year and entered production in 2014. The first year of full production followed in 2015 and Embraer delivered a total of 20 aircraft to customers, representing almost 50% of the midsize market. The current list price is $20 million and by the end of 2016, the company had sold over 30 in total.

Embraer Executive Jets’ Manager of Product Strategy, Alvadi Serpa, explained: “The Legacy 450 and 500 are the newest airplanes in our portfolio, clean sheet design airplanes. The two have a lot of commonalities; they are close to 95% common. It’s the same technology, the same [Honeywell HTF7500E] turbofan engine and the same wing, the only real difference is the cabin length.

“Because of the longer cabin we have installed another two seats and a divan in the rear, so the maximum seating capacity is 12 passengers.” 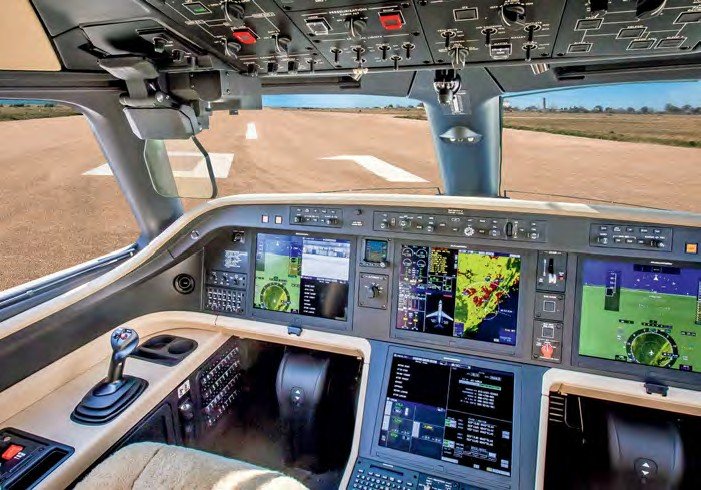 Serpa said the main competitor in the MSJ sector is the Citation Sovereign but because of the size of the cabin, Embraer is seeing competition from the supermidsize jet sector, such as the Bombardier Challenger 350 and Gulfstream G280.

“The Legacy 500 is certified to operate from London City Airport, so it’s a steep approach capable airplane, it has a vacuum toilet as standard and the only wet galley in its class,” Serpa said.

“We have already certified the airplane in over 15 different countries and next we’ll be certifying it in Russia and China.”

In the Asia-Pacific region, actor Jackie Chan is the launch customer for the Legacy 500 in China and another is based in Australia, operated in north Queensland.

Following the Legacy 500 by a year, the Legacy 450 made its maiden flight from São José dos Campos on December 28, 2013 with a one hour, 35 minute sortie which evaluated the aircraft’s handling and performance characteristics.

The aircraft is priced at $16.6 million and capable of carrying up to eight passengers. Brazil’s civil aeronautics authority (ANAC) granted type certification to the Legacy 450 in the middle of 2015 and this was followed by US Federal Aviation Administration certification on August 31 that year. The first three production aircraft were delivered to customers in December 2015.

When initially conceived, the Legacy 450 had a range of 2,300nm (4,260km), but it was announced at the North American Business Aviation Association’s Business Aviation Convention and Exhibition in 2013 that this had increased to 2,500nm (4,630km). In November 2016, Embraer again announced a range increase for new production aircraft, this time to 2,900nm (5,370km) with four passengers, following minor modification to the wing structure to enable more fuel to be uplifted and adjustment to the engine fuel control units.

Serpa said: “With a price tag a little less than double our Phenom 300, the Legacy 450 gives you the best range in its class. Two thousand and nine hundred nautical miles is enough range to fly from Teterboro in New Jersey to Los Angeles, or even Los Angeles to Honolulu and I’m talking about both directions. It has an excellent hot and high performance, with very minimal degradation when taking off at high elevation airports.

“The Legacy 450 is also certified for London City and it is the biggest airplane capable of operating in and out of La Môle St Tropez, which is a very critical airport in the French Riviera.”

Total sales of the Legacy 450/Legacy 500 family had reached 50 by early 2017 and Serpa said Embraer’s goal is to achieve the same level of acceptance in the market that the company has won with the smaller Phenom 100/Phenom 300 family.

He said: “The Legacy 450 is the only aircraft in its category offering full flyby- wire, there is no other aircraft in the market priced below $50 million which has fly-by-wire technology. So that was a real breakthrough for the industry, when it comes to safety, operational capabilities and so forth.”

Embraer’s entry into the business jet market was via the Legacy Executive, developed in the early years of the last decade from its successful ERJ-135 regional aircraft.

Although not a clean-sheet design like its younger siblings, the aircraft is still in production today, albeit in enhanced form as the Legacy 650 and by the end of 2016 over 280 had been sold.

The design is aimed at the large jet sector of the business jet market and is priced at $25.9 million at today’s list prices. It is capable of seating up to 14 passengers in a three-cabin zone interior and with a brochure range of 3,900nm (7,223km), carrying four passengers.

Serpa said the regional airliner heritage of the basic design has made it a very reliable aircraft, with a dispatch reliability rate in excess of 99.5% and a low lifecycle cost of ownership.

“Because of that we see several charter companies and air taxi operators using this airplane for revenue generation and we recently extended the warranty from six years to ten years,” he explained.

“This airplane has the longest warranty in the industry – there is no other business jet which has such a long warranty [and] I think it’s an endorsement of our confidence in the platform.”

“The 650E first deliveries will occur in 2017 and we have lowered the price of the aircraft because, in the current market scenario, we find that we are making it on to a company’s shortlist by starting at a lower price,” Serpa continued.

“It has a large cabin with a low operational cost and it’s very reliable. It’s a workhorse at the end of the day.” With the Legacy 450 and 500, the Phenom 100 and 300 and the ultra-large Lineage 1000E (based on the E190 airliner), Embraer has introduced six new business jet aircraft to service just in the last six years and, given the long heritage of the Legacy 650 design, it might be assumed that this will be the first to be replaced. Not necessarily however, according to Serpa. 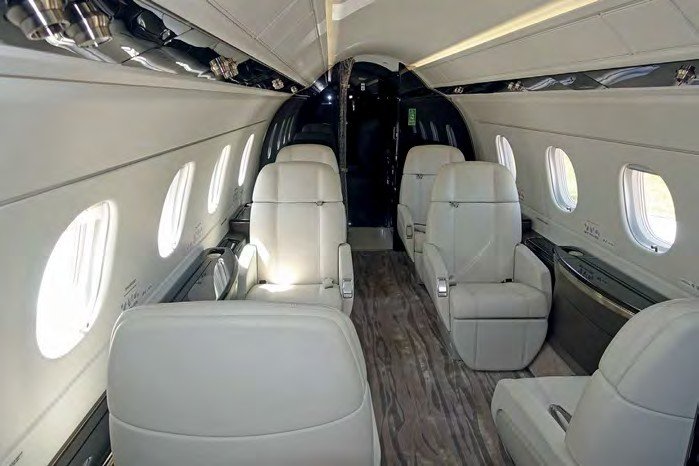 3 The interior of Legacy 450 PR-LKN at Embraer’s Sao Jose dos Campos production facility. This variant can seat up to eight passengers and has a 2,900nm ( 5,370km) range.
Nigel Pittaway

“Perhaps the 650 will be the first to be replaced and that would be a natural movement, but it’s not necessarily what we will do,” he explained. “Because if you look at the ultra long range market, that’s where the money is – a small number of units, but costing large amounts of money and with a huge profit margin, and that’s a very attractive segment.”

Because of their heritage designs, final assembly of the Legacy 650E and Lineage 1000E is still carried out at São José dos Campos, but production of the Phenom family and Legacy 450 and 500 has now been relocated to the United States, to a purpose-built facility in Melbourne, Florida. Production of the Phenom 100 and 300 began in the US in 2011 and Legacy 450 and 500 final assembly was launched with a ribbon-cutting ceremony at the facility in June 2016.

Claudio Camelier, Embraer Executive Jets’ Vice President of Marketing and Sales, Middle East and Asia-Pacific, said: “The production of these airplanes was carried out at São José dos Campos and it’s a facility where we don’t have a lot of real estate, or a lot of space available. With the introduction of our E-Jets E2, our commercial colleagues needed more production capability so, in terms of industrial strategy, it made sense to release some area in São José dos Campos, so that E-Jet production can grow and we can concentrate our business jet production in the US.

“Most of our suppliers are in the US, so we save a lot on logistics costs and the US represents two-thirds of the worldwide market for business jets, so being close to our customers is also a very important aspect.” 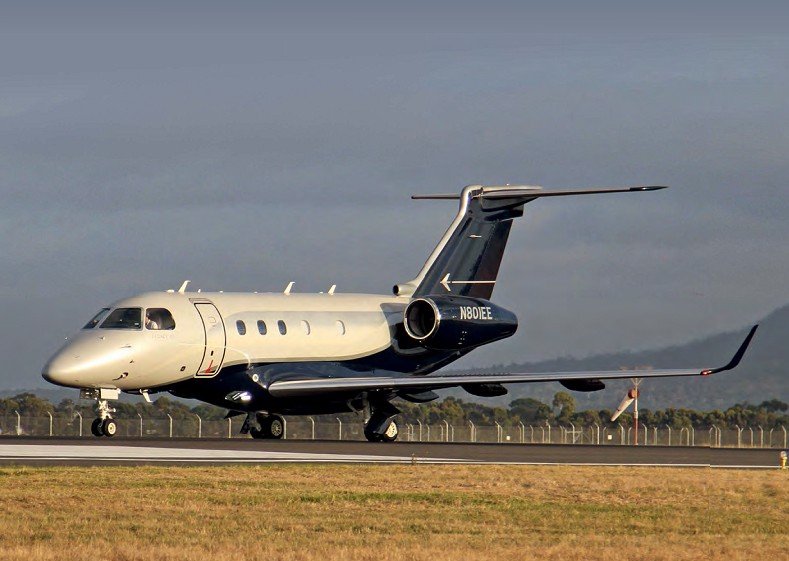 4 Legacy 450 N801EE photographed at Avalon in Australia. This model is priced at $16.6 million and capable of carrying up to eight passengers.
Nigel Pittaway