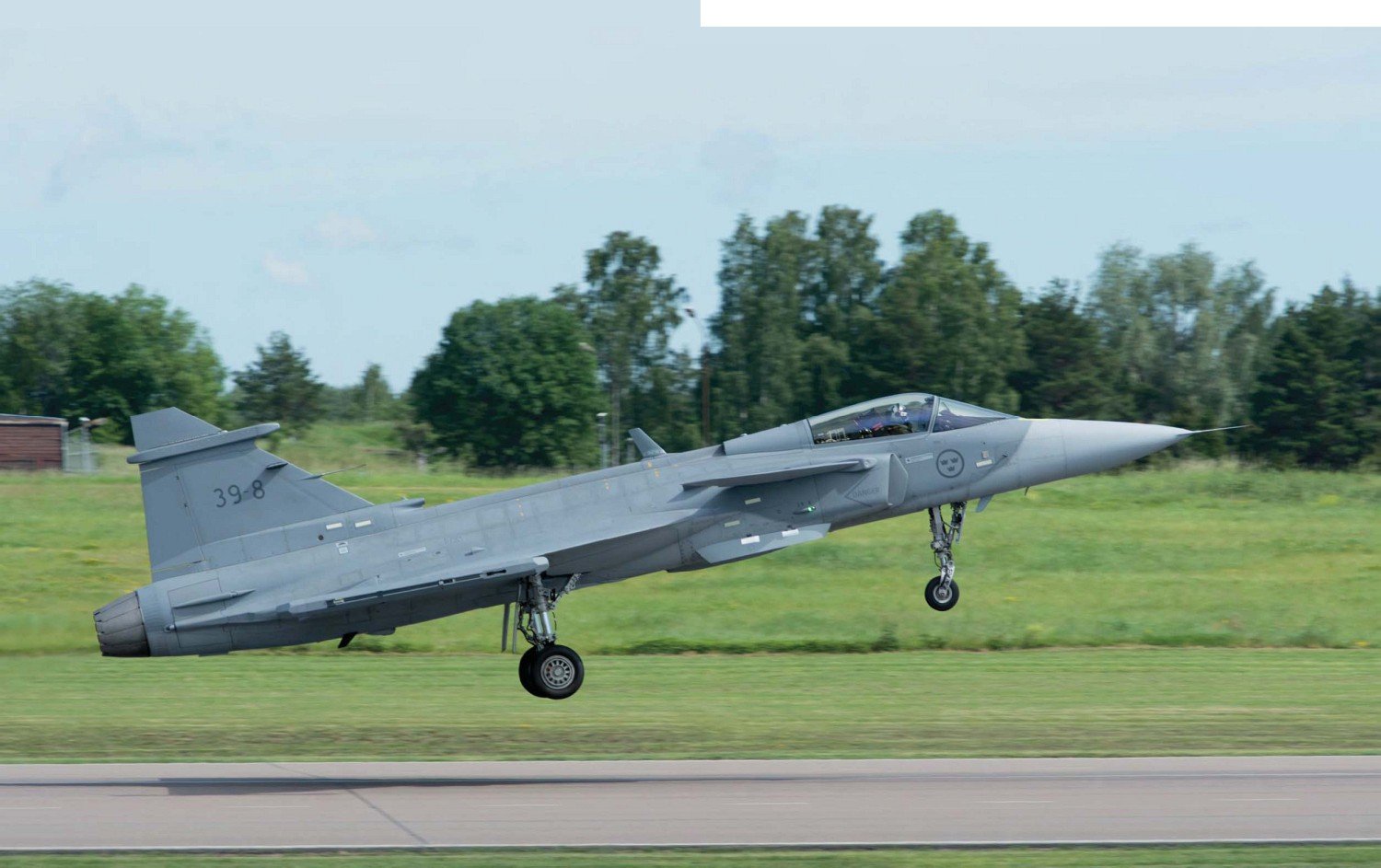 When officials from the Comando da Aeronáutica Força Aerea Brasileira’s finally signed a contract to buy 36 Gripen E/F fighters on October 27, 2014, it represented the close of a troublesome chapter in the South American nation’s F-X2 fighter programme. To date, Saab’s involvement with bidding for Brazil’s new fighter go back to the late 1990s. October 28, 2014, was the start of a new chapter in F-X2 and Saab’s first day on contract to the Força Aerea Brasileira.

Saab’s Director and Head of the Brazilian Gripen programme Mikael Franzén has been with the programme since 2014 and outlined some of the details: “The deal comprises everything required from a Gripen system: 28 single-seat Gripen E and eight two-seat Gripen F aircraft. Brazil is the first customer for the Gripen F; Sweden has no immediate requirement for the variant, since it has a fleet of Gripen Ds. Two of the aircraft, one single-seat and one two-seat, will be equipped with flight test instrumentation for future development. We’re also providing a weapons and targeting pod package, and operational support equipment like a mission planning system, image analysis, rigs to test different system components, maintenance systems and simulators, spares, publications and test equipment.

Discussing the training aspects of the deal, Mikael Franzén said: “We are training the initial cadre of maintenance personnel and pilots, personnel who will eventually train others back in Brazil. This is part of the extensive technology transfer programme, which in total comprises training 350 people here in Sweden over the course of the entire programme: engineers, production personnel and pilots. To date, 165 people have completed their training and are now back in Brazil doing development work for the Gripen programme.”

In a joint effort between Saab and the Svenska Flygvapnet, the first batch of Força Aerea Brasileira instructor pilots will be trained in Sweden in the period leading up to delivery of the first aircraft in 2021. Traditionally, the Svenska Flygvapnet has trained foreign Gripen pilots at the Gripen Conversion Unit with F7 at Såtenäs Air Base. Though this is the most likely training arrangement available, given that the Svenska Flygvapnet will receive its first Gripen Es during the same timeframe as Brazil, the final decision on this arrangement has yet to be announced.

Other elements of the package are a design and development centre located in Gavião Peixoto outside São Paulo, awkwardly called the Gripen Design and Development Network (GDDN). The GDDN is Brazil’s central hub for Gripen development work that includes vehicle systems, airframe design and systems installation, system integration, avionics, human-machine interface and communications. Development work at Gavião Peixoto is being undertaken for both the Swedish and Brazilian programmes, the largest element of which is the two-seat Gripen F.

In addition to the GDDN, an aerostructures plant at São Bernardo do Campo, also outside São Paulo, will produce Gripen subassemblies, and a final assembly facility also at Gavião Peixoto will eventually assemble some of the Gripen fighters produced for the Força Aerea Brasileira.

Brazilian company AEL Sistemas based in Puerto Viejo is producing four of the Gripen’s displays (main, wide-area, head-up and helmet-mounted) through the technology transfer programme, though the company was already established in the avionics sector.

The main and wide-area displays have been developed and tested by AEL Sistemas as part of the parallel development programme with Sweden’s FMV, and in 2018, the Svenska Flygvapnet decided to equip its Gripen E fighters with AEL Sistema’s wide-area, headup and the helmet-mounted displays.

Mikael Franzén described Brazil’s technology transfer programme as an extensive one that includes 60 projects in different areas. Brazil is involved in nearly all aspects of the Gripen’s development, including airframe and vehicle systems design. For example, Aker, a company that specialises in structural design, analysis and installation design is involved with both Gripen E and Gripen F development.

Saab’s training programme is structured to enable Brazilian personnel to attend courses at Linköping to learn about design methods and processes relevant to their respective trade, followed by on-the-job training on development work for the Gripen E. All those who attend are selected from the ranks of the Brazilian aeronautical companies by leaders from Saab and the companies involved; all of the engineers selected are skilled in aeronautical engineering. Terms spent training in Sweden vary depending on the skill category; some personnel stay for a year and others for up to two years.

Saab also provides Brazilian companies with development work packages. These enable Brazilian personnel to work in the Gripen design centre at Gavião Peixoto, which has an encrypted link to Linköping.

Engineers at both locations can work on the same models; for example, an airframe model in CATIA can be worked on in both Gavião Peixoto and Linköping.

Once that phase was complete, the engineers returned to Puerto Viejo where they completed detail design, and built the system.

In another example, Mikael detailed a similar set up for simulators with Atech, an Embraer-owned Brazilian company.

Following academic courses and on-thejob training at Linköping, the individuals returned to São Paulo from where they are building and installing parts in the simulators at Brazil’s Gripen design centre.

Back at Aker, the company is designing the rear fuselage and has approval authority for its own design work, deeming it airworthy and cleared to be placed in the Gripen model.

Brazil’s first Gripen aircraft, 396001, is fitted with flight test instrumentation. The aircraft will be used to test Brazilian-specific systems at Linköping and will eventually be delivered to Brazil for follow-on test and evaluation. The aircraft is nearing its first flight; the specific date is not known. Saab personnel get twitchy about discussing any likely date, but a maiden flight prior to this year’s big aerospace trade show at Le Bourget, France, in June, seems a good bet. All aerospace companies enjoy nothing more than a bigticket news item to show programmes are on track.

Brazil’s Gripen programme is the biggest technology transfer Saab has ever undertaken. One of the biggest associated risks to the transfer programme in the initial stages was the ability to find sufficient numbers of skilled aeronautical engineers in Brazil. According to Mikael Franzén, plenty of suitably qualified aeronautical engineers were found creating a really good start to the programme. Saab is eager for the Gripen E to complete its developmental testing and enter service with both the Svenska Flygvapnet and Força Aerea Brasileira. The company appears to have done a good job with developing Gripen E and deserves to win further orders. Switzerland or Finland might give Team Gripen that reward.