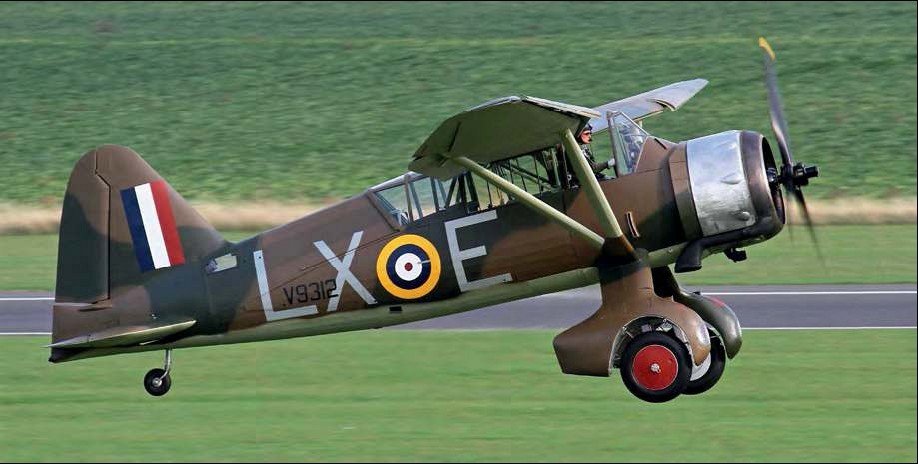 Wearing its original No 225 Squadron code letters, Westland-built Lysander IIIa V9312 gets airborne briskly with John Romain at the controls at Duxford on 28 August. DAVID WHITWORTH

Following a 15-year rebuild, the world’s only airworthy British-built Westland Lysander, V9312/G-CCOM, lew at Duxford on 28 August with John Romain at the controls. Owned by Propshop Ltd, the ‘Lizzie’ has been restored by both full-time and volunteer engineers at the Aircraft Restoration Company (ARC).

Work began in June 2003, when ARC stalwart John ‘Smudge’ Smith got started on the complete renewal of the woodwork. The fuselage was rebuilt in one of Duxford’s brick outbuildings, and John Romain and Tom Clarke rebuilt the Bristol Mercury XX engine.

‘Smudge’ is currently working on a pair of undercarriage spat-mounted winglets, which will be itted with bomb racks following installation. The machine is scheduled to make its public debut in the Freddie March Spirit of Aviation concours d’elegance at the Goodwood Revival meeting from 7-9 September.

Built by Westland Aircraft at Yeovil in 1940 as the 32nd production Lysander IIIa, V9312 was delivered to No 33 Maintenance Unit on 4 January…1941 and served with No 225 Squadron during 1941 at RAF Tilshead, near Warminster, Wiltshire. The unit was engaged on patrols along the Hampshire coast and the Isle of Wight, and from May 1941 also provided air-sea rescue cover. It was subsequently operated by No 4 Squadron on coastal patrols and air-sea rescue duties at Clifton, near York, where it suffered damage on 26 April 1942.

During repairs it was converted to target tug coniguration and exported to Canada, being taken on charge with the Royal Canadian Air Force in October 1942 and operated as part of the Commonwealth Air Training Plan as a tug at Mossbank, Saskatchewan. It lew for the last time in RCAF service on 30 December 1944 and was sold off in October 1946, ending up on a farm in Saskatchewan before being acquired by aircraft collector Harry Whereatt and moved to his farm in Assiniboia during 1972. Kermit Weeks purchased the ‘Lizzie’ for his Fantasy of Flight Museum in Florida in August 1991, but following his acquisition of the airworthy, ARC-operated, 1942 Canadian-built Lysander G-BCWL from its owner Brian Woodford in 1998, Weeks sold the far more historic — and untouched — V9312 to ARC during 2003.

All the other Lysanders that have lown during the preservation age were built in Canada by the National Steel Car Corporation plant at Malton Airport, just north of Hamilton, Ontario. Amazingly, one other former No 225 Squadron Lysander survives:the RAF Museum’s MkIII, R9125, was delivered to Tilshead on 29 September 1940 coded LX-L, and logged 36 coastal patrols before being withdrawn in April 1941 with a cracked engine mount. It is under restoration in the Michael Beetham Conservation Centre at Cosford.