In last month’s column I wrote on the first flights of several notable British aircraft types. Many such prototypes had relatively short lives since they were meant primarily to evaluate the design’s flying characteristics and often lacked the full equipment fit, thus being unrepresentative of the intended production standard. As a result, they met their end — whether by accident, honourable retirement, relegation to nonflying duties or being parked in the long grass at the back of the hangar where nobody would see them again — without their significance becoming apparent and before museums had a chance to bid for them.

Wartime brings its own exigencies, but few significant British first prototypes from World War Two have survived. Mosquito W4050 at the de Havilland Aircraft Museum near London Colney and E28/39 W4041/G in London’s Science Museum are two welcome, if rare, exceptions. What, you may ask, became of Hurricane prototype K5083, Lancaster prototype BT308 or Spitfire prototype K5054? Records suggest K5083 remained airworthy until 1942, BT308 suffered the indignity of having a Metrovick F2 turbojet inserted in its rear fuselage before being struck off charge in 1944, while K5054 suffered a fatal crash at Farnborough in 1939. As a result, all three disappeared without trace. Or did they?

I learnt more of K5054’s demise in discussions with Dennis Higton, an old family friend who sadly passed away in 2012. Dennis was, in 1939, an 18-yearold Royal Aircraft Establishment apprentice at Farnborough, but his subsequent career progressed to high Air Ministry posts including director-general of aircraft. By the summer of 1939, K5054 had been quite substantially modified from its first flight configuration. Its finish of natural metal and chromate primer had given way by late March 1936 to an overall highgloss light blue (some say light grey — the debate continues) scheme. In September 1937, after it had been fitted with a Merlin II engine with projecting exhaust stubs and a dark earth/ dark green camouflage scheme applied, the aircraft conformed quite closely to the Spitfire I production standard. In this form, it was used on trials at Martlesham Heath and then at Farnborough.

Dennis Higton took home one steel wing bolt from K5054. After it had spent a long time in his workshop, he fashioned it into a hammer head 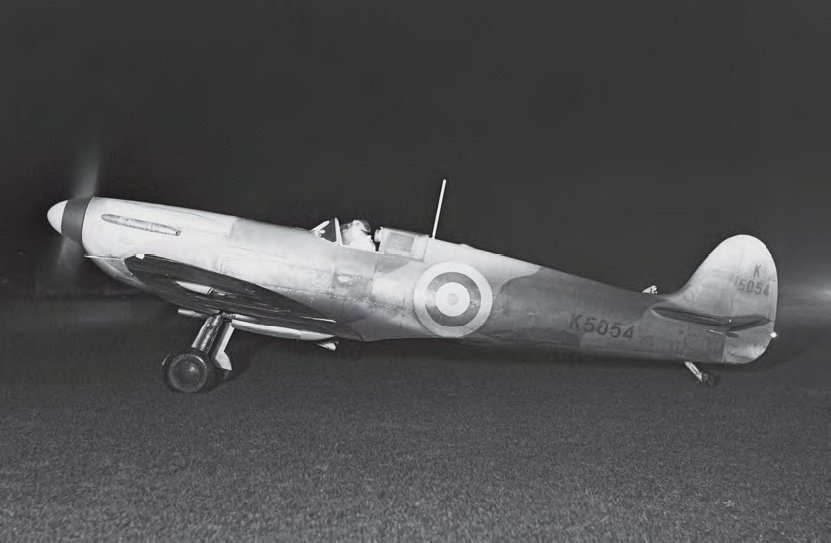 It was on 4 September 1939, the day after Britain’s declaration of war on Germany, that Flt Lt Gilbert Stanbridge ‘Spinner’ White took off on a test flight involving a new design of spark plug. Landing back on the Farnborough grass, the aircraft bounced, the tail lifted and it went over on its back. Dennis recounted watching the crash which, first impressions told him, looked survivable, but White suffered injuries from which he died in hospital the next day.

Subsequently, Dennis and another RAE apprentice were assigned the task of dismantling K5054 as part of their education, “to see how a modern aircraft is put together”. The two of them worked in the open with the aircraft outside a hangar, with strict instructions to record everything they did and the order in which they did it. Over a period of three weeks, the engine was removed, the fuselage supported such that the wings could be taken off by crane, the airframe taken apart and cockpit instruments carefully extracted, every stage being recorded on an engineering change form. Dennis remembered eventually sitting in K5054’s pilot’s seat in a cockpit all but devoid of instrumentation.

What happened to all these components? Nothing is known on this subject, but Dennis did take home with him one steel wing bolt, “about 12in long and 1in in diameter”. After this piece of metal had spent a long time in his workshop, he decided to make use of it and fashioned it into a (much smaller) metalworker’s hammer head. Realising its significance, some 10 years ago he presented it to the Solent Sky museum in Southampton, very close to the Supermarine works at Woolston where K5054 was built. Dennis recalled that this, generally accepted as the one and only surviving relic of a highly significant aircraft, was always referred to as ‘’igtons ’ammer’.